Sometimes it feels that a day doesn’t go by without another author penning another set of rules for writing.  But if I were ever to pin a maxim above my desk, it might not be a writer’s rules, but a graphic designer’s: Abram Games’ characteristically pithy definition of good design, ‘maximum meaning, minimum means’. 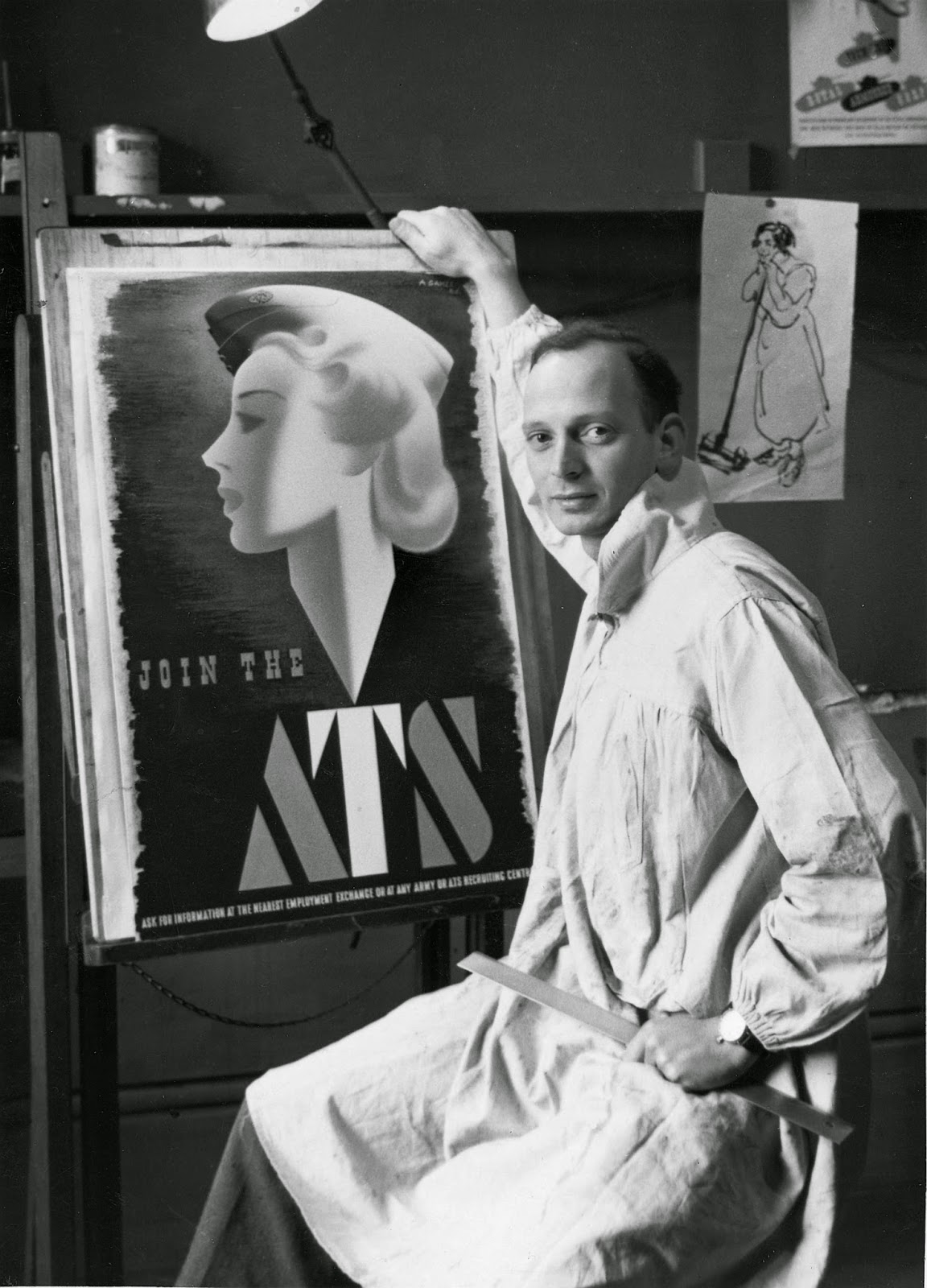 Who is Abram Games?  You may think you’ve never heard of him, but I’m sure you’ll recognise his posters.  He produced some of the most iconic images of the twentieth century, from the Festival of Britain logo to the controversial ‘blonde bombshell’ ATS recruiting poster.

I was drawn to the centenary exhibition currently on at London’s Jewish Museum because he produced exactly the kind of war posters which influenced both the cover design and content of my last two books, ‘A World Between Us’ and ‘That Burning Summer’, and also because I saw parallels between Games and the life I imagined for my fictional hero, Nat Kaplan.  I discovered at the museum a remarkable man who, like so many of his generation and background, owed his greatness partly to his bloody-mindedness.

He was determined individualist who believed firmly in ‘the people’.  Naomi Games, who last month gave a fascinating talk about her father, once asked him why the profiles he used in his posters always faced left.  He clearly thought the answer was obvious.  Games was a lifelong socialist, though never a member of any political party.  Like my Nat, the International Brigade volunteer in ‘A World Between Us’, he was born in Whitechapel with East European origins.  His photographer father was born in Latvia, while the family of his seamstress mother, who made his painting smocks, came from Łódź.

Of course Games was at Cable Street on 4th October 1936, when the East End famously blocked Mosley’s Fascist march.  By 1939 he was producing posters for the Spanish War Relief Fund. 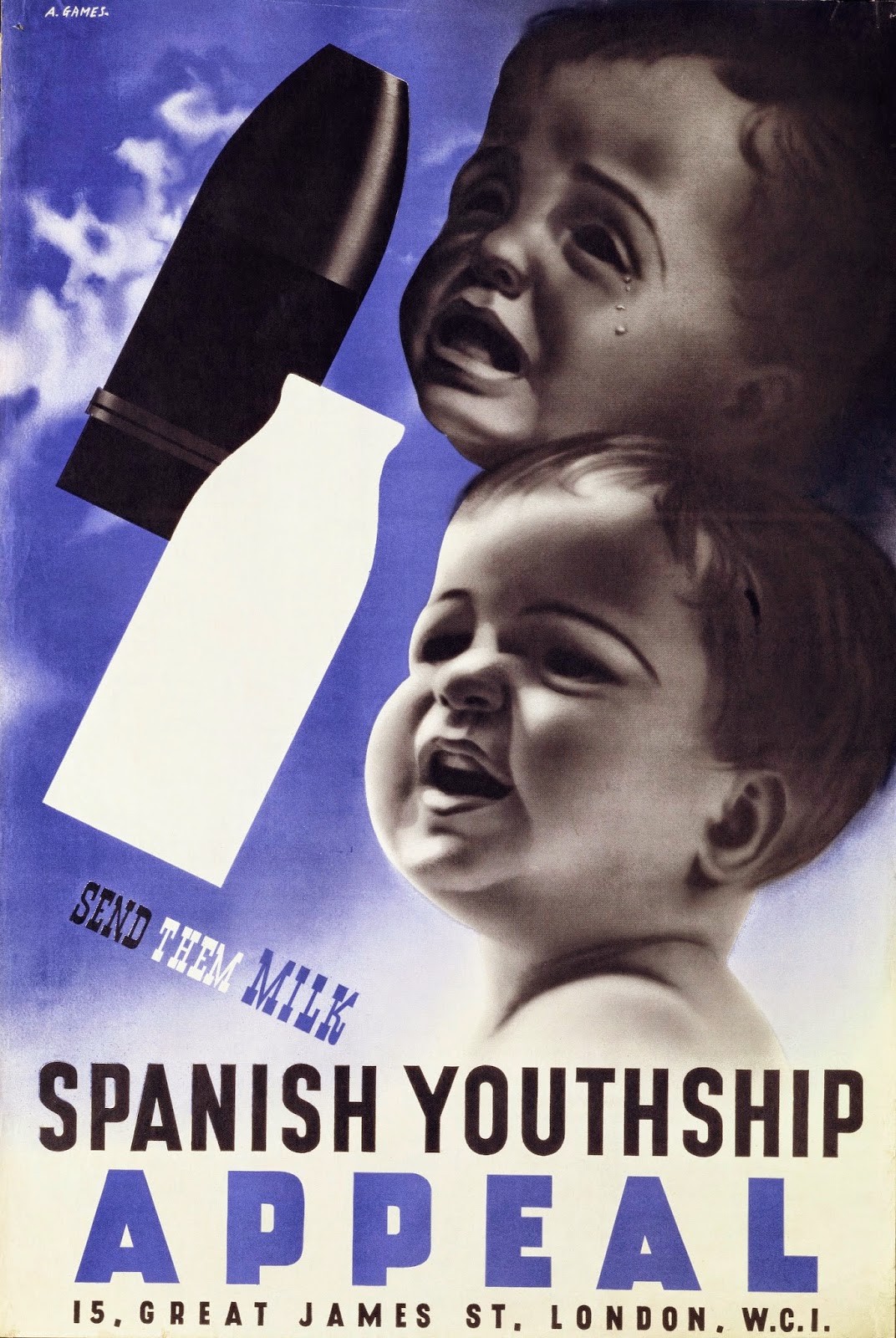 This Spanish Youthship Appeal, bearing the message ‘Send them milk’ shows his genius for visual pun – a white milk bottle perfectly echoes the shape of the black bomb, a light and smiling baby’s face gazing at one, a dark, crying infant terrified by the other.  Years later, in 1962, his ‘Freedom from Hunger’ poster series for the UN would turn ears of wheat into the ribs of a starving child, a juxtaposition of even greater and more startling economy. 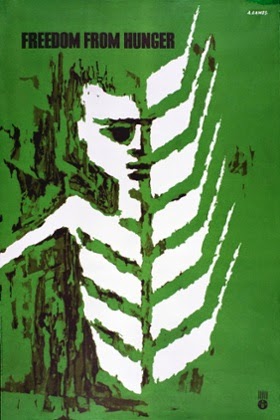 He used an airbrush for the Spanish poster  - an effect evoked by Jan Bielecki on my Hot Key book covers - and this remained his favoured technique until the late '50s.  He’d learned it in his father’s photography studio, where his job was to touch up photographs, adding colour tints and, well, ‘airbrushing’.  Apparently he was such a virtuoso with the tool he even used it to sign cheques. (His father’s 1918 airbrush pencil is in the exhibition, and there will be an airbrush demonstration at the museum on November 11th.)

Naomi Games mentioned the influence of the 1936 Surrealist exhibition in London on her father and his contemporaries.  You can see it, for example, in the transformation of the Houses of Parliament into a writing hand casting a vote, in a wartime poster designed to encourage the armed services to perform their civic duties too: ‘Serve as a soldier, vote as a citizen.’  Hands and faces appear frequently in Games’ posters; they are, after all, invaluably expressive devices.  Call me monothematic, but it struck me that there was another obvious influence on Games - the poster art of the Spanish Civil War.  Designed for a largely illiterate population, these images also often feature hands and faces, and rely on the briefest of texts for their effect.  Their bright colours and modern graphic style had an enormous impact on British volunteers, including Orwell, who arrived in Barcelona in December 1936 and wrote in Homage to Catalonia of the revolutionary posters that ‘were everywhere, flaming from the walls in clean reds and blues that made the few remaining advertisements look like daubs of mud.’ There’s an excellent collection in the Imperial War Museum in London, which also houses some of Games’ best work, and you can see and find out about the Southworth Collection in this brilliant online exhibition, The Visual Front. 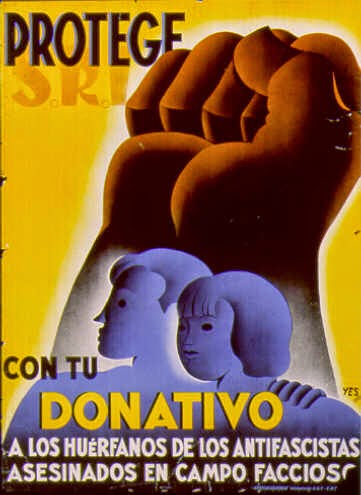 This poster asks for donations to protect the orphaned children of anti-fascists, while below, a collage of fists, factory and fighter plane exhorts competitions at work to spur on industrial production to help the Republican war effort. 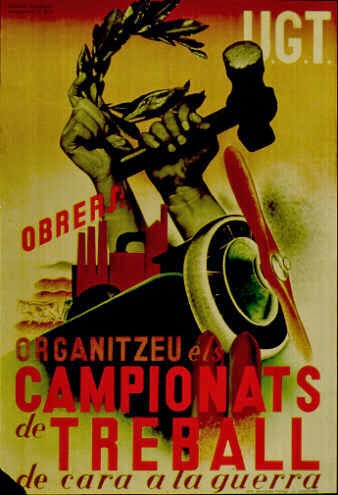 The only person in British army history ever to have the title ‘Official War Poster Artist’, Games' persuasive visual shorthand was exceptional.  He made over 100 posters, conveying exactly the kind of messages that make twelve-year-old Ernest so anxious in my novel, That Burning Summer. When Games began infantry service in 1940 he was horrified by the dull, monochrome and ineffectual information posters he saw plastered on the walls of army barracks.  Soon he was able to replace them with colourful, succinct, emotional appeals about health, cleanliness, pilfering, rumour and countless other aspects of wartime life. 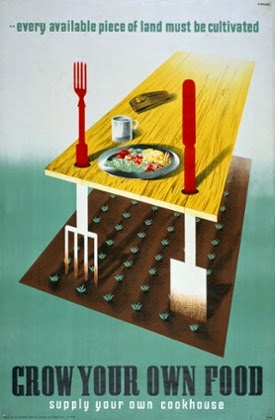 Several of Games’ designs were rejected for being ‘too Soviet’.  A few brought him into open clashes with the authorities. Bevin actually ripped one off the wall of a public exhibition. The text was patriotic enough: ‘Your Britain … fight for it now’.  But the image clearly stated that it was the new progressive Britain, embodied in modern public architecture, that was worth fighting for, not the old, socially divided nation, which Games represented by a child with rickets in a lightless city slum.  Churchill banned the poster, calling it a “Disgraceful libel on the conditions prevailing in Great Britain before the war… the soldiers know their homes aren’t like that”; his lack of recognition of the real conditions facing returning soldiers no doubt helped him lose the 1945 election.  Now malnutrition and poverty is bringing rickets back into Britain’s GP surgeries while the pioneering Lubetkin-designed Finsbury Health Centre shown in the poster has recently fought off demolition threats.  The image has acquired new resonance. 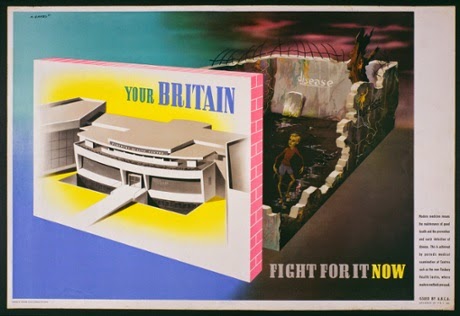 Games’ brain seemed to work in slogans; the texts he wrote himself were as minimalistic as his images.  ‘I am not an artist.  I am a graphic thinker,’ he said. ‘The harder I work, the simpler it looks.’  It was only when he began to work for London Transport that he realised his ambition of an entirely word-free poster.  But even so, as Naomi Games discovered when she began to scrutinize her father’s work with a magnifying glass, he managed to hide lettering in almost all his posters, quietly and lovingly scattering everywhere the initials of his wife, his children, and even his lover.

‘It is permissible to break all the rules…but only successfully.’  This statement from Over my shoulder, a book in which Games set out his professional philosophy, is reproduced on one of the museum’s walls.  Like so many of Games’ working rules, it has application far beyond the field of graphic design.  He always had to balance work for the causes in which he believed with work for commercial clients, like Guinness, the Financial Times, BOAC and the Jersey Tourist Board.  For this last commission he was asked if he could ‘do’ a girl in a bikini on a beach. Yes, he replied, and went away to produce his playful and prize-winning designs in which the letter ‘J’ is transformed into deckchairs, shells and sticks of rock.  ‘What happened to the girl in the bikini?’ they asked. ‘I said I could do it.  I didn’t say I would.’

I laughed when I saw his comment: ‘I do my best work for Jewish causes, and they give me most trouble.’  I wanted to cheer when I read, in Over My Shoulder, ‘We have seen the results of the sell-out to the client on a grand scale in Nazi Germany, in other dictatorships, and in Russia and the satellite countries, where designers are held under rigid control.  A designer must therefore be convinced that what he is doing is right, not only for himself but for his fellow men.’  (Some things are too important to reduce to a slogan.)  An autodidact whose old school report stated that he was ‘weak’ at drawing, Games didn’t believe in art schools.  Yet for seven years he taught one day a week at the Royal College of Art, where another set of initials provided another working maxim.  A designer has to work with the ‘three cs’ he told his students – Curiosity, Courage and Concentration.  But don’t forget the Cash and the Cheques, Games would add, ever the idealistic pragmatist. 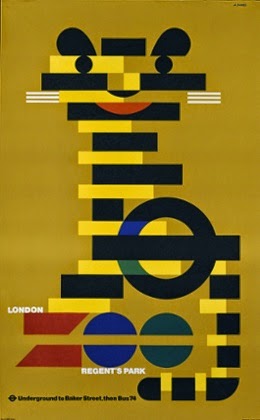 All Games posters © Estate of Abram Games
Posted by Lydia Syson at 00:01

Lydia, what a brilliant post! I knew nothing of Games, though I recognise the Festival poster. This is an excellent introduction. (He seems to have an admirable attitude!)

‘It is permissible to break all the rules…but only successfully.’
and
"Curiosity, Courage and Concentration"

This is fascinating, Lydia. The posters are so clever. Several are familiar, though not the lovely tiger at the end. I remember being taken to the Festival of Britain when I was seven. But I never knew who had designed these posters, and never had the chance to look so closely at them before. (I've also been admiring the smock his mum made for him.)

Very glad you liked it! And his mother also made him special 'arm gaiters' to keep his cuffs clean.

Thank you for this, knew the art but not the artist - very interesting.

Just about the left-facing profiles - I used to draw people a lot - still do, in doodles - and if they're in profile, they always face left. Don't know why - perhaps left-handed people draw them the other way?