For me history’s appeal doesn’t lie in the grand sweep of events. I’m not particularly interested in kings and politicians, or  empires rising and falling.  It’s the small things, the ordinary people living through extraordinary events, the humdrum details of their daily lives that I find fascinating.  I suppose that my interest in history really began at home.

My mother (now in her seventies) recently went to see a concert - a ‘work in progress’ – on the theme of the First World War.   Afterwards the audience were invited to send in  their own stories and experiences.   This is what she wrote:

“My grandfather (John Edward Avery, pictured below) was a Cornish mining engineer, working in Johannesburg at the outbreak of the Boer War. He had many friends in South Africa of all cultures, whom he refused to fight. 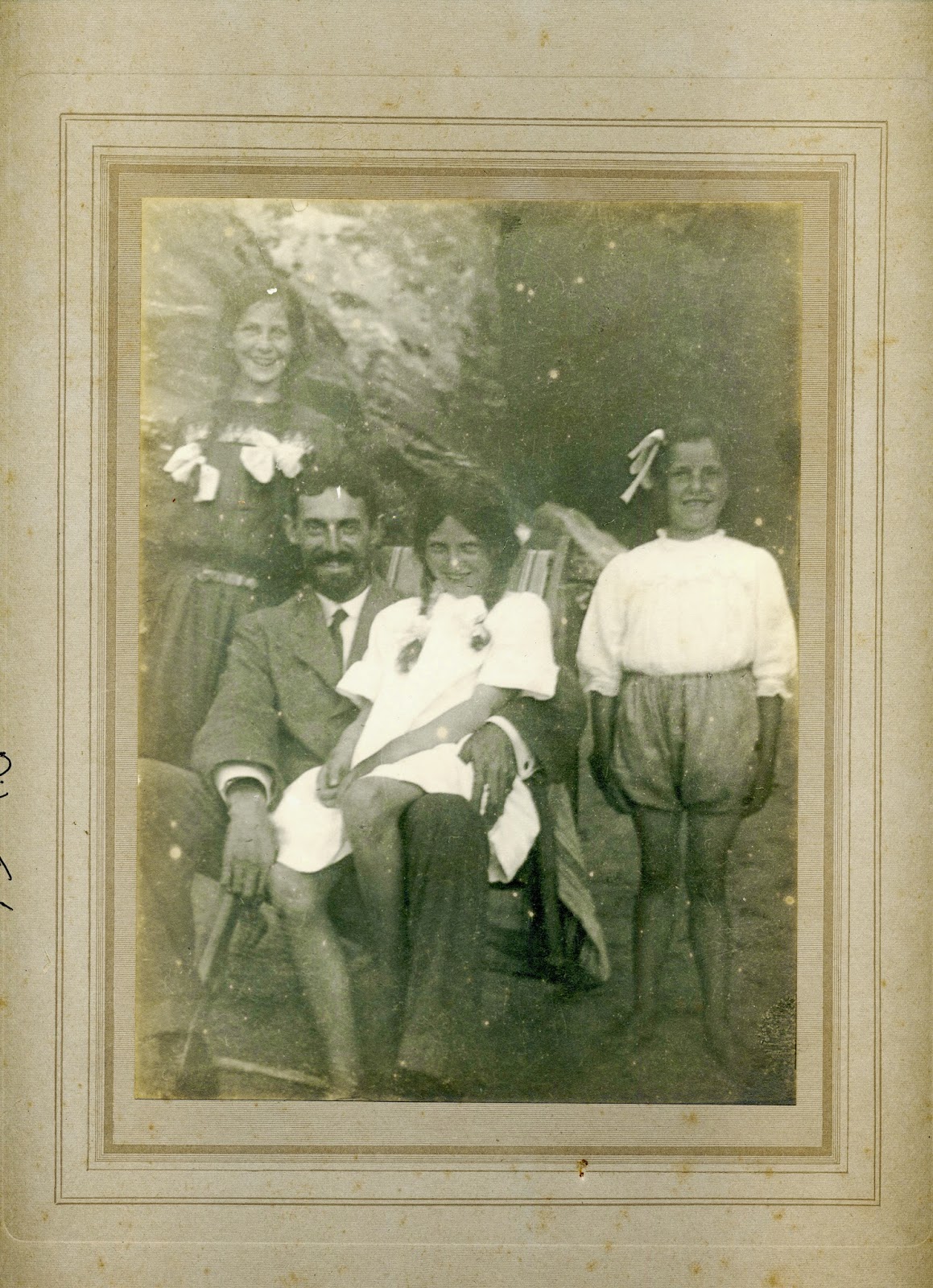 He returned to Truro, where he made himself unpopular, declaring that the Boer War had been created by politicians and was being waged against defenceless women and children (thousands of them died of dysentery in our concentration camps).

My grandmother married Jack Avery in the peace after the Boer War. A tenant farmer’s daughter from Exmoor, she rode horses as she learned to walk, and when Jack took her out to South Africa she rode with him, side saddle, from Cape Town to Swaziland, a thousand miles or more. The railways had been destroyed in the Boer War. There were no roads. Later they returned to Cape Town with their four children in an ox wagon and took ship for their beloved West Country.

In 1914, as soon as war was declared, Jack Avery, this same man who had refused to fight in the Boer War, enlisted in the British army. Meeting his sister (my Great Aunt) coming down May Hill in Truro, he gave her the joyful news. Years later she told me she had been so angry she could barely speak beyond, “Jack how could you? You have a wife and four young children.”
“It’ll all be over by Christmas,” he jauntily replied.
What propaganda made a man of his mindset believe that?

He became the first man from Truro to die. His only son, my uncle John, went unscathed through the Second World War, only to die just before it ended. It was the only time I ever saw my stoic grandmother with tears in her eyes, her hands shaking so much she could not hold the cup of tea my mother made for her. “Everyone I love is taken from me,” she said. I must have been six-years-old and I can still see and hear those moments as if they were happening before me now. My grandmother and mother were typical of their generations. They lost fathers, husbands, brothers,  sons.

I was grateful that you included material based on Vera Brittain’s writings but, with all due respect, Vera Brittain (bless her) was well educated, well off and at that time single and childless. The women in my mother’s and grandmother’s generations were very often fatherless, widowed, poorly educated, poor, and with big families. They were exhorted to ‘keep the home fires burning’. They did so. Who thanked them?”

I agree. I adore my battles and kings and golden treasures, but in the end, my fascination is with local history. I walk along my local canal to see little plaques ith people's memories of when it was a place where they put out lamps so no one fell in and rounded up the cows...I work in an area with an amazing history, with children descended from people involved in it, the Sunshine Harvester decision, a massive piece of industrial relations history. Ordinary people. My great regret is that I missed out on the Little Lonsdale St archaeological dig - you can keep your ancient tombs!

Thank you for this post that speaks for many of us. Both my grandfathers fought and returned but neither was ever the same again physically or mentally. Neither said a word about their experiences especially when I. a typical, tactless child, would beg to hear their their experiences. Nothing but occasional snippets. I wish I had the memory to hold and admire.

Neither did they tell their wives who indeed "kept the home fires burning." We need to be reminded how much the women also struggled to help us achieve a good life. We must never forget them.

So agree with you about the poor, uneducated women left behind. My grandmother's father was killed on the Somme, her mother was unable to survive taking in washing & cooking & was forced to remarry to provide for her many children. She married a widower with children & they went on to have more. My grandmother was eventually the eldest of 13 children & one of her many tasks was to search the markets for cheap & discarded food. Life was very, very tough for those left behind.

Tanya, I so agree. The French historian, Fernand Braudel, was also of the thinking that history was about the those living agrarian lives; rural peoples who were sowing the seeds and feeding nations. He might be called the father of modern history in that he changed the historians' perception. Whether he was focusing on those connected with the Mediterranean or those working the land, he always held that the ordinary man and woman are the makers of history.History is not only about dates, single events. It can be the slow movement of the cycles of nature and the environment or shifts that take place over generations, centuries. Your post here clearly expresses that. A man travels, marries, dies and his widow continues. She might be lonely, stoic, painful but she (or he) keeping stoking the fires for the future. The day to day needs and the kids, the next generation. Their children build lives, marry etc… In this way, the world moves and shifts. I found your post very moving, thank you.

Heart-wringing. Thank you for posting.