A month ago I was in Tuscany, staying near a tiny hill town called Pari.


It chanced that my husband's oldest friend, known since they were both twelve, was staying half an hour's drive away, with his sister, in another small town, by the name of Torri. "Torri" = "towers" though we could see only one. It belonged to the Abbey of Santa Mustiola, first recorded in 1070.

(The Roman Martyrology records under 3rd July: “At Chiusi, in Tuscany, in the reign of the emperor Trajan, the holy martyrs Irenaeus, deacon, and Mustiola, a matron, who were subjected to various atrocious tortures and merited the crown of martyrdom”).

Our friends had discovered that the Cloisters of this Abbey would be open on Monday and Friday mornings at rather approximate times, so off we went on the first available Monday, before our trip to San Gimignano, to see what there was to be seen.


Which actually turned out to be quite a lot. The cloisters date from the 13th or 14th century though they have been restored. The cloister has loggias on three levels, the lowest of which is decorated with black and white marble and supported by columns, some intricately carved.

But its glory is really the sculpted capitals. 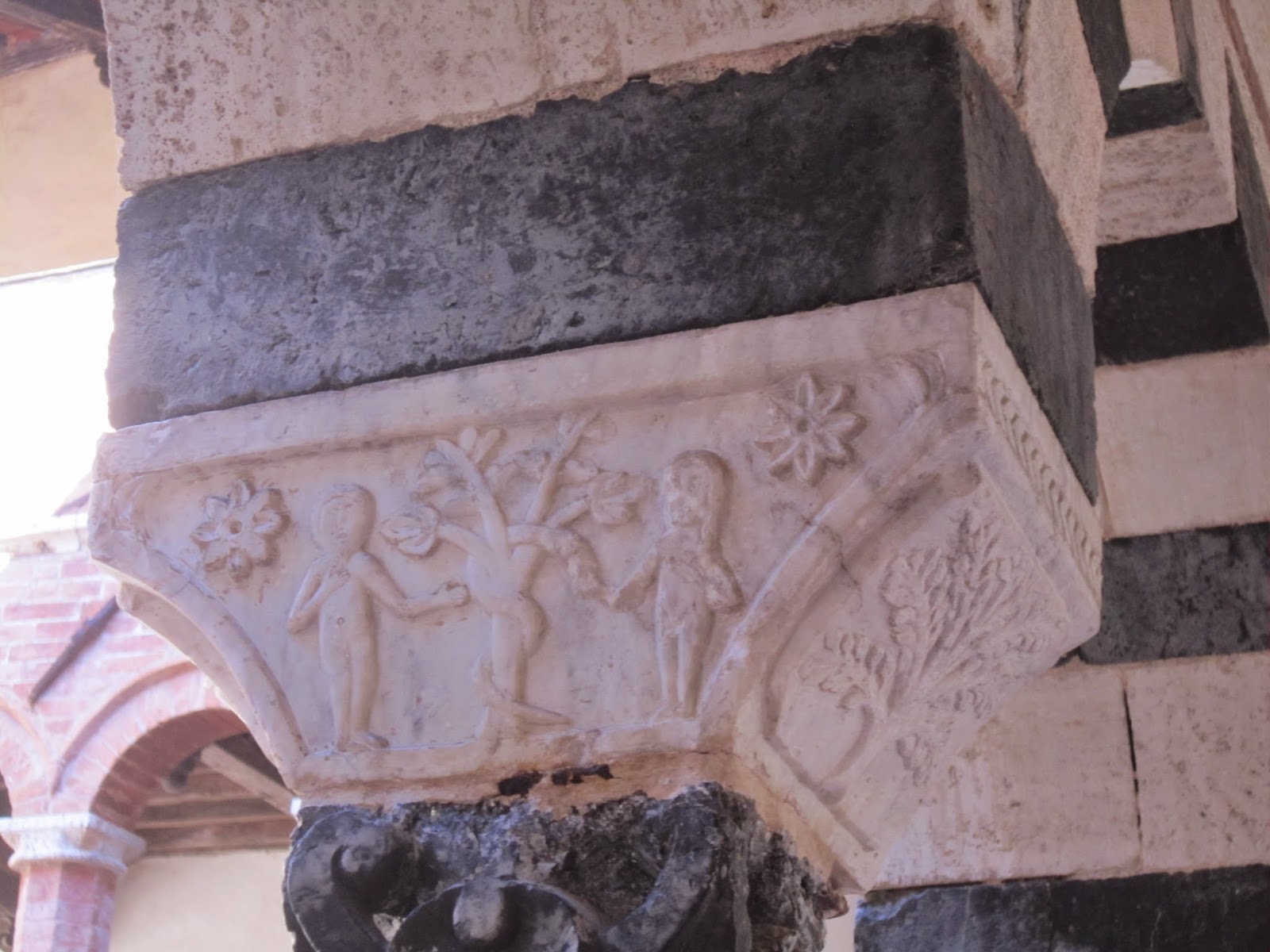 This is a fairly conventional Adam and Eve, being tempted in the Garden of Even. Some others have interlaced abstract designs, which are quite Celtic in flavour.

But others are of animals 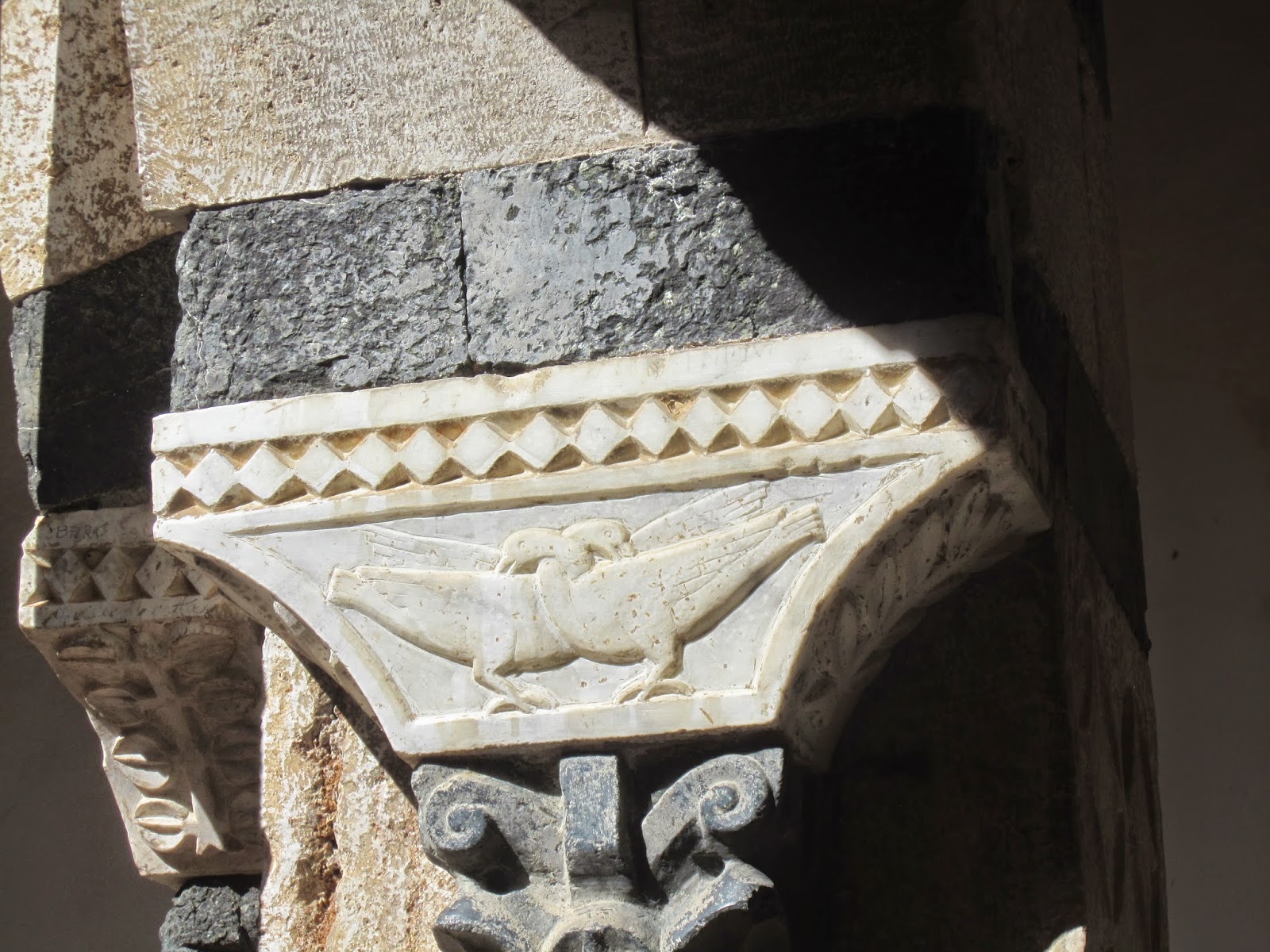 Some, like these two ?geese, ?doves have their necks entwined, providing a symbol of harmony and love. 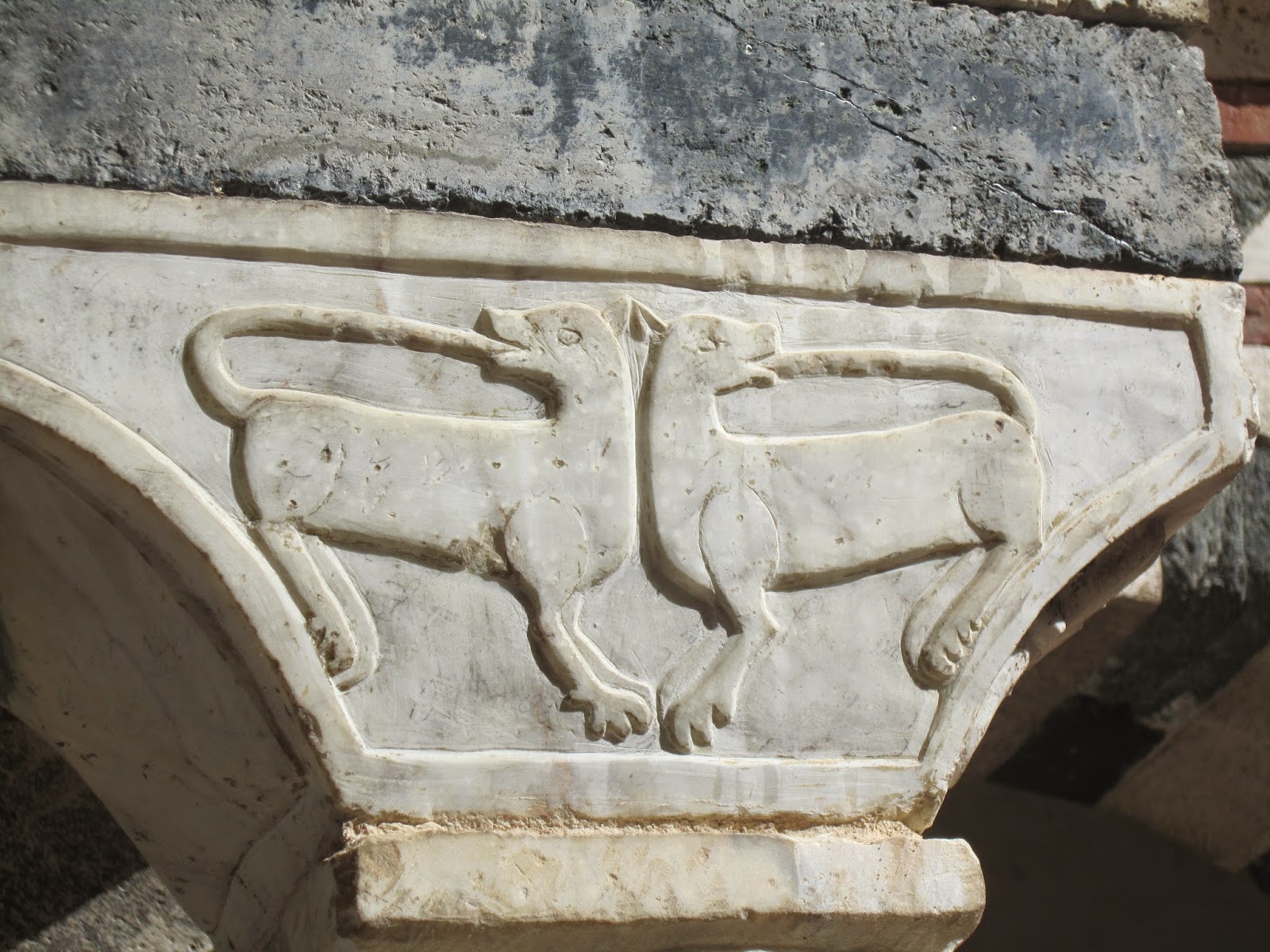 Others, of similarly unclear taxonomy, are more involved with their own anatomy than with the other half of the couple. 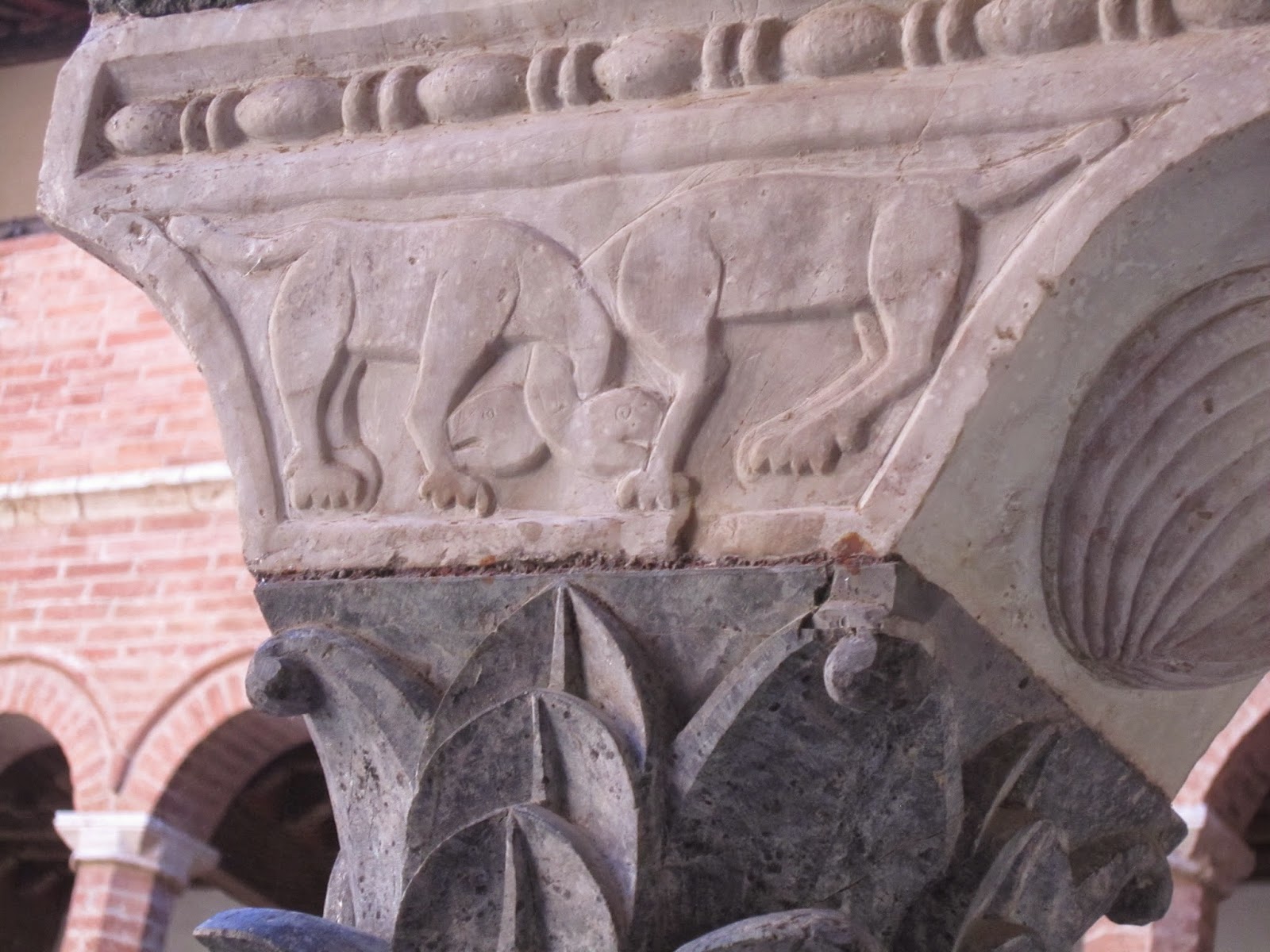 But on the whole there is more entwining than tail-chewing. And none of the biting of others that Michelle Lovric told us about in Venice in few weeks ago.

The second loggia is built of brick, whose pinkness is reflected in the herring-bone pattern of the cloister floor. The third loggia is made with wooden columns. It's a strange development, isn't it? For the quality of materials to diminish, the closer to heaven the eye progresses. It suggests that the valuable marble and rich carvings were intended to impress those who strolled at the lower levels.

Eneo Silvio Piccolomini, whose family crest this is, became Pope in the mid 15th-century. His Papal name was Pius ll and he came from a family that grew to be of immense wealth and power in Siena and its surroundings. many things in that region are named after him - from a full-frescoed library in the Duomo by Pintirrucchio to a long road leading towards the Porta Romana.

And on certain days in Siena, the highly-decorated floor, normally covered, is exposed for vistors to see.

There are ten Sybils altogether, twice as many as Michelangelo painted on the ceiling of the Sistine Chapel. And many other subjects, like a huge Slaughter of the Innocents. 600 years on from this decorative scheme it is hard to put ourselves into the mindset of the first viewers, any more than we can understand the animal iconography of a century or two earlier in Torri.


But it's always worth seeing any art treasure which is not often available to the traveller. Have you found other examples? 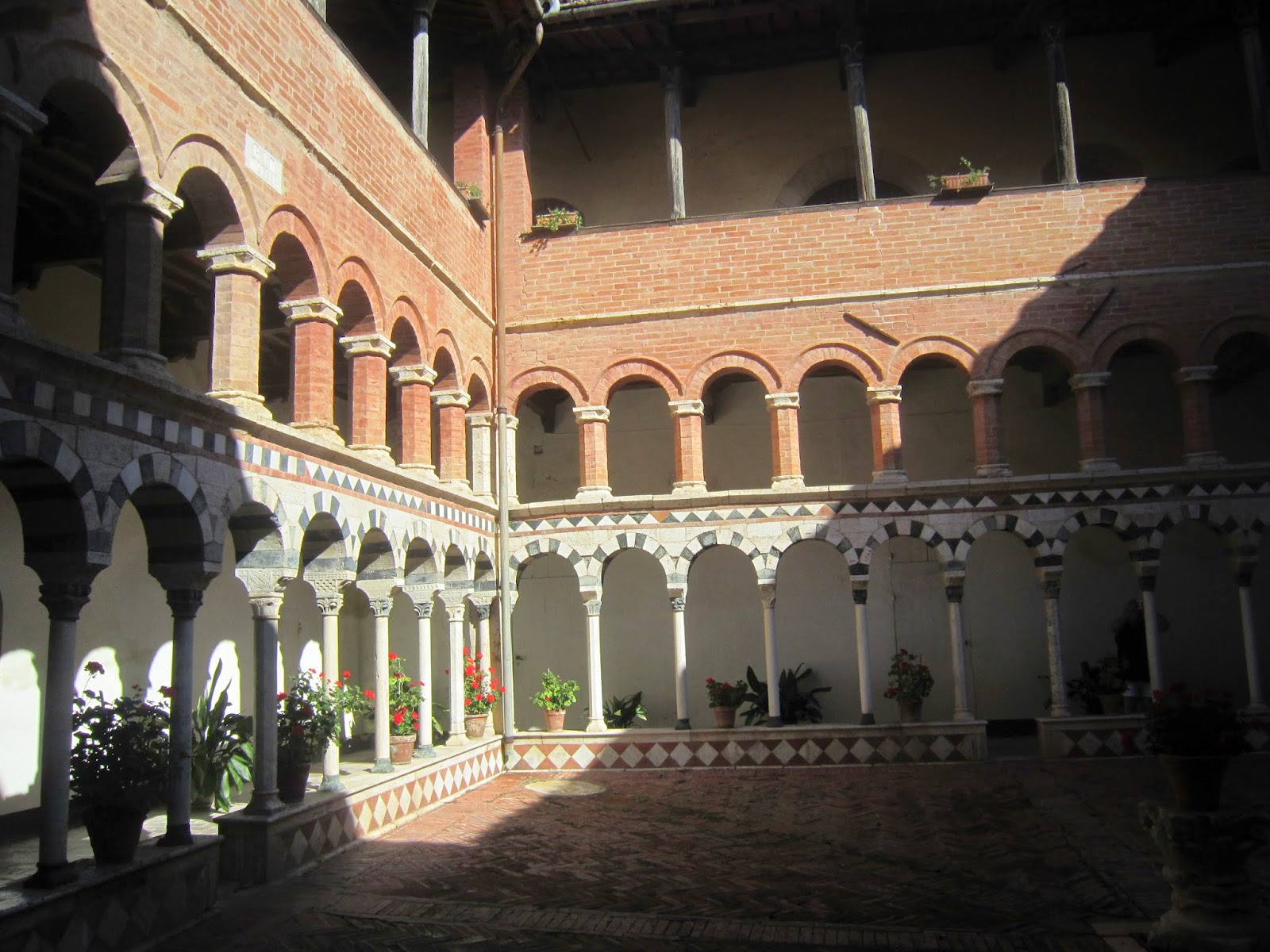 I can't say I've seen much that travellers don't often see, but certainly something that they might not notice when going past. In the Melbourne CBD, in Colljns St, there's what is now known as the ANZ Banking Museum. It's a 19th century Gothic Revival building, with all sorts of sculpture outside, and inside there are arches and columns and a decorated ceiling. It was a bank, then several other things,then a bank again. You can just walk in off the street and take a look around. But a lot of people just don't notice it among the other buildings. I didn't, till my mother said, "Oh, look!" as we went past on the tram one day.

Actually, there are quite a few places of interest in our CBD. The Forum Theatre is a place most people can't get into any more, since it was sold, but it used to be a cinema, with Greek and Roman sculptures, characters from mythology, an elaborate ceiling. Outside it has a Moorish onion dome and fretwork.

Sometimes you don't need to go to Tuscany to see amazing stuff. :-)

Mary, I am fascinated by the dog-like creatures - are they dogs? They look as though they have lions' feet - biting their tails. Do you know anything about this? Any local story that might accompany this? The Italian Greyhound was a favourite with Noblewomen. Curious, the biting of their own anatomy. I would love to visit these beautiful cloisters. Did you spot any evidence of olive farming there?

Sue, of course not! I thought my question implied that? The Banking Museum sounds wonderful.

Carol, there were olive farms all around that part of Tuscany but not in the cloisters, which is in that tiny hill town.

I really have no idea about the ?dogs biting their tails! We took a whippet with us and he didn't seem to know either.

Yes, yes, I know about all the olive farms on the hills, frequently owned by monasteries etc… but I was wondering whether there were any carvings or hidden signs of olive culture within the cloister? Olive leaves, drupes, carved into the marble, that sort of thing...

Talking of banks, there is an absolutely fabulous lobby to a Lloyds branch on The Strand. I passed it by accident when on my way to visit the Temple Church. You can see photos of some of it here. Utterly gorgeous and amazing. https://www.flickr.com/photos/royreed/8618876085/in/photostream/

Thank you! I really enjoyed my armchair rip to Tuscany.