George Orwell and the Civil Wars by Claire Letemendia

Claire Letemendia has just joined us - welcome! From November the regular spot of the 2nd of each month will be taken buy another newcomer, Gillian Polack.
As a new member of The History Girls Reserves, I’ll introduce myself by confessing to two passionate affairs in my life. My obsession with the English Civil War era started when I was about ten, growing up in Oxfordshire surrounded by historical sites related to that turbulent time. I’m still a victim, as I dive into my third novel of a trilogy about the shadowy exploits of Laurence Beaumont, a Royalist spy in the First Civil War. Meanwhile, in my twenties I enjoyed an intense seven year relationship with George Orwell, writing about his political development for my PhD. I believe his true birth as a committed socialist dates from his experience in the Spanish Civil War serving with a radical leftwing militia on the side of the Republican Popular Front against the army of General Franco. As was the Cavaliers’, the Republicans’ was a lost cause; the war ended in their defeat and a long period of authoritarian rule. Orwell went on to describe both the military action and the complex political in-fighting within the Front in what I consider his best non-fiction work, Homage to Catalonia. 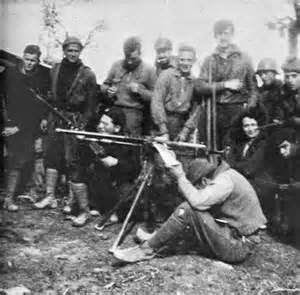 Here’s a photo of Orwell (tallest figure standing, third from the right) taken in March 1937 at the front near Huesca, in Catalonia. The woman in the picture is his wife Eileen, who had come from England to visit him. On the 20th of May that same year, he was shot through the neck by a sniper’s bullet. Had it struck him just a millimetre to the left, he would have been dead and perhaps lost to posterity as an author. His voice remained permanently weakened.

But is there any connection between the man most celebrated for Animal Farm and Nineteen Eighty-Four and the English Civil Wars? Curiously enough, yes. Much earlier in the thirties, after his stint in the East with the Burma Police and his forays into the world of English tramps and Parisian low life, Orwell worked briefly as a private tutor while he was struggling to begin his writing career. Richard Peters, one of the boys he tutored, remembers him saying he would have sided with the Cavaliers during the English Civil War ‘because Roundheads were such depressing people’. Peters saw him as ‘temperamentally… a Cavalier, lacking the fervour and fanaticism of the Puritan.’

Later on, while teaching at a boys’ prep school, Orwell composed a play for his young students to stage about the Battle of Worcester and King Charles II’s timely escape from capture by Cromwell’s forces. Yet again Orwell showed his preference for the Cavaliers, although not much of his future promise as a writer. In letters to friends, he described the play as ‘mucky’ and complained how he had to make all the suits of armour himself. One boy who acted in it must have felt more enthusiastic since he kept a copy, now in the Orwell Archive at University College, London. It does contain some rather cringe-worthy speeches, and concludes:

MESSENGER: Sir! Sir! The king’s escaped! His ship has left the harbour. They fired that shot as they crossed the bar. The soldiers arrived just a minute too late.

SIR JAMES DIGBY: Good people all, this is a joyous time/ When our good king, long in most dangerous plight/ Is safe at sea and bound for friendly France./ We’ll honour it with song, and silver too/ Sir Edward here and I will give you all/ To drink good health unto his majesty./ Long may he flourish, and soon come the day/ When the usurper Cromwell ends his sway;/ Peace, freedom and prosperity shall reign/ When England has her own true king again!/ Come, sir, if you’ve a song, let’s hear it.

Orwell rarely wasted any of his personal experiences, cannibalising them instead for his fiction. The play pops up in his novel, A Clergyman’s Daughter, as does the mind-numbing activity of constructing armour with brown paper and glue. 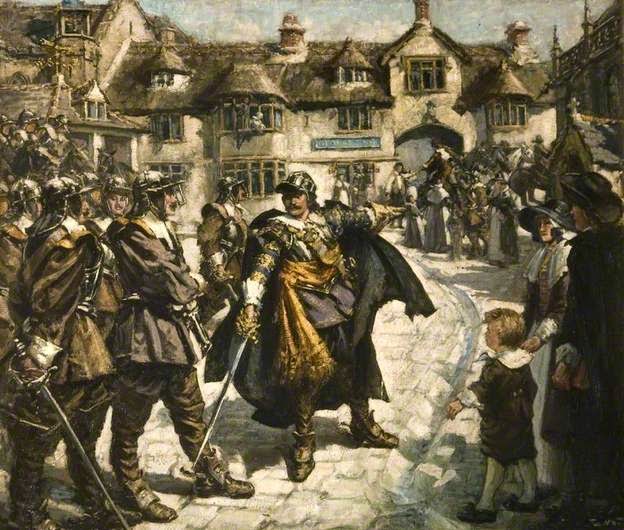 The above scene was painted by Francis Henry Newbery in 1924-7, shortly before Orwell wrote his school play. It depicts the flight of Charles II through the town of Bridport in Dorset, on his way out of England after the battle. Disguised as a servant, he apparently stopped at the George Inn for a quick bite.

Orwell’s interest in the Civil Wars resurfaces in 1940, some five years before Animal Farm appeared. He returned to the subject with a far more mature political perspective in a review of some books for The New Statesman and Nation, a publication that had turned down two of his pieces on Spain, probably because he had castigated the British left, especially the intellectuals, for refusing to criticize the totalitarian aspects of the Stalinist regime and its ruthless suppression of the radical and Anarchist parties during the Spanish war. Of Christopher Hill’s groundbreaking work, The English Revolution, he writes: ‘Obviously a Marxist version of the Civil War must represent it as a struggle between a rising capitalism and an obstructive feudalism, which in fact it was. But men will die for things called capitalism and feudalism, and will die for things called liberty or loyalty, and to ignore one set of motives is as misleading as to ignore others.’ Of another book, he remarks: ‘It is a pity that [the author] fails to make a comparison between the seventeenth century and the one we are now in. A parallel undoubtedly exists, although from the Marxist point of view the latter-day equivalents of the Diggers and the Levellers happen to be unmentionable.’

Clearly Orwell felt a community with the radical egalitarianism and anarchism of those two sects suppressed by Cromwell: at this point he was keenly awaiting a democratic socialist revolution. And he seems to be hinting at a darker parallel: between modern-day capitalists with Royalists; and Marxists or possibly Stalinists with the Puritans. In a separate article, however, he talks of twentieth century war as a quite different animal from previous historical conflicts. Sheer power, of itself and for itself, had become the prize, as Hitler and Stalin had grasped all too well. This, in a nutshell, is his warning message in Animal Farm and Nineteen Eight-Four: not that a truly democratic society will never exist or that human decency will inevitably be crushed, as happens to Winston and Julia, but that such things can occur if we’re not watchful and allow our liberties gradually to slip away.

Reading again the Putney Debates between the Levellers and Cromwell’s faction in the army, I was reminded of the animals suffering under the pig dictatorship in Animal Farm: they had fought so hard to rid themselves of human rule, only to witness their struggle for freedom and equality betrayed. The Levellers had argued that nearly all men should have a vote. In the words of Colonel Thomas Rainsborough:

‘For really I think that the poorest hee that is in England hath a life to live, as the greatest hee; and therefore truly, Sr, I think itt clear, that every Man that is to live under a Government ought first by his own Consent to put himself under that Government; and I do think that the poorest man in England is not at all bound in a strict sense to that Government that he hath not had a voice to put Himself under.’

For Cromwell, these radical ideas threatened not just law and order, but the sacred distinction between property owners and other Englishmen. And so the Levellers’ subsequent attempted revolt was firmly stamped out.

Thank you for this reminder of the Putney Debates. If you're anywhere near Putney, visit St Mary's Church where the debates took place.

Very glad to have caught up with this excellent and fascinating post - I knew nothing about Orwell's allegiances in the English Civil War, which are indeed intriguing. Lovely to have that snippet of the school play, which is wonderfully E.Nesbitty.

Funnily enough, as children, we used to tease my Communist granny (some of whose friends appeared on Orwell's famous post-war 'List' of undesirables) for siding with the Cavaliers, in a 'Wrong but Romantic' kind of way.

Thanks so much for the comments, History Girls - love the Communist granny siding with the Cavaliers! Oddly enough after writing this post, I came across a letter to my mother from our old family G.P., a lovely Scottish gentleman by the name of Dr. Sherry. When he and his wife were on holiday in Scotland during the mid-eighties, they stopped at a remote B&B on the mainland opposite Jura. It happened to be run by a one-legged farmer and his niece. He was none other than Orwell's brother-in-law, married to the late Avril (formerly Blair, of course - Orwell's real name) and he kept not just a lot of books, including Orwell's, but a great collection of artificial legs, many of them broken from kicking cows to attract their attention! I was sorry not to include this - very distant - connection to Orwell in my piece, so am sharing it here...