An artist's haven by Carol Drinkwater 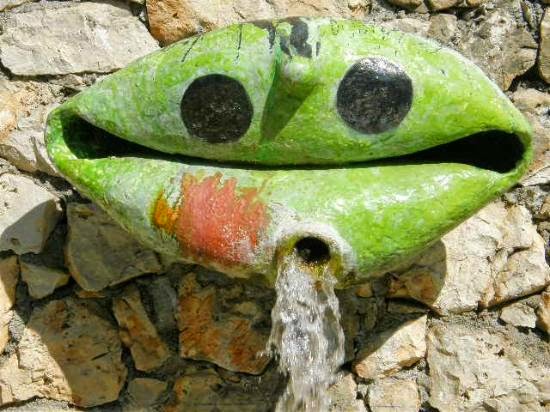 I have been focusing quite a bit on war recently so I thought for this month’s blog I would choose a subject that is closer to home and of a lighter aspect.
A love story. This true story is set along the Côte d’Azur, the Blue Coast, but it began in the north of France in Lille.

In 1908 in the town of Hazebrouck near Lille a boy, Aimé, was born to a railway employee and his wife, Monsieur et Madame Maeght. At the outbreak of WWI, Monsieur Maeght set off for the war never to return. Worse, the family home was destroyed. Aimé, now six years old, along with his mother and three siblings, was evacuated to the Gard in the south by the Red Cross. Aimé was bright and he was passionate about art, poetry and music. After a brilliant school career, he attended art school in Nimes, but he decided he could not pursue his artistic ambitions because he had the responsibility of his family to consider. He turned instead to the printing trade and decided to study lithography. Once he had gained his engraver’s diploma, he had no difficulty finding himself a job with a printer in Cannes. He was twenty-one years old with, it is reported, “spades of charm”. He joined the choir in the church in the Suquet.

Within a year, he had met a local girl, Marguerite Devaye. She was the daughter of wealthy trades people. They married the following year. He was twenty-three. She, nineteen. In 1930, Adrien, their first son was born. Their lives were blessed. Aimé was bursting with ambition and plans. In 1932, whilst still empoyed at the same printer’s, he opened his own shop near to the famous seafront, La Croisette, and christened it Arte. He began exhibiting paintings in the window. Soon, Aimé’s print shop was also a gallery. Pierre Bonnard, who lived in the hillside village of Le Cannet overlooking Cannes, visited the gallery and requested of Aimé that he colour his lithographs.

Bonnard’s request was the turning point in Aimé Maeght’s life. A friendship between them was born. From hereon, the greatest names in modern art frequented Aimé and Marguerite’s lives. 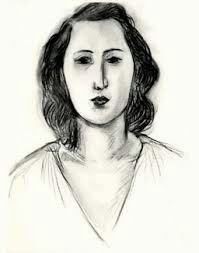 When the war broke out, Aimé discreetly put his printing presses at the services of the Résistance, whose leader, Jean Moulin, opened a gallery in Nice as a cover for the underground work he was doing. In 1943, when Jean Moulin was arrested (he died from wounds inflicted by the Gestapo on a train to Germany), Bonnard begged the Maeghts to move inland. Their second son, Bernard, had been born the year before. They moved to Le Mas des Orangers, a villa outside Vence. Henri Matisse was a near neighbour. Marguerite sat for Matisse for a series of charcoal paintings.

After the Liberation, the Maeghts, encouraged by their celebrated friends, opened a gallery in Paris, the renowned Galerie Maeght. Aimé soon became one of the twentieth century’s most respected art dealers and art publishers. The Maeght lives were blessed, until tragedy struck.

In 1953 their second son, Bernard, died of leukemia. The couple were, understandably, heartbroken. Fernand Leger advised them to take a trip to America. A month after their son’s death Braque visited Aimé. Here is what Aimé wrote of that visit:
‘When Braque came to see me in Saint-Paul a month after the death of my little boy, I was in the depths of despair. He said, “Since you want to do something that goes beyond the business of art dealing, that you seem to despise, and I understand you, do something here, something without a speculative purpose, that would enable us artists to exhibit sculpture and painting in the best possible conditions of light and space. Do it, I will help you.” ’
"Create something that will live on after you…" encouraged Braque.

And the seed was sown...

Whilst in the United States, the couple visited the private art foundations of Guggenheim, Barnes and Phillips and were very impressed. Although still deep in grief they decided, upon their return, to build a property near their home to house their private art collection. At that time, they were not intending it to be open to the public. It was to be a haven for artists, writers, poets; somewhere to congregate and share their ideas. Miró and Braque in their different ways encouraged the Maeght couple to create a space where exhibitions could be held, where young, lesser known artists could also participate. 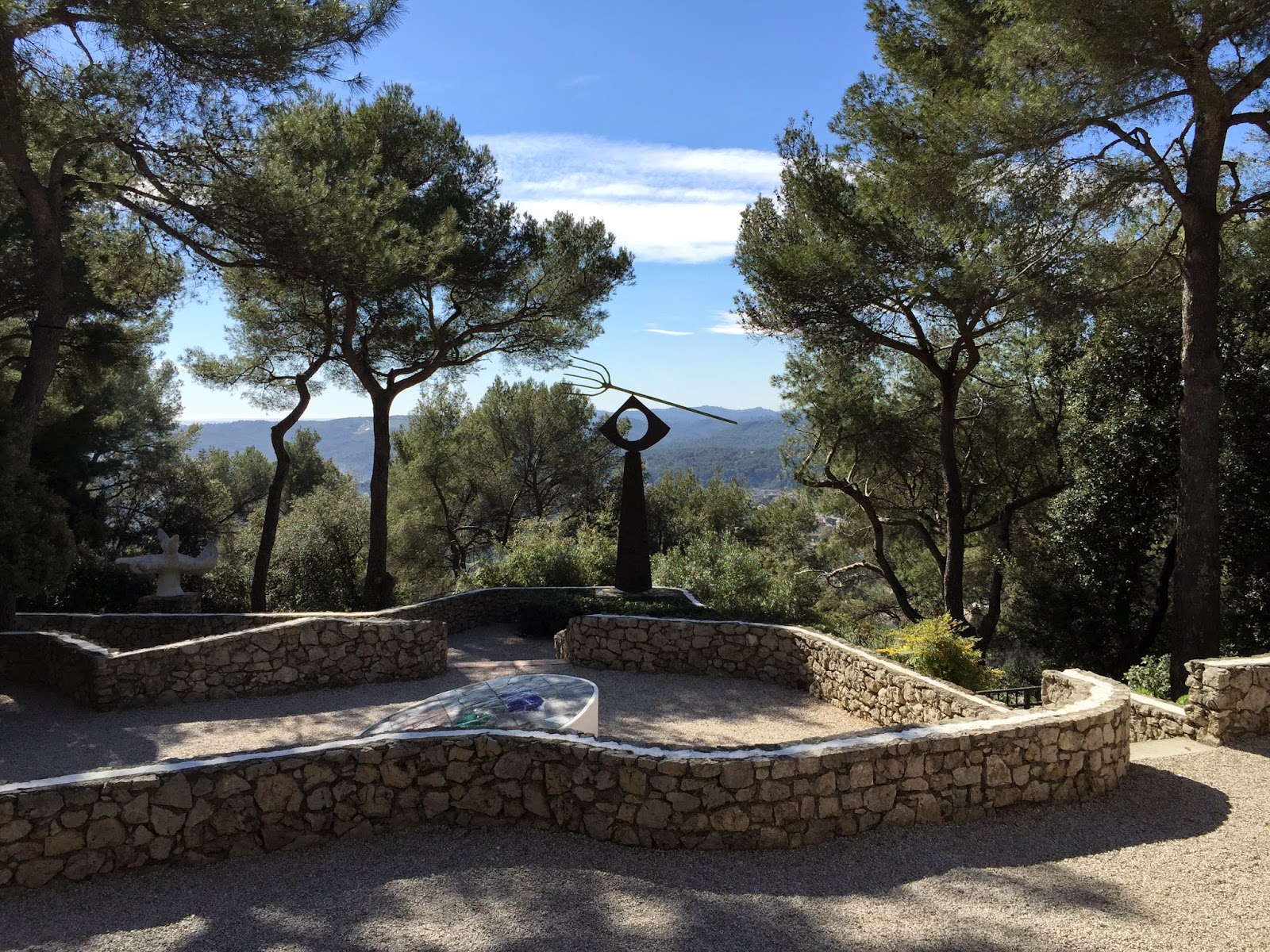 A part of the Joan Miró Labyrinth. The Artwork is
La Fourche, or The Fork and the Devil

A beautiful pine-clad hillside outside the village of Saint-Paul de Vence is the location. The Catalan architect, Josep Lluis Sert, who had just finished designing a studio for Miró in Mallorca, was brought in to assist. However, the local prefecture refused the planning permit. It was only when the Minister of Culture, André Malraux, stepped in that the project was given the green light. Malraux, a writer himself, was a man of passion and vision.

One astounding moment during the preparations for the foundations was the discovery of a ruined chapel on the land. Marguerite saw this a good omen. The Maeght couple restored it and it has been integrated into the labyrinthine structure displaying splendid stained glass windows designed by Braque and Raoul Ubac. It is the Chapel Bernard.

The construction took four years. Artists and workmen picnicked together regularly on the site. Sadly, Braque died the year before completion.

On the 28th July 1964, the Fondation Maeght was inaugurated by André Malraux (also a former member of the French Resistance) who in his opening discourse declared, “this is not a museum”. An accurate observation:  It is indeed an indoor/outdoor structure created by the artists and architects themselves, a Mediterranean playground full of joy and colour. A marriage of art and nature. The inauguration dinner was held in the Giacometti courtyard. Ella Fitzgerald and Yves Montand were the evening's concert. The Maeghts had financed everything themselves. It is their monument to their departed son, Bernard. Today, its director is Adrien Maeght, older brother of long-deceased Bernard.

Earlier this week, while still waiting for editorial input on The Last Domain, I decided to give myself a treat. It is spring here, full-blown. warm and flower-filled. A day out on my own seemed long overdue, so I set off for the Fondation Maeght, situated a ten-minute walk outside the ramparts of the medieval village of Saint-Paul. It is in the final throes of celebrating its fiftieth anniversary last year.
Here follow a small selection of the photographs I took at this serene and magical place. 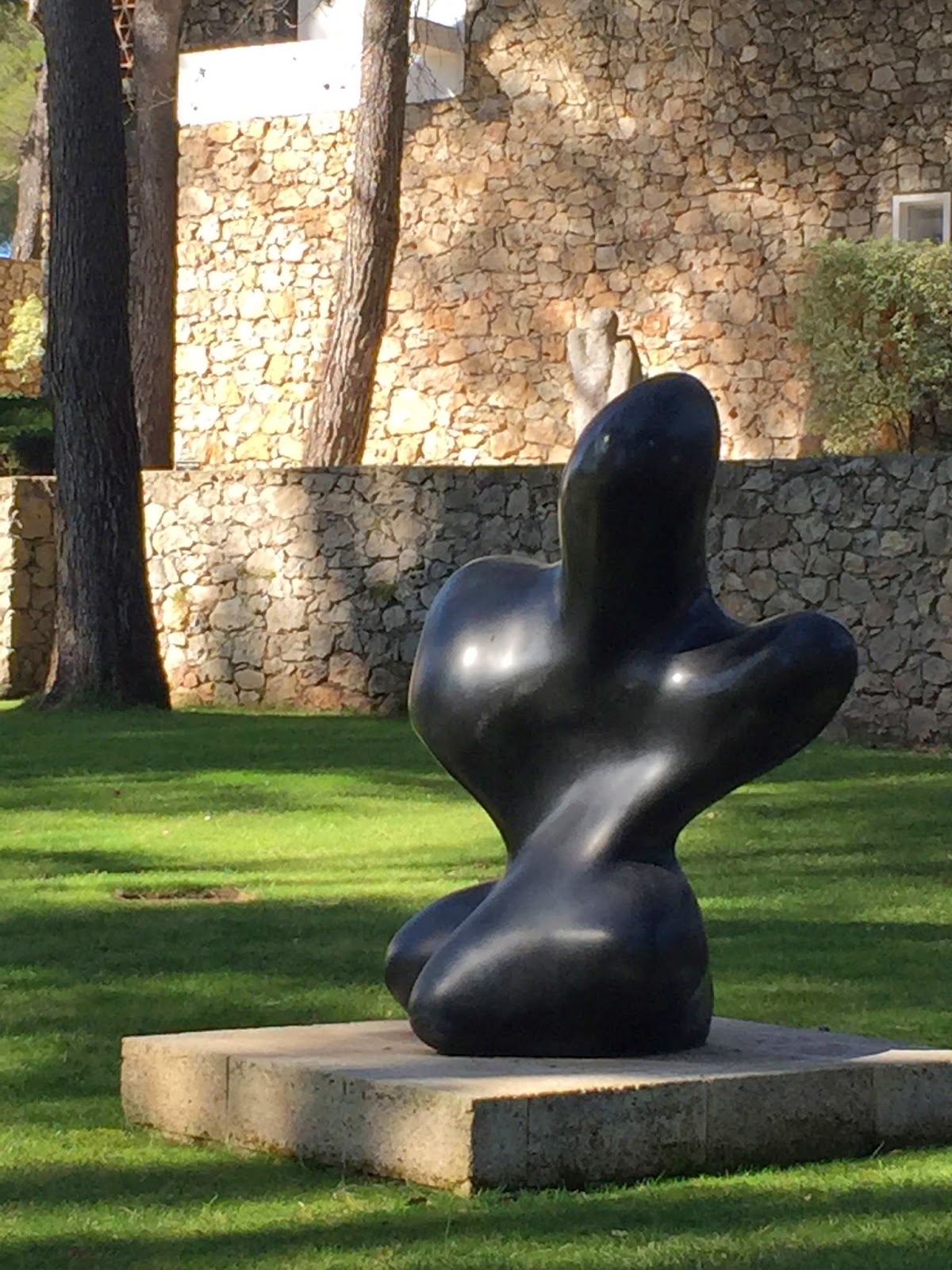 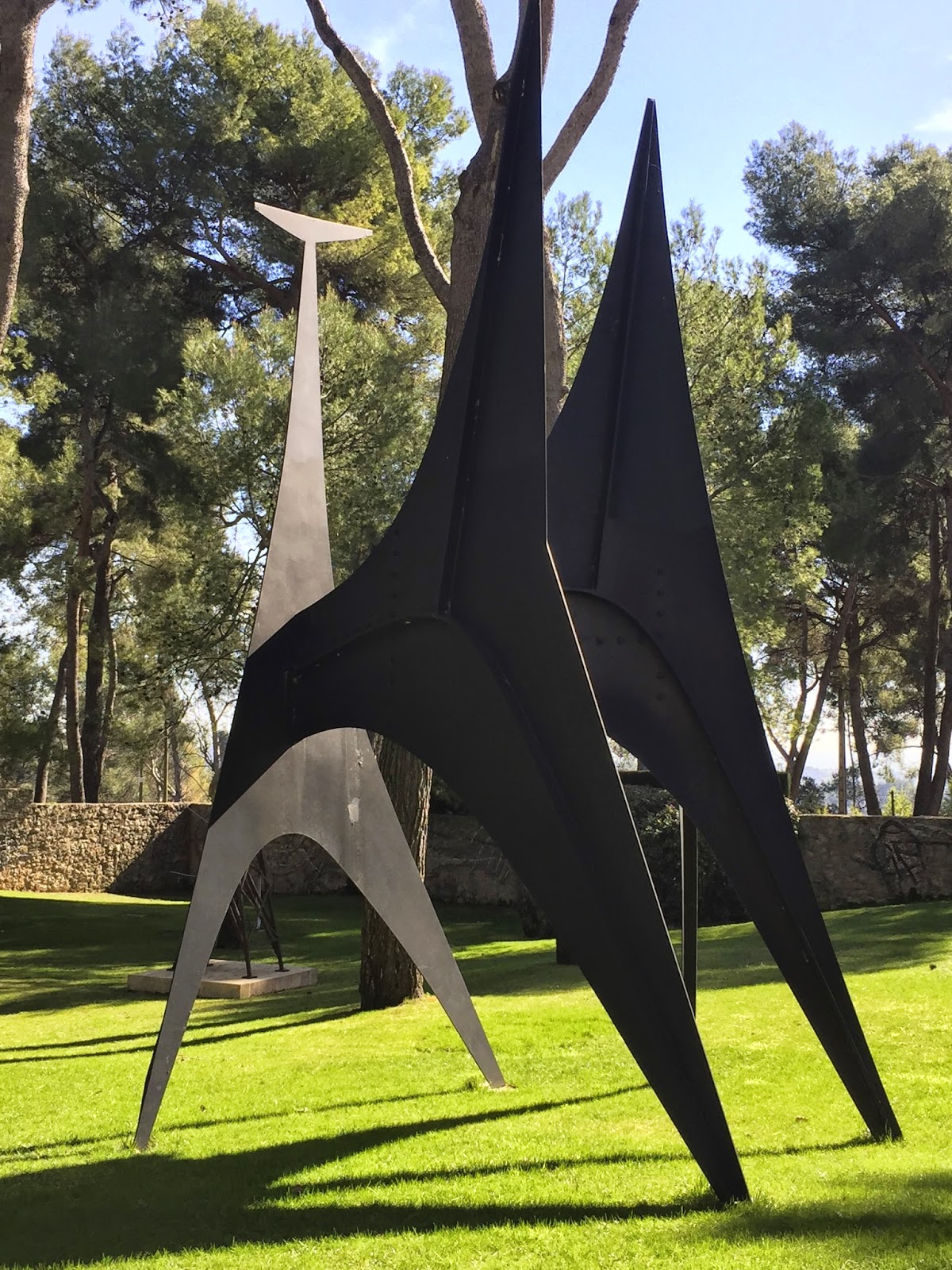 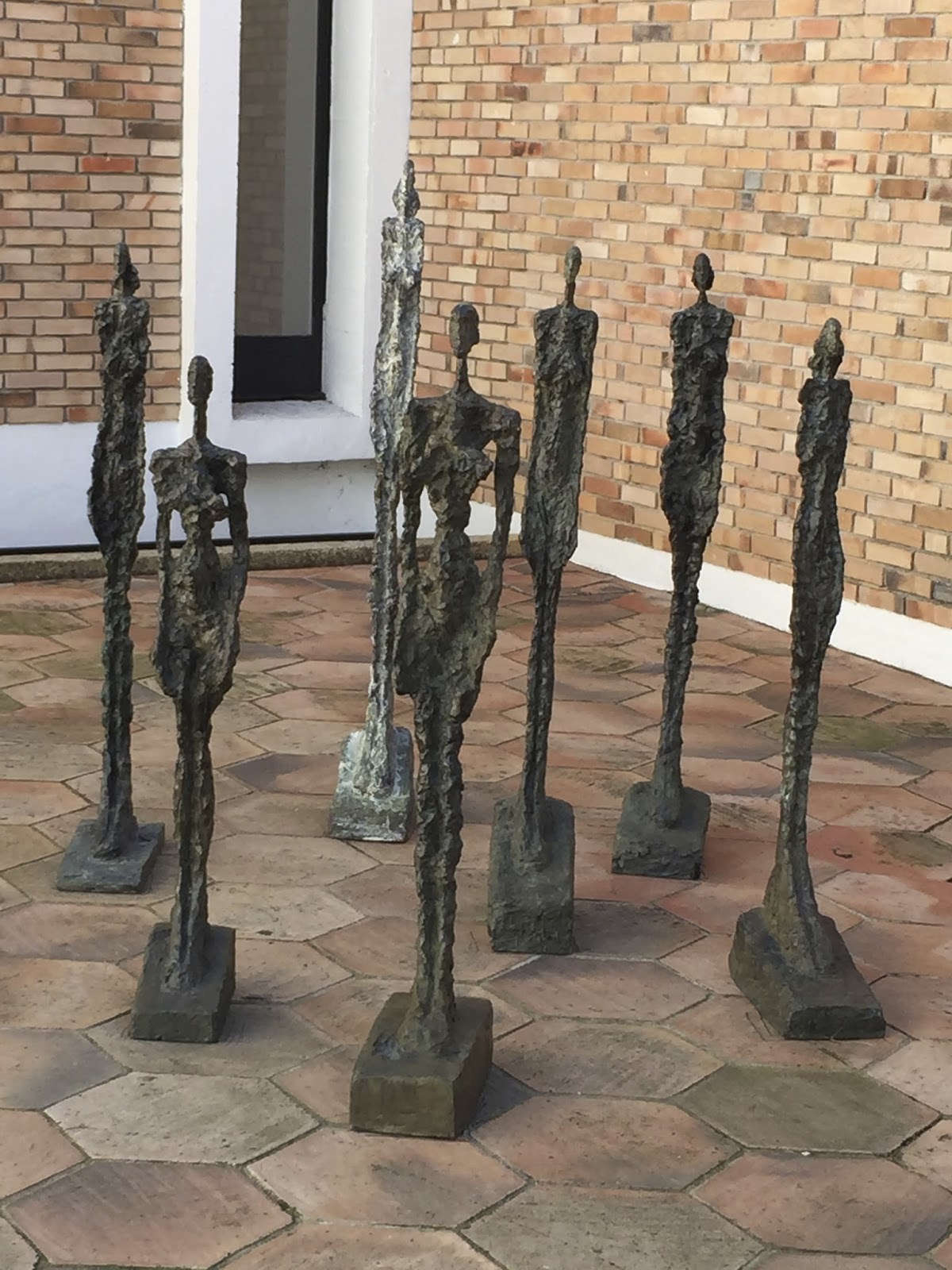 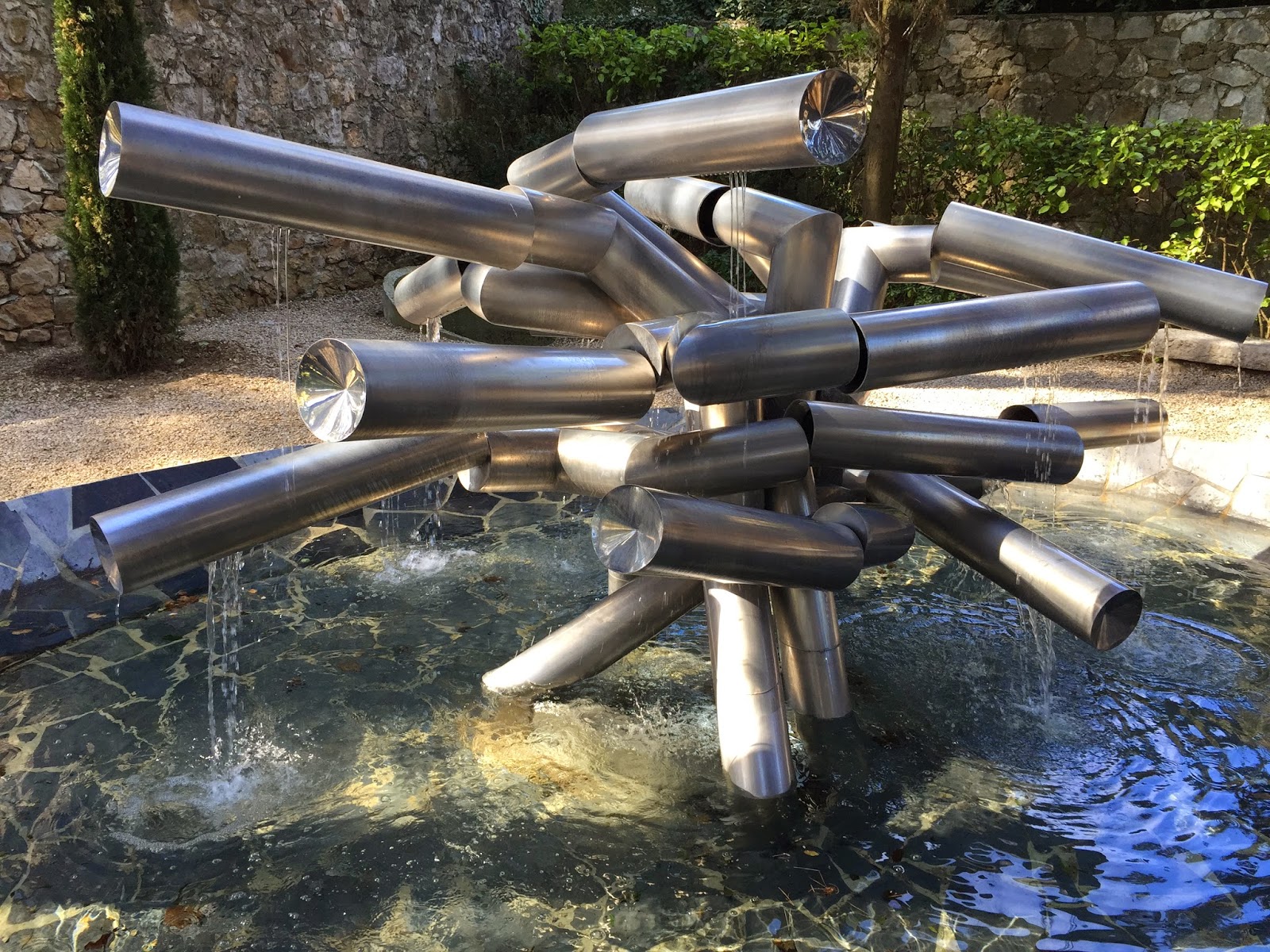 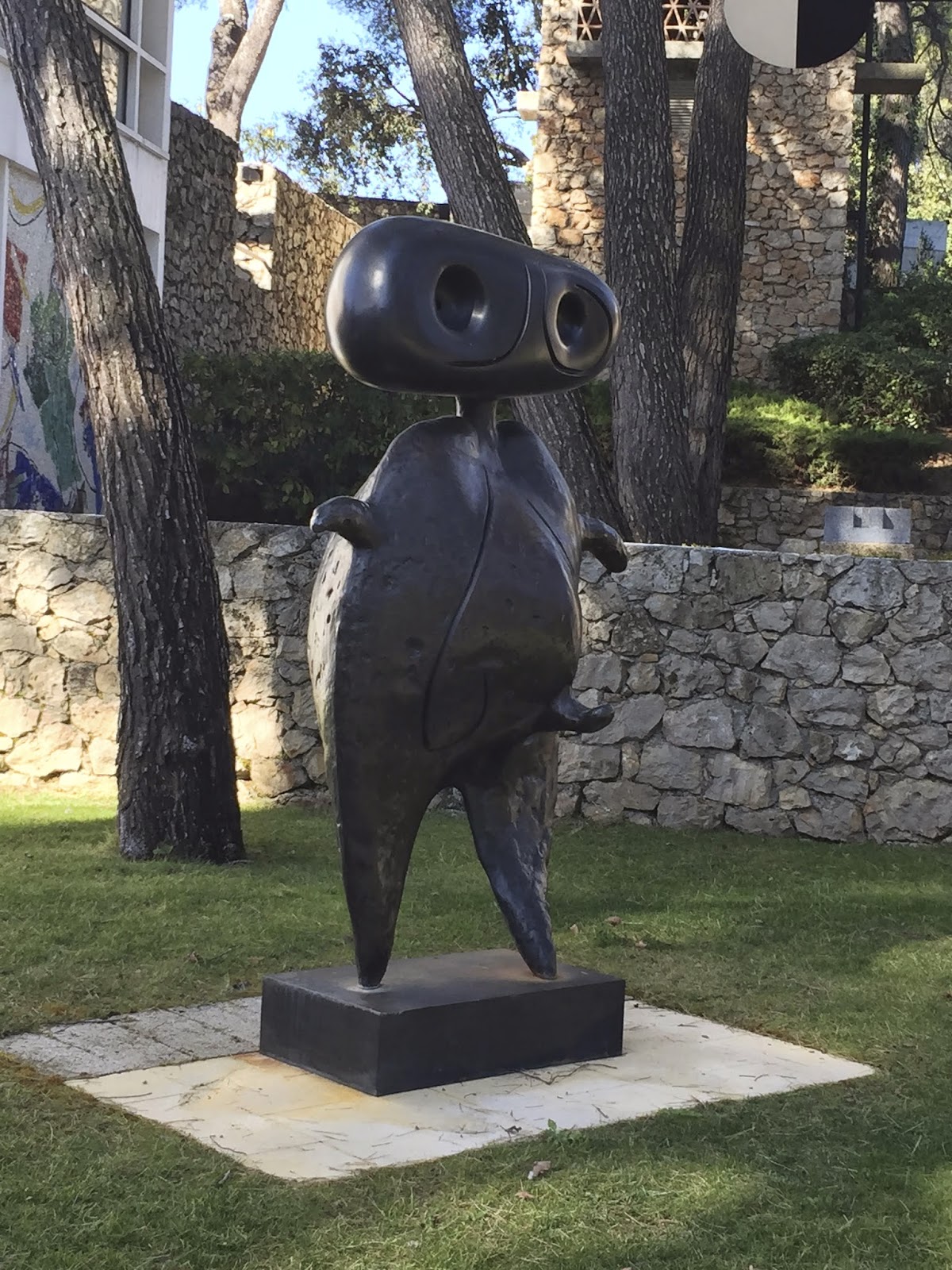 I want to close with an extract from a correspondence sent to Miró from Aimé Maeght:
"Yes, my dear Joan, we will create a unique work in the world that will remain in time and in minds as evidence of our civilization, that through wars, social and scientific upheavals will leave humanity one of the purest spiritual and artistic messages of all time. These are the stories I want to make visible to the generations that follow us and to show our grandchildren that in our very materialistic age the spirit remained present and very effective thanks to men like you."
29th August 1959

Marguerite Maeght died in 1977. Aimé Maeght followed her, his most loyal ally, on 5th September 1981. Both are buried in the cemetery of Saint-Paul de Vence. Chagall lies nearby.
Alongside her octogenarian father, Adrien Maeght, Aimé and Marguerite's granddaughter, Isabelle, presides over the foundation now. It remains a family affair. And, in my opinion, an inspirational love story.

What a wonderful story. I would love to visit this place - right now in fact! last year when we were in france, we visited the Jean Moulin Museum in Bordeaux. What a brave and remarkable man.

By chance, yesterday, as I moved a poetry anthology, a bookmark slipped out: a long-forgotten entrance ticket to the Fondation Maeght! What a coincidence! Carol, thank you for this post which has brought back a host of sunny memories and scenes - as well as your account of a wonderful shared life story.

Someday I will go there - how wonderful!

I have known about the Foundation since I was an art historyI major before architecture. It was on my list last fall on my adventurous trip from Paris to Nice, but sadly I ran out of time, I had a really full schedule of wonderful places of art and architecture to enjoy.

Thank you, Carol - so interesting to learn the story of the people behind the gorgeous Foundation. Spent a day there twenty years ago, and think of it often, a magical place.