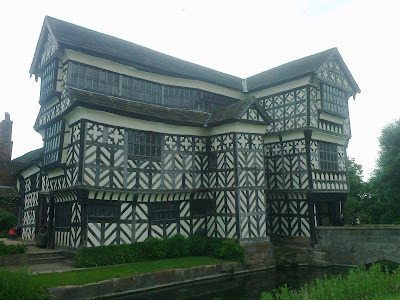 On a trip to the north of England at the beginning of June, we stopped off in Cheshire to visit Little Moreton Hall which as you can see is an utterly gorgeous Tudor manor house not far from Congleton. It sits amid green meadows on a little island surrounded by a moat... 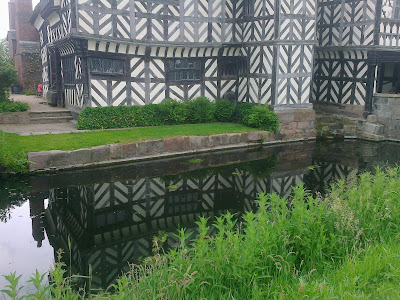 ... and in the moat, swim large, lazy golden fish: Golden Orfe to be precise, which are apparently the very fish the Tudors would have kept there. And indeed eaten, from time to time. 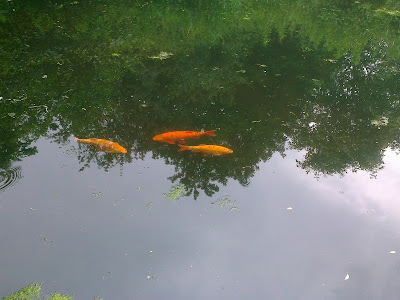 Various old portraits of Little Moreton Hall (can you have portraits of a house?) depict it in very different colours.  It seems that it was the Victorians who went in for the dramatic black and white colour scheme we now associate with Tudor buildings. Originally, the intricate oak timbering of the house would have been left to weather to a natural silver grey, while the plaster-work would have been painted ochre.  For most of its life, then, the Hall would have appeared not black and white, but a softly glowing silver and gold.

The earliest parts of the house were constructed between about 1504 to 1508 in the relatively calm late reign of Henry VII (he died 1509), so the moat was a status symbol rather than intended for defence.  Passing through a gateway, you come to an almost enclosed inner courtyard with ornate doors... 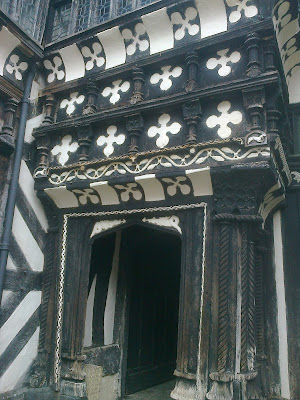 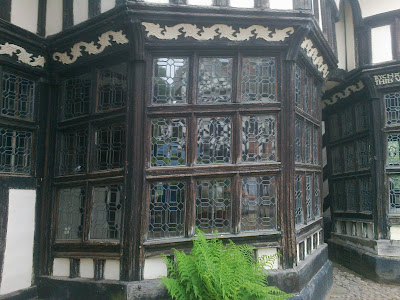 Inside are oak panelled rooms with carvings such as this dragon. Standing under this beam close to the great windows felt rather like being in the cabin of the Dawn Treader. 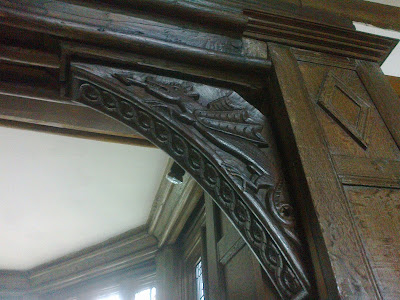 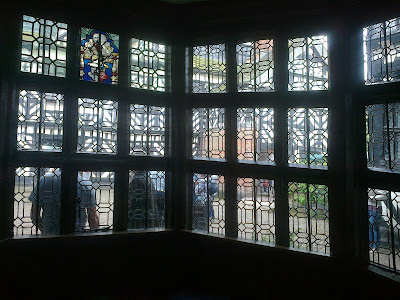 Behind the mid 16th century panelling in the parlour earlier wall paintings were found which in fact mimicked the effect of panelling whilst being much cheaper.  The frieze along the top depicts the story of Susannah and the Elders from the Book of Judges; this was a Protestant house, and apparently this tale was a Protestant favourite. 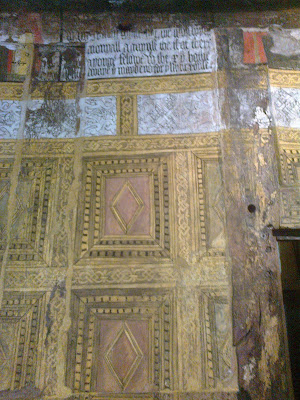 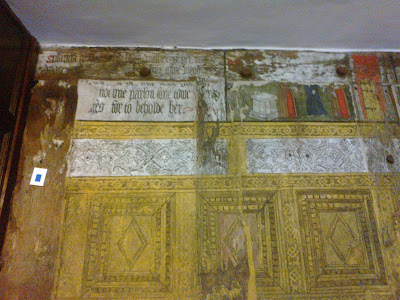 In the big Withdrawing Room with its fine fireplace, the Moreton family's wolf's head crest appears in the windows, while upstairs... 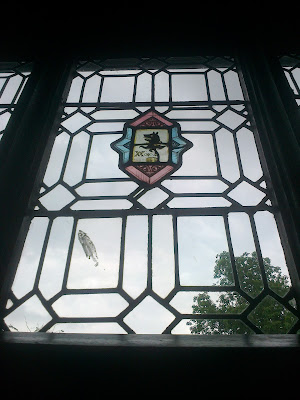 ... a little casement window opens on a garden reminiscent of the Sleeping Beauty. 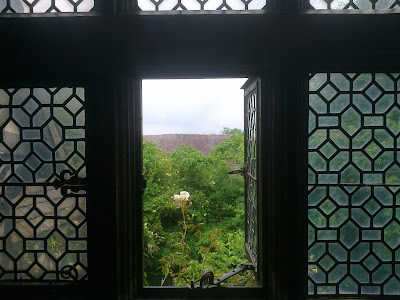 Here is the very same window from the other side! 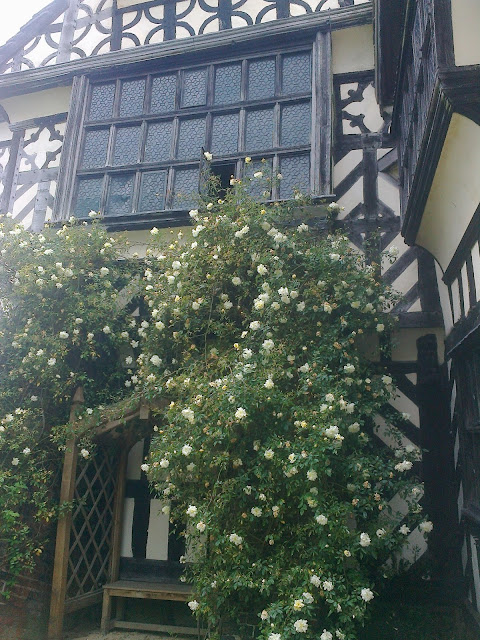 The glory of the house is its Long Gallery, nearly seventy feet long. This was an architectural afterthought and is one of the causes why the house, standing on shallow stone slabs on marshy ground, has gradually warped and twisted under its weight. It's a marvel - the place where ladies and gentlemen took their exercise on wet days, walking up and down or playing tennis - four early tennis balls have been found behind the panelling. 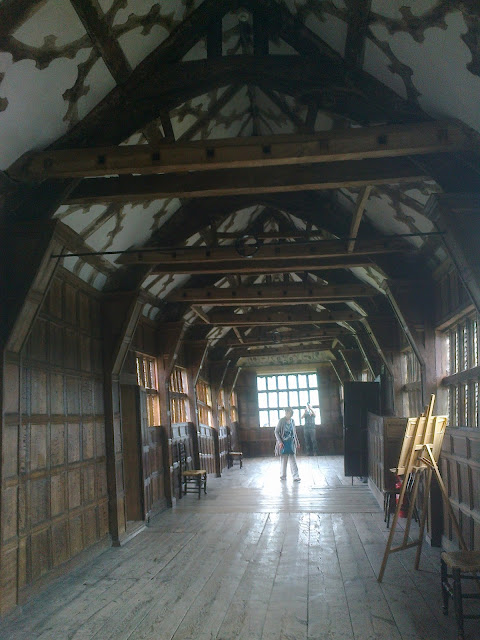 The slightly dizzy, wonky effect isn't the way I held the camera.  It's real: the floor rises and falls and slopes and creaks underfoot like the deck of a ship.  When it was first made, it would have been level.  At either end of the gallery, the gables are decorated with plaster reliefs featuring Destiny and Fortune. Here's Fortune gesturing to her wheel, along with the disapproving comment: 'The Wheel of Fortune, Whose Rule is Ignorance'. 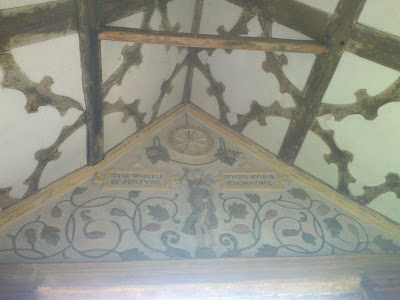 At the other end, we have Destiny wielding a pair of dividers to map out the world, with the approving words: The Speare [sphere] of Destiny, whose Ruler is Knowledge'. 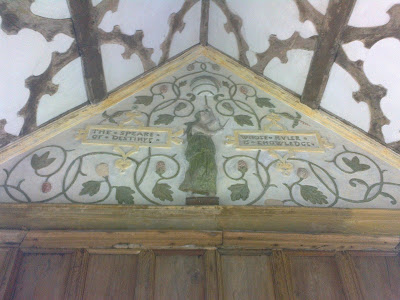 So there you go. Exercise, fun and games, and improving mottoes too. Little Moreton Hall is a delight, and if you find yourselves driving through Cheshire I heartily recommend a visit. It's run by the National Trust, and you can read more about it and its history here: https://en.wikipedia.org/wiki/Little_Moreton_Hall 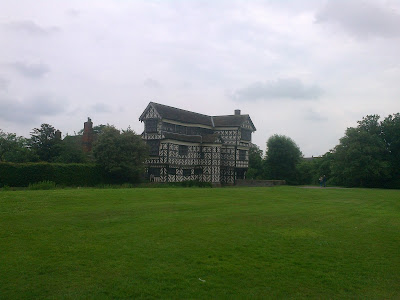 I like the idea of a portrait of a house very much! Will definitely make an effort to visit if ever anywhere near. Thank you!

Amazingly well kept! Does anyone live there or is it all museum?

When my grandma was young, she went to a school called Great Moreton Hall, and on Sundays the prefects were allowed to walk across the fields to Little Moreton Hall and take afternoon tea there. It's always been a special place for her for that reason to this day!

It's a wonderful place,isn't it? So well preserved, despite the wonky floorboards! We've been a few times and there always seems something new to discover.