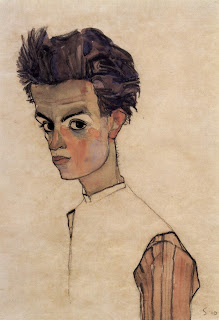 With all that's happened in the interim, it seems like ages ago now; but in fact it's just a few weeks since I was gazing at this painting in the Leopold Museum in Vienna. It's a self-portrait of Egon Schiele, painted in 1910 when he was just twenty years old. His style is utterly distinctive; before visiting the museum I was only really familiar with one of his pictures - this one on the right - but I would have known instantly that this was by the same artist. You can sense the barely controlled energy with which his pen moves over the paper, creating a strong, continuous, but slightly jerky line. The eyes are large, brooding and intense: the eyebrows strongly marked, the hair thick and tousled, the expression serious and uncompromising.

Schiele was born in 1890 in Tulln in Lower Austria. His father, a station master, died when Egon was 14, and an uncle thereafter helped his mother with the boy's education. An art teacher at his grammar school quickly recognised the boy's talent, and at 16, he passed the exam to study at the Academy of Fine Arts in Vienna; his uncle agreed to support him.

But Egon couldn't make things easy for himself or for other people. To the bewilderment of his family he rebelled against his conservative teachers, and was determined that he must go his own way. Fortunately at this point he met Gustav Klimt, a successful artist and a generous man, who immediately recognised Schiele's talent and took him under his wing, encouraging him and introducing him to important people in the art world.

However, in 1911 he grew restive and left Vienna to go to Krumau, his mother's birthplace. With him went his model, muse and lover, Wally Neuzil. His painting went well, but he was too much for Krumau. The townspeople were bewildered - perhaps understandably - by his erotic paintings of young girls. He and Wally moved to Neulengbach, a small town near Vienna, but something similar happened again: only this time, it was worse - he was accused of abusing a young girl and was imprisoned. The charge was thrown out, but he was convicted of making indecent drawings and - having already served 29 days, was sentenced to three days in prison. Wally was faithful and supportive, bringing him food and art materials. It was a harrowing experience, and for a time he withdrew into himself.

But his work was becoming known and being exhibited both in Austria and abroad, and in 1912 he moved to a new studio in Vienna. He was still with Wally: let's take a moment to meet her. Here she is, with her red hair, slim face, large, brilliantly blue eyes and penetrating, quizzical gaze. 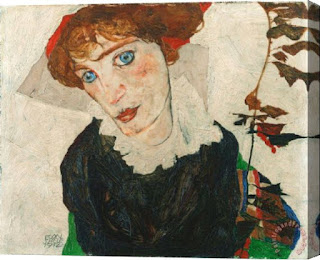 Across the road from the studio lived a locksmith with his wife and two daughters. Wally became friendly with the girls and in 1914 introduced them to Egon - who decided it was time to embrace respectability and marry. He settled on Edith, and married her a year later. He wanted Wally to agree to take a holiday with him once a year, but she - hurrah! - refused. They never saw each other again.

Wally trained as a nurse, but sadly caught scarlet fever and died in 1917 while working in Dalmatia. Egon was called up, but was not sent to the front: he was posted to a POW camp, where he continued to draw and paint. In March 1918 he took part in a very successful exhibition in Vienna: all seemed set fair.

But then, in October of that year, he, Edith, and their unborn baby were caught up in the Spanish flu epidemic which scoured Europe after the war; Edith died first, followed three days later by Egon. He was 28.

I wonder what he was like? To me he sounds selfish, intense and driven; but did he have charm? His mentor Klimt certainly did - more of him another time, perhaps: but Schiele? Maybe not so much. But he clearly had an immense, burning talent: he produced so much utterly individual, beautiful and powerful work in such a short space of time.

But a life isn't to be valued just in terms of the work it produces. Little is known of Edith, but Wally seems to me a fascinating character, loyal, tough and resourceful. Here were three young lives, all of them cut tragically short: how could you measure the relative worth of each? That would be a nonsense - yet had it not been for Schiele's art, we wouldn't know anything about any of them.
Posted by Sue Purkiss at 02:00

A story waiting to be written ...

He certainly was a brilliant artist.

Great post! I've been familiar with these paintings for a long time as one of my brothers, as a teenager, had a passion for the German painting of this period. I always thought Schiele sounded like a little %$*^ - but there's no rule that says a little %$*^ can't produce brilliant, powerful paintings. In fact, total selfishness probably frees you up to concentrate on your art since you have faithful Wallis to do all the routine work.
I look forward to your post on Klimt.

What an intense face he had! I'd never seen this self portrait although I've seen other examples of his compelling painting. The fate of a muse is often bitter so one can't help but feel sorry for blue-eyed Wally, though maybe by then she had had enough. I fear Susan Price's comments may be all too accurate.