A Postcard from Prague by Katherine Webb

This close to Christmas, and newly returned from a short break to Prague for Christmas markets and beer, I had, of course, intended to write a post about King Vaclav the Good, aka Good King Wenceslaus, the real life figure and later saint who inspired the famous Christmas carol. Vaclav was a C10th century duke of Bohemia, the area now encompassed by the Czech Republic; whose remains are interred in Prague's St Vitus's Cathedral. 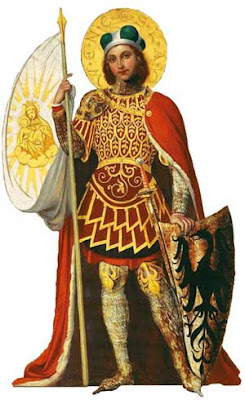 Vaclav was born in 907AD, and came to power as young man of only around 20 years old. A devout Catholic, Vaclav's pagan mother and Christian grandmother fought it out behind the scenes, embodying the struggle for the hearts and minds of the Bohemian people that was raging at the time. Known during his lifetime as a fair and charitable ruler, who founded many churches and monasteries, kept Bohemia free from foreign powers and did a great deal to firmly establish the Christian faith in Bohemia, Vaclav the Good was murdered in 935 by his brother Boleslav the Bad, who then seized power. So, it goes: philanthropy, Good; fratricide, Bad. Clear?

An interesting figure, and just as interesting is the way his legend spread, his sainthood was bestowed and he was posthumously re-titled as a king. A Czech legend that a sleeping army lies beneath Mount Blanik and will awake, to be led by Vaclav, to defend Bohemia in its hour of direst need, bears obvious strong similarities to the English legend of King Arthur.


But whilst I was there, I found out about something even more interesting than Saint Vaclav: Prague's Old-New Synagogue; one of the oldest surviving synagogues in Europe. What a fascinating, atmospheric building. Originally called the New Shul (synagogue), it became known as the 'old-new' when others were founded in the city. It was built in the latter years of the C13th, around 1270, and remains the most important synagogue for Prague's Jewish community today.

The synagogue survived various pogroms and fires throughout Prague's history. Its walls are thick; and, sadly, many of its legends reflect a history of persecution. For example, the attic is said the house the remains of a golem (an animated clay man) created and brought to life in the C16th by the famous Rabbi Loew (Judah ben Bezalel, to give him his full name), to protect the Jewish people. Another legend has it that the synagogue was protected from the several fires that swept through the ghetto by the wings of angels, manifested as doves.


Close to the Old-New Synagogue is Prague's Jewish cemetery, another deeply affecting place. The Jewish community was granted so little space within the city that burials had to take place on top of burials, in a crowded jumble. The level of the ground was eventually built up, so that, in some places, people could be interred ten storeys deep. This must have been so hard to cope with for a community for whom the dignity and purity of the burial ritual is so important. 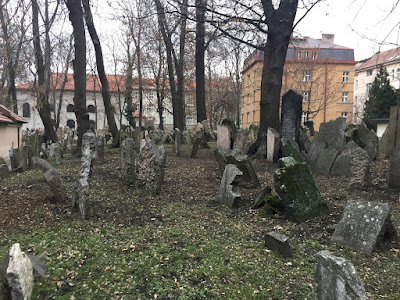 The history of Prague's Jewish community, like that of so many in other areas, takes a deeply tragic turn in the C20th. Transported to an internment camp outside of Prague, at Terezín, many tens of thousands of Czechoslovakian Jews died during the Nazi occupation in World War II; either by being executed or from the hardships they endured. Over 150,000 other people were held at Terezín for years before being transported to death camps in occupied Poland.

Prague's second-oldest surviving synagogue, the C16th Pinkas Synagogue, now houses a museum. The names of around 78,000 Jews killed by the Nazis are inscribed inside the walls in commemoration, and there is also a deeply moving collection of drawings made by Jewish children being held at Terezín. Most of the children's names are followed by three dates: Date of birth, date of internment, date of death.

Though I was only in Prague for two days, and the primary purpose of the visit was to explore the Christmas markets, eat the street food (I am now worryingly addicted to sausages and pickled cabbage) and drink the mulled cider, it is a place of such visible and fascinating history, it can't fail to make an impression. And it certainly does Christmas in style!

I wish all the History Girls, and our readers a peaceful, very happy Christmas, and a wonderful 2017.
Posted by Katherine at 00:30

What a lot you packed into your two days, Katherine. Thanks for your Christmas Greetings and for this fascinating post. I've been to Prague but didn't get to the Jewish Cemetery - I'll definitely be going there the next time I visit the city.

Thank you, Celia! It's definitely well worth a visit next time you're there.

Interesting post. Prague's been on my own wish list for too long, Katherine, so your descriptions certainly started that idea bubbling again for 2017.

This brought back memories of my visit to Prague - thank you! The Jewish quarter is a very moving place to visit - as is the cellar where the men who assassinated Heydrich were finally trapped and shot. So much beauty, so much d=sadness.