This is a post about the minutiae of historical research and how you can't take anything on trust. 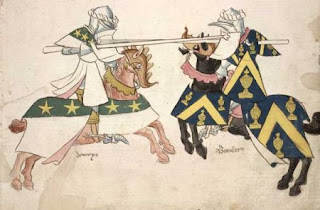 One of the things we think we know is that Henry the Eighth had a very bad jousting accident on January 24th 1536. He lost consciousness for two hours and the news of his injury and possible imminent death, conveyed to his queen, Anne Boleyn none too gently by the Duke of Norfolk, caused her to miscarry a male child of 15 weeks.

From then on, his ulcerated legs, his weight gain and his irascible mood swings led to the executions of Anne and of wife number five, Catherine Howard and his divorce (or annulment) from wife number four, Anne of Cleves, the execution of his right hand man Thomas Cromwell etc. etc.

Here is a Documentary from 2014 called Inside the Body of Henry Vlll, which attempts to find out what his medical conditions and injuries might have been. The jousting episode is about 25 minutes in. Note the images of two heavily armed men hurtled towards each other with lances levelled.

Yes, we all know what a Tudor joust looked like - or think we do.

But there is no evidence that this is what happened. The only contemporary record of this accident is found in two letters.

One, from Katherine of Aragon's physician Doctor Ortiz to the Empress Isabella, wife of Holy Roman Emperor Charles V, spent most of its length on how the late queen, who died on 9th January, comported herself in the face of death. But at the end he adds:

"The French King says that King of England had fallen from his horse and been for two hours without speaking. "La Ana" was so upset that she miscarried of a son. This is news to thank God for."
(Calendar of Letters & Papers Foreign & Domestic Henry Vlll 1887, Vol X no. 427)

Ortiz' source was "a letter from the ambassador in France, dated 15 Feb."

The other source is from Eustace Chapuys, the Imperial ambassador, to his employer Charles V:

"On the same day that the Queen was buried this King's concubine miscarried of a child, who had the appearance of a male about three months and a half old, at which miscarriage the King has certainly shown great disappointment and sorrow. The concubine herself has since attempted to throw all the blame on the duke of Norfolk, whom she hates, pretending that her mishap was entirely owing to the shock she received when, six days before, he (the Duke) came to announce to her the King's fall from his horse. But the King knows very well that it was not that, for his accident was announced to her in a manner not to create alarm; besides which, when she heard of it, she seemed quite indifferent to it...."
(Calendar of Letters, Despatches and State Papers Spanish vol 5ii Henry Vlll 1536-1538, 1888)

Even after the passage of nearly five hundred years, the partisanship is vivid. The divorced Katherine is "the queen"; the new Queen Anne is "the concubine" or "La Ana." Her loss of a child is something to give thanks to God for.

But on the accident, that's it. No opponent mentioned, no confirmation that Henry was actually jousting. 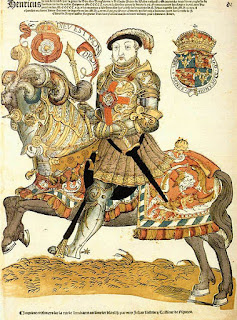 I was writing my latest YA novel, The Ravenmaster's Boy (forthcoming April 2017, The Greystones Press) when I wrote the scene and it was as normally imagined: two armed men thundering towards each other, lances in hand, the clash of bodies, armour, horses. It's dramatic, especially since it's followed by the grim-faced Duke of Norfolk brutally telling the pregnant queen how close to death her husband is. 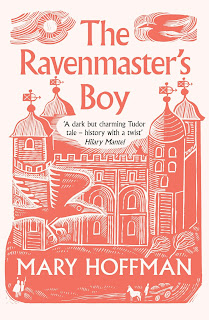 In Hilary Mantel's Bring up the Bodies, the accident is described thus:
"Rafe says 'the contests had not begun, he was running at the ring, the point of his lance scooped the eye of the circle. Then the horse stumbled under him, man and rider down, horse rolling with a scream and Henry beneath it."

I had read that book twice and yet  the old images were stronger. Maybe I was thinking of the play, also seen twice. Mike Poulton's excellent playscript has the accident happen offstage, after we have seen Henry arming for a joust. Rafe Sadler announces to Cromwell, "It's the King ... King Henry is dead.

At Cromwell's reaction ("Ah.") the curtain falls for the interval and our imagination does the rest. 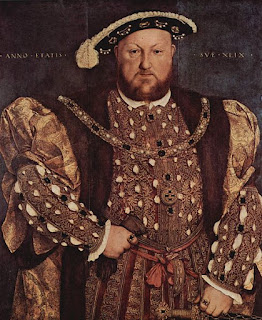 I've changed the scene in The Ravenmaster's Boy. Once I'd been back and checked those original letters, I saw it as indifensible  to have the King unhorsed by an opponent. Who would that opponent have been, after all? Just because we know Henry sustained an earlier jousting injury in a bout with Charles Brandon, Duke of Suffolk, in 1524, that's not enough justification to put Brandon back in the lists.

In fact a recent PhD thesis by Emma Levitt, cleverly demonstrates, from the use of 16th century tournament score cards that Brandon was super careful never to defeat Henry, though he might have been the better jouster.

All this has made me wonder about the other historical "myths." I knew that Cnut wasn't trying to halt the waves, rather to demonstrate that he couldn't. I know that Marie Antoinette didn't say "let them eat cake!" But what are the others?

Here are some links:

www.writespirit.net/greatest-historical-myths/
The 20 Greatest Historical Myths. If more people knew the facts, a few of the great history-makers would be recognised (anyone heard of Ub Iwerks?), some ...

10 American History Myths You Probably Believe - All That Is Interesting

all-that-is-interesting.com/american-history-myths
2 Sep 2016 - The United States has given us a number of important figures and events to assess. These American history myths challenge your ...

listverse.com/2014/07/11/10-myths-about-historical-figures-we-still-believe/
11 Jul 2014 - When you are famous, people expect a little extravagance and peculiarity from you. The weird, outrageous, or simply unusual stories about ...

www.localhistories.org/histmyth.html
Here are some common myths about history debunked.

europeanhistory.about.com › ... › Reference and Resources › Historical Myths
There are an awful lot of known 'facts' about Europe's history which are actually false. Everything you read below is widely believed, but click through to find out ...

www.therichest.com/rich-list/most-popular/15-popular-historical-myths-busted/
23 May 2014 - However, history as we know it is filled with false myths and personalities that have nothing to do with the facts and records attributed to them.

History Myths Debunked | The Whole Truth and Nothing But the Truth

https://historymyths.wordpress.com/
Reenactors tell me they get this question all the time. As the women work around the campfire, on-lookers ask whether their hems are wet. Costumed ...

www.smithsonianmag.com/history/myths-of-the-american-revolution-10941835/
Perhaps more than any defining moment in American history, the War of ... Here, in order to form a more perfect understanding, the most significant myths of the ...

www.livescience.com/32087-viking-history-facts-myths.html
Modern perception of Vikings often cast these historic people as savage raiders with horned helmets. In truth, the Scandinavian people were ...


What are your favourites?

Really interesting post Mary and one with which I so empathise. I am forever coming across historical myths. I began to think that most of Eleanor of Aquitaine's life in popular history was a myth when researching her, the amount of wrong information and silliness that abounded in her biographies and online articles. Among other things several of her biographers gave her a half brother she didn't have because they'd read the primary sources wrongly, and which I blogged on for The History Girls. They also gave various descriptions of her appearance which were totally up the creek since there is no primary source record of what she actually looked like. There's a 'this might be a resemblance but who knows' on her tomb effigy, but that doesn't give her hair and eye colouring anyway, which are variously reported by her fanciful biographers (Meade, Seward, Weir, Boyd for starters) as being blonde, brunette, auburn for the hair and blue, green and black for the eyes. That's just the tip of the ice-berg. Perhaps all history is myth and what we want it to be!

Great post - I love Elizabeth's use of the term 'fanciful biographers' which is deliciously apt when some of them seem to write more fiction than we do!