This post is a companion piece to mine of November 10th, about the grand ceremony of confecting Venetian Treacle.

This post looks at what went inside this Venetian drug that captivated the imaginations of sick people from the old world to the new.

The name teriaca derives from the Greek therion, used to describe vipers or poisonous animals in general. It was celebrated in a poem by Nicander of Colophon in the second century BC. Originally it was used to treat bites from venomous animals but later it came to be used as antidote to all kinds of poisoning.

Of the antidotes used in antiquity the most noted was a theriaca variant - mithridatum, which was composed by the doctor of Mithridates VI, king of Pontus, who, constantly in fear of being poisoned, used it every day in small immunizing doses, after testing it on prisoners.

t was said that the recipe was uncovered in Pompeii in a box belonging to the king and from that we get the old name of the electuary of mithridatum.

It was Andromachus the Elder, the doctor of Nero, who perfected the recipe, adding the flesh of vipers to improve its efficacy. By this time the number of ingredients was up to 60.

And so was born teriaca magna or teriaca di Andromaco, as it would be known in Venice.

The recipe was further refined by Crito, the doctor of Trajan.

Galen wrote a treatise about it.

With the crusades came more trade with the Orient, and Venetian merchants introduced numerous medical preparations into Italy, among them teriaca.

It arrived in London in mediaeval times of Mediterranean galleys imported first under the supervision of the Worshipful Society of Grocers who named it “Venetian Treacle.” This, I suggest, is because it had undergone the “Venice effect” of adapting and sexing up with theatre and appeal to the imagination plus exquisite packaging.

The Venetians prepared it as an electuary, a thick syrupy liquid medicine, usually licked from a spoon.

Teriaca was the sovereign remedy for an infinite number of illnesses, from abdominal colic to malign fevers, from migraine to insomnia, from angina to the bites of vipers and dogs, from hearing loss to coughs. It was also used to cure madness, to reawaken sexual appetite, to bring vigour back to a body that was weak, and to protect people from leprosy and plague.

Teriaca was administered in various ways and quantities depending on the illness.

For fevers, it was used with wine mixed with honey; distilled water was the vehicle when it was used as a stimulant.

For teriaca to have the maximum efficacy the whole body  had to be completely purged before it was taken.

Such was the Venetian faith in the efficacy of teriaca that every family, even the poorest, kept some, almost as a talisman, to safeguard themselves from all the ills that beset mankind.

In fact, those that kept old teriaca boasted that it was the strongest and best, because it was supposed to be left to ferment for a while. It was thought that teriaca wasn’t usable until six months – some even said six years – after it was made.


The composition of teriaca/mithridatum could vary from 54 to 70 ingredients, here in Italian and 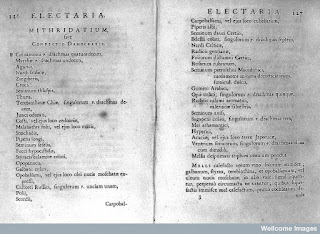 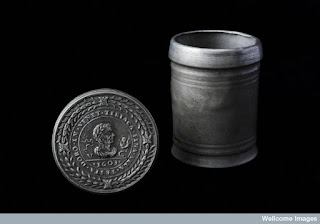 ingredients for teriaca in their 8 classes

The  ingredient that was always included was the flesh of vipers, and this too had its special methods of preparation.

They could only use non-pregnant females, which had to be caught in the Euganean hills in the spring some weeks after coming out of hibernation – not in the summer, otherwise they wouldn’t hold the antidote and would provoke excessive thirsts. Vipers caught before hibernation were too fatty.Once caught, they had to be dried and fermented to a precise point.The vipers were gutted; the heads and tails removed. Then the flesh was boiled in spring water salted & perfumed with dill, then worked into a paste with dry bread and then finally cut up and shaped by hand into little balls that were left to dry in the shade.

As a consequence of the great production of teriaca in Venice
the vipers of the Euganean hills became extinct, so the Venetian apothecaries were forced to buy them from the hills of Vicenza, Verona and later from Friuli. Finally the spezieri had to take to breeding them in tanks.


Here is a teriaca jar – a lead sample jar -
The lid is inscribed ‘TERIACA FINA ALLA TESTA DORO IN VENET’, 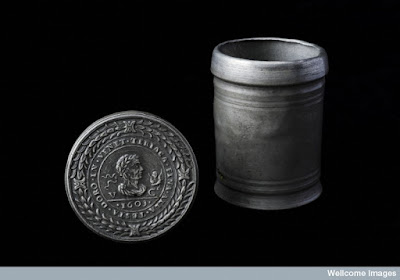 The big question - Was teriaca any use? I suggest that it was an excellent stimulant and a great boon to any suggestable patient who wanted to believe in it.

Meanwhile, it conforms in every other way to the perfect definition of a quack product – a cure all of exotic provenance, and very expensive.

Definitely sounds like snake oil to me, with real snake in it! :) Interesting to see how the term has gone on to mean convincing nonsense!

What a fascinating post! Beyond jealous that you live in Venice where Apothecary shops have such fabulous signs.

As Sue says, snake oil indeed! Thanks for a fascinating post, Michelle!

A hugely enjoyable post. I don't feel inclined to try the snake oil, however! But who knows how many of our current medicines will look as dodgy to future generations?