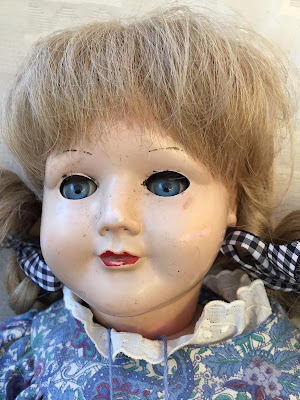 I got her in August, for my third birthday, but she was a Christmas present several times during my childhood, when she went to the doll's hospital and got new hair (I suspect now that during those cash-strapped days the trichologist was my mother).

I can't remember what her hair was like when I got her, and there aren't any photos: I do remember what seems in retrospect a horrific nylon gold wig, short and curly, of course, it being the '50s. 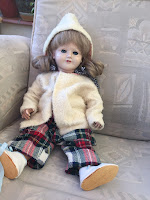 Here she is, dressed in the 'ski outfit' my grandmother made for her in the late '50s, with fashionable tartan trews. She has a dirndl from that era, too: yellow with white flowers, but unfortunately the apron has got lost. All these clothes were lovingly stitched on my grandmother's treadle Singer, French-seamed, and still perfectly robust. I had to grow up and start sewing for my own small children to appreciate the quality and intricacy of the work.

But in fact, Big Dolly was much older than me; she was once my mother's doll. If my mother had her when she was three, which I think I was told, she was made in 1928. She's a celluloid doll, but more solid and robust than most of the celluloid dolls I've seen in museums and books; she's celluloid imitating porcelain. I did see a doll a little like her (a cousin, maybe?) in the toy museum at Putbus, on the north German island of Rügen.

When my elder daughter turned three, she got Big Dolly (various given names have been tried for her, but they've never stuck), but she reverted to me and now she sits in the middle of books and papers on the massive desk that was once my German grandfather's; too fragile, I feel, for my grandchildren. My elder granddaughter shall have her when I'm gone, though.


She's not a collector's item, because she hasn't got her original hair or clothing, and actually, I'm glad of that. She's gone through so many changes, in different eras. Below is a picture of my mother as a child, with the boy baby doll 'as big as a real baby' that I never got, alas, because Omi, my grandmother, gave her to my brother to play with before I was born, and he was too rough with him and broke him. I think that doll was the flimsy kind of celluloid. The way my mother is dressed on the picture is probably indicative of the kind of clothes Big Dolly wore in her youth, in the '20s and early '30s. The maid sewed her drawn-thread work dresses, apparently. 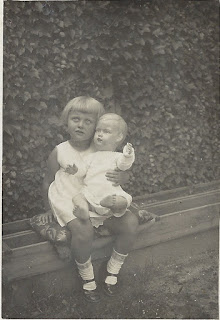 Big Dolly was there when the Nazi women came into the house and inspected it, when my grandfather was in disgrace in 1933. Seven years later she sat through air-raids in the flat in Geidorfgürtel, Graz, while my mother and grandmother sat downstairs in the cellar with colanders on their heads as improvised helmets, or while my grandmother took my mother off to a church where my mother cowered, terrified, and my grandmother prayed, certain that churches never got bombed (though they did of course). She'd have looked at the flashing marker flares the Austrians called 'Christmas trees', at incendiaries and blockbuster bombs, her serenity untroubled. Or did she permit herself, then, to whimper with fright and sob? Surely, some of the things she lived through were enough to make even a doll cry.

Later, the Russians came into the flat and took it over for a brief while, banishing my grandmother to the maid's room. If one of them had taken a fancy to Big Dolly for their children, she might have ended up in Russia. Or did my grandmother hide her?

After the war, in 1946, my mother and grandmother were deported to Germany, taking only essential possessions. Big Dolly sat in the empty flat for about a year. 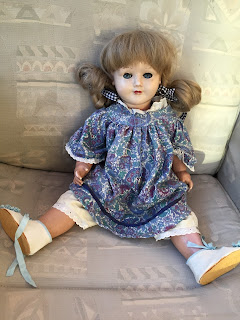 At last someone came for her; my grandfather sent my grandmother off to cross the border illegally, bearing a lot of useful and scarce black-market items (my mother mentioned thread, hence Effi's hoard in 'Last Train from Kummersdorf'). Omi sold these in Graz and raised enough money for everything they valued to be transported from the flat, smuggled back over the mountainous border (given the sheer weight of things like the aforementioned desk and the Steinway piano, even if that's only an upright, that's pretty amazing. It must have gone in a lorry). Incidentally, my grandfather was a policeman.

Most of the things were installed in the Rhineland, but Big Dolly, with her doomed baby brother, came to England. Here she lived through the austerity of the '50s, the swinging '60s, saw me grow up, then my daughter. 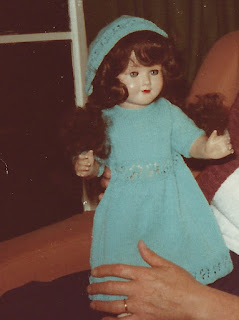 In the '80s, she got a dark wig and was briefly transformed into an Irish colleen. In the '90s, I got her a real hair wig, blonde again, because I didn't think the dark hair suited her; maybe that was just because I was more used to her being blonde. I made her that blue, rather Victorian-looking dress, which she wears most of the time, but some time, when I have a sewing machine again, I might make her a '20s dress, though I can't stretch to drawn-thread work.

I like it that she's gone through all these transformations, adjusting to the times. That's what being a real doll is about, after all. Old dolls often look scary; she doesn't look scary to me, though she is rather pale nowadays. Her blue eyes are sunken. One dolls' surgeon managed to correct this, but then they sunk again. Well, she is approaching ninety, after all.

Happy Christmas to all from a pretty venerable doll, and from me! 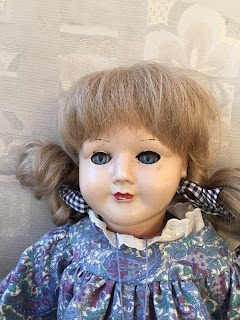 Here's the link to view her cousin in the Putbus toy museum (second from right in top row). http://www.puppenmuseum-putbus.de/bildergalerie.html

Beautiful and fascinating post, Leslie. No wonder you treasure your doll. It's a miracle that she's survived.

'Big Dolly' does sound like the matriach of a crime family, though. I imagine her sitting at a kitchen table with a cigarette and a glass of stout in front of her.

Oh, no, she doesn't smoke! But I don't mind her having a namesake who is just as you describe..I mean, I see what you mean. Or she could be a Southern States matriarch, like 'Big Mama.' I think schnapps would be her idea of fun, rather than stout. What I don't know is what my mother called her. She said once that she was 'Big Dolly' to her, too, but 'Grosse Puppe', doesn't somehow roll off the tongue. My mother had a terrible memory, so maybe she'd just forgotten.
I suppose it's possible though that she, and my teddy bears, and the balding kangaroo-fur koala and the now whiskerless (and earless) grey cat Whiskers, are up to all kinds of things behind my back, regardless of their innocent faces. And marshalling hordes of Lego minions to do their bidding. Shall reflect on this.

Lovely doll, and what a life story!

How lovely to be able to trace the family history through some of the worst and best times of 80 years through a doll.