'Getting Pregnant the Medieval Way' by Karen Maitland

There’s been much discussion recently about whether certain expensive treatments sold by some private fertility treatment centres actually work. For centuries, women desperate to conceive have tried many different methods of getting pregnant, particularly on this day of the year – 8th December – because this was considered by the Medieval Church to be the day when a woman who wanted a baby was most likely to conceive.

8th December was the Feast Day on which the Church celebrated St Anne’s conception of her daughter, the Virgin Mary. Therefore, a woman praying at one of the important shrines to Mary, such as Rayne, near Braintree in Essex, stood a good chance of becoming pregnant.

But the 8th December was also the feast day of a 6th Century saint, St Budoc and his conception proved not quite as happy for his mother, Azenor. According to legend when she revealed that she was pregnant her husband accused her of adultery, stuffed her in barrel and threw it into the English Channel. Azenor gave birth to Budoc whilst floating in the sea, and the barrel containing mother and babe was eventually washed ashore in Ireland where Azenor provided for her son, the future saint, by becoming laundress at Beau Port monastery, near Waterford.

In the Medieval and Tudor period the inability of a noble woman to give her husband an heir could, as we know, result in him divorcing her, incarcerating her in a nunnery or even finding a way of killing her, so women of all classes often resorted to drastic methods to conceive.

In fishing communities, women were advised by their mothers to make love when the tide was coming in as that would wash a baby into the womb.

It was also a long-held belief that if a woman was having trouble conceiving, a friend should give her parsley seeds to plant. As the parsley grew, a child would grow inside her. Since parsley is very slow to germinate – ‘the seeds go down to the devil seven times before green rises above the earth’ – this may have been simply a way of helping the woman to ‘relax and give it time.’ However, on no account was the woman to eat the parsley as they also believed if it was eaten three times a day it would produce an abortion. Another widely used herb, for those who could afford it, was the very costly mandrake root which is mentioned as an aid to fertility as far back as the Book of Genesis. 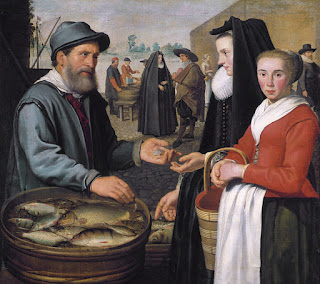 fish have been associated with fertility. The salmon was a symbol of a woman's sexual organs. One medieval recipe for getting pregnant was to take a fish that had been found inside another fish and fry it with a hare’s liver until both were dried. Grind to powder with flour and drink in water. The hare was linked to the ancient goddesses of fertility, so many fertility remedies involved consuming parts of a hare, including drinking powders made from its dried skin or stomach. If the woman wanted to conceive a boy she should drink a powder made from “hare’s eggs” – the testicles of a male hare – before making love.

Some fertility aids sound decidedly unhygienic today. One calls for a woman to insert the brains of a male and female bird into her ‘womb’ before sleeping with her husband. Another to smear the fat and brains of a dove on her ‘privy parts’ for three days, or the brains and blood of a bat. One ‘cure’ was for a woman to sit or lie above a pot in which the lungs and liver of sheep were boiling in wine, so that the fumes entered her womb. Only when this had thoroughly ‘warmed her’, should her husband lie with her, and then only in a warm and draught-free room. 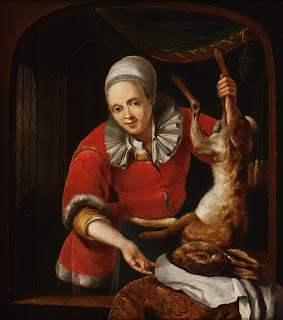 Women could buy amulets of herbs or charms from cunning women or they could make one themselves from a hen’s egg containing a live chick. The whole thing was burned and the ashes tied in bag bound with green and white thread and hung round the neck.

A number of communities also had stone-keepers. There were many sites which, from ancient times, had been places where women would make offerings to the old gods or spirits to help them conceive, these included figures of men and animals carved into the hillside, certain standing stones, some rocking stones and springs such as The Well of Fertility (Tobat an Torraidh) on the Isle of Sky, to which cattle were driven to drink to help them conceive and which women used for the same purpose. Many of these ancient pagan sites were destroyed or taken over by the Church during the medieval period, but small stones were carried away from these places and handed down through the generations to the stone-keepers.

If a woman wanted to conceive she went to the stone-keeper who allowed her to hold the stone and the spirit of the place from which the stone had been taken was believed to call a child into her womb. Even today, there is a male stone-keeper in Lincolnshire who has a stone which has been used for generations and is said to have originally come from Cahir, County Limerick, Ireland. Money never changed hand for this service, but the woman was usually required to leave some kind of offering which was personal to her such as a rag from a favourite dress.

Up until 1920’s the pillars of Saint Paul’s Cathedral, London were believed to have been hewn from stone taken from an ancient fertility site and were regularly embraced by women who wanted to conceive, as was a granite block on a hill in Glenavon, Grampian.

Drinking milk of various animals or drying it and using it a pessary was also recommended by many medieval physicians because of the obvious link between lactation and pregnancy. Donkey milk, horse, deer and bear milk were among those thought be most effective in aiding conception. I wonder who volunteered to milk the bears!

But Christmas will soon be upon us with its bunches of mistletoe which have long been associated with fertility. A medieval woman who wanted to conceive would tie a sprig close to her belly or around her arm, so be very careful where you put your mistletoe this festive season!

What a fascinating - and at times horrifying - post. My three children were born in either August or September!

Thanks, Karen - that was quite an education!

I'm remembering Sue Price's HG post about the Hungry Gap recently, and wondering whether that December conception date meant that the baby would arrive just as the lean time was ending. Not a conclusion, just a pondering thought.

I am Mariam,from what I can read. It has been sad news and scam to everyone about Voodoo casters or so. But to me they are so real because one worked for me not quite long ago.i met this man on a blog his name is Dr Abalaka is a very powerful man.I traveled down to where his shrine his and we both did the ritual and sacrifice.he had no website yet but he promised to create one as costumers are requesting for it, and now i'm free from the powders of sickness.I don't know about you but Voodoo is real;love marriage,finance, job promotion ,lottery Voodoo,poker voodoo,golf Voodoo,Law & Court case Spells,money voodoo,weigh loss voodoo,diabetic voodoo,hypertensive,depression healing voodoo etc,high cholesterol voodoo,Trouble in marriage,Barrenness(need a child),Luck, Money Spells,he also cure any cancer and HIV,it's all he does. I used my money to purchase everything he used he never collected a dime from. He told me I can repay him anytime with anything from my heart. Now I don't know how to do that. If you can help or you need his help write him on (dr.abalaka@outlook.com) and also his cell number: 760-935-3804 you can text him because he use to be very busy some times,i believe that your story will change for better,or if you have any question you can contact me here as mariambaurice@gmail.com best of luck.