'The secret ministry of frost'... Coleridge and Nether Stowey: by Sue Purkiss

A couple of weeks ago, while the weather was still sharp and bright and frosty (as opposed to dim and damp and dismal, as it is now), we went down to Nether Stowey, which nestles at the foot of the Quantocks, not far from the West Somerset coastline. It's a beautiful spot. Close by is the house where William Wordsworth came to stay in 1797, Alfoxden. He came there in part to recover his equilibrium after a turbulent few years in which he first became inspired by the ideals of the French Revolution (and fell in love with a French girl, Annette Vallon, who had his child), only later to be horrified by its excesses.

A particular reason for choosing this area was that his friend, Samuel Taylor Coleridge, was living in a cottage in Nether Stowey with his wife Sara and their baby, Hartley. They were very close at this time, and were collaborating on a book of poems which they were to call Lyrical Ballads - which was to create a colossal shift in the language of poetry, and in the kinds of subjects which inspired it. The two poets wanted to move away from the elegant, mannered artificiality of the Georgian Age, in favour of something they saw as much closer to life and to nature and to a deeper reality, something fresh and new and exciting.

Alfoxden is a large white house which looks out towards the sea; Wordsworth was able to afford it because he'd recently been left a generous legacy by a friend. Coleridge's cottage, which has just been restored by the National Trust, is small and must have been very cramped for a family. After its recent refurbishment, it looks charming. But when the Coleridges first rented it, the house was suffering from damp and neglect. Samuel and Sara worked hard to make it more habitable; Sara sewed curtains and I expect they white-washed the walls; regular fires dried it out - and friends, particularly Wordsworth, dropped in regularly. The conversation must have effervesced - it was such an exciting time, with new developments in astronomy, ballooning, exploring and science: a time when there wasn't the division between art and science that there is now, a time when anything seemed possible. These men were close to the centre of it all. So was Dorothy, Wordsworth's sister. But Sara? Well, probably not so much. Sara did not,have an easy time of it. There was a story we were told at the cottage: that one morning, Sara was warming milk for the baby on the fire. She accidentally spilled some of it on Samuel's foot, scalding it so that he was unable to go on the walk he was planning with a couple of friends.

He was disappointed and cross and very sorry for himself, and he limped off outside to sit under a lime tree and gaze out in the direction his friends had gone. And according to the story, this was the starting place for his poem, The Lime-Tree Bower. It's an eloquent, passionate poem, full of awareness of loss, the passing of time and separation from friends.

Well, they are gone, and here must I remain,
This lime-tree bower my prison! I have lost
Beauties and feelings, such as would have been
Most sweet to my remembrance even when age
Had dimm'd mine eyes to blindness! They, meanwhile,
Friends, whom I never more may meet again,
On springy heath, along the hill-top edge,
Wander in gladness, and wind down, perchance,
To that still roaring dell, of which I told
But I have to say - I feel sorry for Sara. It was hardly the end of the world. She didn't mean to spill the milk. And if he'd been helping her, instead of sitting around planning his walk with his pals, perhaps she wouldn't have been in such a fluster and it would never have happened. But that was the way it was with them: the marriage wasn't to last.

The Trust has done a brilliant job with the cottage. At the moment, it has been decorated as it might have been in Georgian times; there is a Christmas tree, but it's decorated with dried slices of orange and (perhaps?) little bunches of cinnamon sticks. (I had always thought Christmas trees were a Victorian invention, but apparently this is not so: Queen Charlotte is thought to have introduced them, in the 1780s.) There's a scent of cloves and other spices, and woodsmoke from the fire. The volunteers are dressed in clothes of the time, and they're knowledgeable and very welcoming; you're encouraged to touch things and try clothes on, to sit down at a desk and write a message with a quill pen dipped in ink - not easy! - to read from the extensive collection of books that line the walls of the reading room.

And that morning, someone sat by the fire in the tiny parlour and read some of the poems that were well-known at the time - including The Night Before Christmas, which was popular then in America. But most memorably, he read an excerpt from Coleridge's own Frost at Midnight. At his feet was a wooden cradle, and he rocked it gently with his foot. The firelight flickered on the walls, and when he began - very beautifully - to read, it was as if we were actually there, with Coleridge himself, in the middle of the night, with nothing stirring except a candle flame and the occasional mouse.

The Frost performs its secret ministry,
Unhelped by any wind. The owlet's cry
Came loud—and hark, again! loud as before.
The inmates of my cottage, all at rest,
Have left me to that solitude, which suits
Abstruser musings: save that at my side
My cradled infant slumbers peacefully.

I did English at Durham, and I remember a good many lectures on the Romantic poets and the significance of Lyrical Ballads. But I think I learned more about Coleridge and Wordsworth and what they were trying to do in one hour in Nether Stowey than I did in many hours in lecture rooms and libraries. A sense of place - such a powerful force, and here so skilfully mediated.

Afterwards, we went down to the coast at East Quantoxhead. The rock formations there are quite extraordinary: I wonder what those late 18th century visitors to Coleridge, intensely curious and observant, made of them? 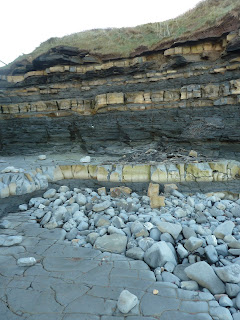 I visited the cottage about 10 years ago with my three young children. Back then, only a couple of fairly empty rooms were open with a glass display case upstairs. However the room attendant was very happy to chat to the children and they still remember the place and the poet. We bought a copy of the Ancient Mariner in the cottage bookshop and went on to look at the statue of the albertros in Watchet harbour.

Yes, we first went some years ago. It's masses better now.

How magical it sounds, but what a telling story about the spilled milk...An insight indeed. Thank you!

Right, I know where I'm going on my next visit to England! Goodness, Coleridge was a sook! I guess it's a thing with poets, it's how they work. But who would have thought that lovely poem was so literal, about missing out on a walk?

Come and see us if you do!

Lovely post, and I rather think I know whose side I'm on with that spilled milk.