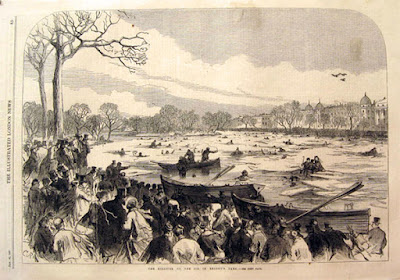 It is certainly a very vivid account - amazing that he survived. I'll certainly think about it next time I'm there.

A very powerful account! But I wouldn't be too annoyed with your grandmother. It's amazing what you could swear you remember. Now, I have a vivid memory of hearing about the drowning of our Prime Minister Harold Holt, from another student, who cried, "The Prime Minister has drowned!". I remember being in a shed at school, working on the set for a school play. Later, I realised it couldn't have happened as I remember it, because it happened during the school holidays, in December. Yet I still remember it. I have no idea how or why.

Gripping! And a powerful example of how memory cannot always be trusted.

Fascinating post and comments! And it sounds much worse being ENGULPHED by icy water than merely engulfed! ;-)