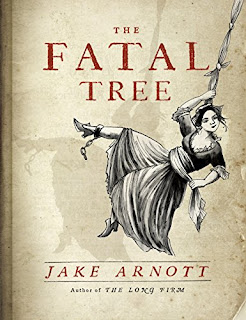 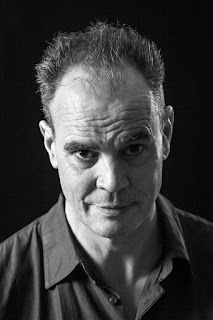 This month I'm happy to introduce a guest writer who isn't a girl, but don't worry, his new book features a particularly interesting woman from history, Edgeworth Bess, harlot and consort of gaol breaker extraordinaire, Jack Sheppard.  Jake Arnott is a smart and incisive writer whose previous novels include The Long Firm, He Kills Coppers and True Crime.

His new book, The Fatal Tree, covers a period particularly close to my heart and is set in a London, as usual, riven by inequality and crime.  The novel is a beautiful read, rich with criminal slang, or cant, and those of us with a penchant for the 18th century will, I am sure, love it too.

So when I had the opportunity to ask Jake Arnott about his rather special new novel The Fatal Tree, I thought I would share his reply.

I found myself in the 18th century quite by chance. I’d been asked to do a video commentary on Jack Sheppard for an exhibition on Georgian culture at the British Library. I knew something about this housebreaker and escape artist who’d become famous for breaking out of the condemned cell at Newgate, and his wicked nemesis the thief-taker Jonathan Wild. The story has been told many times, famously by John Gay in The Beggars’ Opera and I knew it via Bertolt Brecht who transforms it into The Threepenny Opera, which was a big influence on my first novel The Long Firm.


So I felt a meandering connection to the 1720s but as I did a little more research on Sheppard as ‘celebrity villain’ I was shocked by how immediate this period seemed to me. The South Sea Bubble had just burst, marking the first collapse of global capitalism and yet the gap between rich and poor just got more and more extreme. London was expanding rapidly and there was an explosion of new media. Criminal narratives were all the fashion providing much work for the Grub Street ‘hackney-scribblers’. Then there were the pamphlet ‘paper-wars’ that provided the buzz of gossip for the coffee-houses –those ‘penny-universities’ where for the price of a cup you could get access to  all the journals of the day (which seemed to me much like internet access).

Then I found Elizabeth Lyon, the notorious Edgworth Bess who, it was said, lead Jack Sheppard astray and then betrayed him to the evil thief-taker Wild. Jack’s wonderfully barbed comment that ‘a more wicked, deceitful and lascivious wretch there is not known in England’ hooked me in but as I did some research I found Bess was more than a mere Georgian femme fatale. Here was a tough woman that needed to use her wits to survive. And she helped Jack to escape from Newgate after her supposed betrayal. It seemed that it was Sheppard that forsook her in the end and I wanted to find a reason for that. So now I had a love story and a dangerous one at that. And pondering on dangerous love I re-read Rictor Norton’s excellent Mother Clap’s Molly House: The Gay Subculture in History 1700-1830. ‘Molly-houses’ were essentially gay pubs of the time and the raid on the infamous Mother Clap’s came just after the fall of the thief-take system in 1726. The original thief-taker was himself a molly. Had he been protecting the molly-houses up until that time? I had another world to explore which again seemed modern and familiar to me.

I found a dictionary of criminal slang known as ‘flash’ that I could use to pepper the text with authentic 18th century street language. I could also draw on the bitter sharp satire and irony of the great wits of the period. High and low in that society share a marvellous gallows humour. Of course the fatal tree of the title is thieves cant for that levelling device.
There’s not much on record about Edgworth Bess -some disparaging comments from other players in the tale and her own brief testimony at her trial –but I felt her version of events was calling out to be set down. An untold story is always a gift to a novelist as was the tension of the fatal tree itself. She has lived her life in its shadow, will she escape it in the end?


The Fatal Tree is out on February 23rd next year and I would hurry along and pre order if I were you.

I wish all of us a better new year than the last and plenty of good reading and writing.
Much love


If you fancy a late Christmas present my Blade and Bone sequel to Sawbones is out now. And if you fancy a novel set in the early 18th century demi mondaine but suitable for 10+ my novel A Nest of Vipers is still available.
Posted by Catherine Johnson at 06:50

Dear Catherine, I had not realised that you are leaving us. Bonne chance and happy writing. Carol x

Thank you for this post, Catherine. I'll certainly look out for Jake Arnott's 'The Fatal Tree' - 18th Century low life, flash men and molly houses - it sounds right up my street! I'll be sorry to see you leave the History Girls. I've really enjoyed your posts over the years and as one of the original members, you'll be sorely missed.

The Fatal Tree sounds wonderful! So sorry to see you go - I always really enjoy your posts. As Carol said - bonne chance and happy writing!

Thanks for all your posts, Catherine - you'll be missed!

Hey Mike! Massive thanks for that was wondering where to find a spell caster - and reminds me of the time I did research in the Metropolitan Witchcraft division - not a Ben Aaronovitch construct but an actual dept - although only three operatives.....

But thanks to all HGs, you are wonderful and Mary has done stellar work here. I love the posts, always something different and interesting to read xc

I've deleted Mike's comment. Where do these people come from? Anyway, sorry to see you go and thanks for all the posts.

Good luck with all your new books!