The Drover's Dogs by Susan Price


'Some years ago the late Miss Stewart Mackenzie of Brahan, Ross-shire, informed a friend that in the course of journeys by coach in the late autumn from Brahan to the South during her childhood about the year 1840 she used frequently to see collie dogs making their way north unaccompanied. On inquiring of her parents why these dogs were alone, [she] was informed that these were dogs belonging to drovers who had taken cattle to England and that when the droving was finished the drovers returned by boat to Scotland. To save the trouble and expense of their transport, the dogs were turned loose to find their own way north. It was explained that the dogs followed the route taken on the southward journey being fed at Inns or farms where the drove had ‘stanced’ and that in the following year when the drovers were again on the way south, they paid for the food given to the dogs...’


It was this quote from A. R. B. Haldane’s ‘The Drove Roads Of Scotland,’ which gave me the idea for ‘The Drover’s Dogs.’ I first read Haldane something like ten years before I started writing it. Those dogs spent all those years prowling around my head, trying to sniff out a story.

I’ve often been struck by how dogs distinguish between human adults and children, even though the child may be much bigger than the dog. I once knew a large Staffordshire bull-terrier who very clearly understood that I was a junior member of the family and took up a very protective attitude towards me. I’ve been told of collies who appoint themselves protectors of children at family gatherings, rounding them up and herding them together. They don’t attempt to herd the adults: only the children.


So I began thinking of a child in trouble, who runs away and is adopted and protected by the drover’s dogs. At first, I planned on the boy being an escaped factory ‘apprentice.’ These were child-slaves in all but name, who were bought from workhouses on the pretence that the money paid was to indenture them to a trade. This was a corruption of the long and honourable tradition of apprenticeships. The factory ‘apprentices’ were taught no skill except how to operate unguarded machinery, were badly-fed and clothed and, at night, were locked into the factory sheds where they slept on the floor.


There were various reasons why this didn't work for the book I wanted to write. The dates didn't fit. Before the factory system was well underway, the droving trade was dying. Also, I wanted my drove-roads to be in Scotland and most of the factories which used children as slave-labour were a long way from Scotland. My runaway boy would have had to run a hundred and fifty miles or more before he met my drove dogs.


Then my Scots partner, told me about the ‘bondagers.’ These were farm-labourers who were ‘bonded’ to a farmer and in Scotland, this system survived into the early years of the 20th Century. They often wore a distinctive costume — especially the women — which distinguished them. It seems, like many other professional costumes in the UK, to date from the 17th Century.
For many centuries, in all parts of the UK, farm-labourers went to Hiring Fairs, and stood in a line, offering themselves for hire to farmers, who chose a likely looking man, or girl, and came to a deal with them about board and wages. The term of hire usually lasted for a year, from May to May, and the labourer might be provided with lodgings and food. Even clothing, or cloth to make it, might be included.

In the North of England, and in Scotland, this system took on its own nature. A farmer would often hire a ‘hind’ or ploughman with the expectation that the hind’s family would supply additional labour at no extra cost to the farmer. (In the same way, fishermen’s wives and daughters were expected to work day after day at the stinking, dirty job of cleaning fish without being paid themselves.) If a hind’s children were too young to work and his wife unwilling or unable, then a hind would often hire people from outside his family, to fulfil his obligations to the farmer he worked for.


In theory, an unhappy farm-worker could leave his or her place and find other work. But in practice, it wasn’t so simple. There was no union, and pay was often desperately low. If you left one place, you couldn’t be sure of finding a better one — and risked earning a reputation for being unreliable, so no one else would hire you.


Also, under the system in the North of Britain, if a whole family was hired as a unit, then your sense of loyalty to your family was brought into play. If a teenage son or daughter left, this might result in their parents and younger siblings being turned out of work — perhaps even out of their tied cottage. Younger children had little choice if their parents set them to work.


My partner told me of an account he’d read, by an elderly man recounting his childhood. He’d been ‘bonded’ to a farmer who mistreated him, fed him badly and worked him beyond his strength. At night he had to sleep in a cold, damp shed, on a damp mattress through which thistles grew.


He'd escaped this by joining the army when World War I broke out. All his fellow recruits complained bitterly about the terrible army food, the stark barracks, the uncomfortable beds and coarse uniforms — but the bondager-boy couldn’t remember ever being so well housed, clothed and fed. He thought all his birthdays had come at once.


It was this boy I bore in mind when I invented Sandy Longmuir, the hero of The Drover’s Dogs who, at ten years of age, is bonded to a farmer until he’s twenty-one.  “I remember the day my mother sold me very well,” Sandy says. He doesn’t appreciate his mother’s desperation and is heart-broken when he runs back home to her, and she makes him return to the farm. “Thomson paid us good money, and that money is spent. You’ll go back.”


When Sandy cries out that, if she makes him go back, he will never love her or speak to her again, she replies, “I will bear that burden along with all the others.”


So Sandy returns to the farm and is beaten for running away. After that, he decides that he cannot bear this life for another eleven years and, despite believing that he will be hung for stealing himself if he’s caught, he waits for a dark night and runs away.


Fearing pursuit, he walks himself into exhaustion and finally lies down and sleeps beside the road.


I lay on the grassy bank beside the drove road, locked up tight in sleep. I was jerked awake to darkness and cold, my ears filled with a wet snorting and snuffling.


Above me, outlined against the night sky, were two pointed ears. Something panted, and dripped water on me.


My head filled with monsters – things from the bottom of lochs, dragging themselves ashore, stinking of mud, to sink their fangs into me…A wet nose shoved under my chin, and whiskers prickled me. A hot tongue slathered across my cheek. I was about to be eaten!  Then the monster said, “Rrroof!” And I laughed. I forgot all about monsters. I forgot about being cold, damp and by myself in the dark at the side of a road. Or, at least, I minded those things less – because I knew I had been woken by a dog, and a friendly dog at that.

Sandy realises that he has fallen in with drovers’ dogs on their way home, and decides that he will follow them to wherever they’re going, since he has nowhere in particular to go. He fancies himself a man in charge of two dogs — but soon discovers that it’s the dogs who are in charge.


I don’t think those dogs ever mistook me for their master. They were good herd-dogs and I think they knew exactly what I was — a little calf, lost from the herd. A lost little pup wandering loose. They knew that what they had to do was take me in charge, and herd me along, and watch over me, until they had brought me somewhere safe.

So I’d engineered the meeting of boy and dogs — now all I had to do was discover where they were going, and get them there ‘over Scotland’s lochs and mountains.’


I hope to tell of that, and more of the droving trade, in another blog. 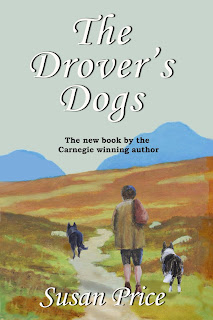 The Drover's Dogs is the first of her books to be a self-published original.


The long-awaited third book in her Sterkarm


trilogy, Sterkarm Tryst, is now available for pre-order at Amazon. 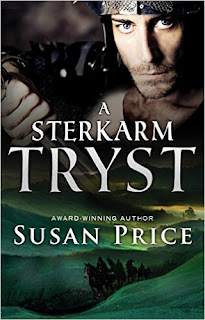 Thanks to Susan Price for stepping in with a reserve post as Antonia Senior is dealing with illness in the family.

Hugely moving!It does seem dreadful that children used to be bonded in this way - still are, of course, outside Europe, and what happens to trafficked children? I shall be ordering The Drovers' Dogs forthwith.

Excellent blog!I, too, have long been fascinated by the drovers and their dogs but mine came from West Wales droving across the Midlands to Smithfield Market in London. They, too, have a tradition of dogs who made their way home. One called Carlo took this master's saddle all the way back to Carmarthenshire, or so the story goes. I've long thought of making a book out of it, but have never got round to it. Great minds think alike! I'll certainly be reading yours, Susan, and maybe I'll write my own - you never know! I'll also be pre-ordering your latest Sterkarm. Can't wait to read it!

farewizards-flight said...
This comment has been removed by a blog administrator.
13 December 2016 at 12:50

Leslie - thank you! And you're right about the child-slavery that exists now. I don't think these evils, or the kind of mind-set that produces them, ever goes away. Laws and social attitudes just make them more or less profitable and acceptable at different periods. The slightest relaxation of those laws and attitudes, and they flourish again. Freedom = eternal vigilance and all that.

Celia, I remember talking to you about drovers and you telling me that your drovers, if you ever wrote the book, would be Welsh.
I love the idea of the dog taking the saddle home! How did he carry it? Get on and write the book!

This is great. I knew nothing about the drovers - or not much - until I last year when I read loads in a library at builth wells. Celia did you know until the middle of the last century there were still pubs in Hampshire with massive painted signs in welsh for the drovers?
So much history, ordinary people's history is lost, thanks for keeping it alive Susan