THE BELLS, THE BELLS! by Penny Dolan 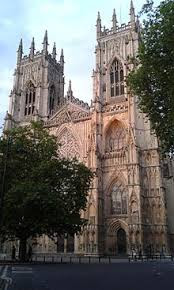 Last week, meeting friends in York for lunch, I heard the clock chimes ring out from the Minster, reminding me that York, like many old cities, once resounded with the ringing of bells, which grew from the simple marking of the liturgical day to the complex change-ringing that became a popular practice after the Reformation.

Only half-heard in our noisy world, church bells can still punctuate our lives and calendars. From my Harrogate garden, I hear a variety of bells: a single bell calling out a service, joyful wedding peals or a solemn official ringing for whom or why I may never know. Soon, when the last day of December comes, I will stand on my doorstep, breathe in the cold night air and hear the church bells ringing in the New Year, a proud chorus still audible among the brisker tattoo of exploding fireworks.

How the New Year celebrations will sound in York is uncertain. A disagreement between the Minster and the Minster Society of Change-Ringers – a tale that almost has echoes of Trollope or Hardy – has resulted in this news that no bells will ring out at this ancient Minster for Christmas, or to ring the New Year in.

Bells are a beautiful sound in the imagination, but people don’t always welcome the sound of bells chiming constantly. Often there are records of newcomers and visitors protesting about historic bells ringing outside their home or hotel , even though inhabitants have lived with the sound for years and hardly notice it, though it will have seeped into their souls.

In response to an incomer’s legal complaint about the quarter-chimes at Old Saints Church, Wrington, A.N.Wilson once wrote:

“For more than 100 years, the bells have marked the quarter hours. The people of the village have absorbed the striking of the church clock into the inner music of their hearts. Anyone who has lived within the sound of such chimes knows how this happens.

On the rare occasions when I spend a night in Oxford, the keeping of the hours by the clock towers in New College, and Merton, and the great booming of Tom tolling 101(sic)  times at 9pm at Christ Church are inextricably interwoven with memories and regrets and lost joys. The sound almost sends me mad, so intense are the feelings it evokes. . . .

We are a people "summoned by bells", to quote the title of John Betjeman's autobiography, and both the chiming of the hours and the complex art of bellringing are the inner music of our lives in towns and villages all over the land.”

The sound of bells rings out in several stories and poems, singing out their hidden messages. In Dorothy L Sayers “The Nine Tailors”, Lord Peter Wimsey’s knowledge of campanology solves the mystery of the jewel theft and murder.  Change ringing came in after the Reformation, when the simple bell, spindle and rope of earlier centuries was gradually replaced by the new technology where the new bells were mounted on whole wheels in the bell tower, and rung with ropes from below. You can find out more about the history of bells here.

Bells, in literature, carry poignant messages.  Thomas Gray’s famous elegy in an English country churchyard opens as “the curfew tolls the knell of parting day”. That curfew bell was an age-old law-and- order signal for people to return home: only an outlaw or thief would be out wandering at night. Moreover, that hour, that day, and that time itself had passed and gone. 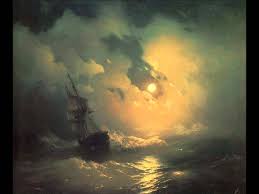 Bells are there to warn travellers  of alarms and dangers, especially at sea.

In Robert Southey’s poem (1820) Ralph the Rover, having cut free the bishop’s bell, meets his own well-deserved doom when his ship wrecks on the Inchcape Rock.

Sir Ralph the Rover tore his hair,
He curst himself in his despair;
The waves rush in on every side,
The ship is sinking beneath the tide.
But even in his dying fear,
One dreadful sound could the Rover hear;
A sound as if with the Inchcape Bell,
The Devil below was ringing his knell.

The Victorian poet Jean Ingelow, writing “High Tide off the Coast of Lincolnshire 1571,” created a fictional name for the ring change that alerted the inhabitants of on-coming danger. Although  ”set” in 1571, Ingelow drew on her own knowledge of the 1815 floods at Fosdyke, Lincolnshire, where a servant girl drowned while out looking after cows.
The old mayor climb'd the belfry tower,
The ringers ran by two, by three;
"Pull, if ye never pull'd before;
Good ringers, pull your best," quoth he.
”Play uppe, play uppe, O Boston bells!
Ply all your changes, all your swells,
Play uppe, 'The Brides of Enderby.'"
Men say it was a stolen tyde--
The Lord that sent it, He knows all;
But in myne ears doth still abide
The message that the bells let fall.

Over the centuries, bells were a one sure way of sending reliable news to a great many people and, during WWII, all church bells were silenced, their chimes reserved as a warning of sea-born invasion. 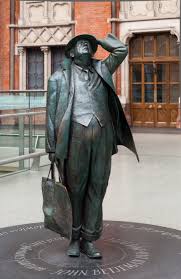 When peace came, the bells rang out but often over different landscapes. Betjeman, writing his Monody on the Death of Aldersgate Station, a station bombed in 1941, described London’s “steepled forest of churches” ringing again on a Sunday:

Sunday Silence! with every street a dead street,
Alley and courtyard empty and cobbled mews,
Till “ tingle tang “ the bell of St. Mildred's Bread Street
Summoned the sermon taster to high box pews,

And neighbouring towers and spirelets joined the ringing
With answering echoes from heavy commercial walls
Till all were drowned as the sailing clouds went singing
On the roaring flood of a twelve-voiced peal from Paul's.

Yet, despite the bells, the poem ends with Betjeman grieving at the sight of the new brash city architecture arising out of the ashes.

It was from London, too, that the sad news came that inspired my thoughts for this post today. That most admirable blog, Spitalfields Life, (which arrives by email daily once you have signed up) had a post at the start of December about the closure of the Whitechapel Bell Foundry, which was started in 1570. Do take time to read the post, and the interview, which you'll find here, as well as several excellent photographs of bells.

Ever since I first heard of that Whitechapel Foundry, it has formed part of that vague and oddly-made creation: my personal mind-map of London, an imagined collage of all the good and interesting things about that huge city that was once my home. Furthermore, the Whitechapel bell foundry is closing because, apparently, there is not enough commercial demand for bells in the modern world for the Foundry to stay where it has been all these years.  How very sad. How very silent.

Meanwhile, back to York Minster to end with some joyous sounds:


I’d like to close my last post of 2016 by sending good wishes to all the History Girls, past and present, whose varied posts inform, amaze and inspire me every day - and to wish all History Girl readers a happy holiday.  Ring out, wild bells - and good wishes for a better New Year.

Very interesting post, thank you Penny! And a very Happy Christmas to you too!

Happy Christmas to you too, Katherine.

Happy Christmas to you, too.

It may cheer you to know that while the Whitechapel bellfoundry is closing, Taylor's of Loughborough are still going strong, and there are some smaller foundries as well.

As a ringer, 'The Nine Tailors' always amuses me a little as the idea of anyone (even one as talented as Lord Peter) being able to show up and ring a 9 hour, long length peal after not ringing at all or years is... improbable, to say the least!

Thanks for your insight, Marjorie, and the mention of Taylor of Loughborough. Penny.

Thanks for your insight, Marjorie, and the mention of Taylor of Loughborough. Penny.

Lovely post! I was at university in Durham, and did my finals papers a stone's throw away from the cathedral. I still remember the bells, chiming relentlessly as time slid away and panic set in...