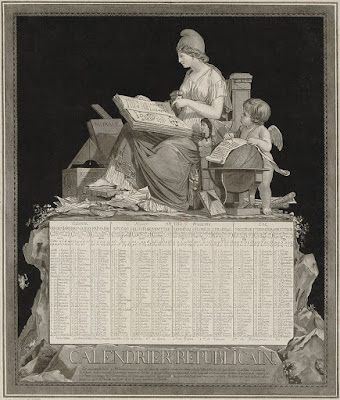 I think we’re all feeling rather battered by the pace of change over the last year. How would it feel to be living through a period of really cataclysmic revolution?

“Bliss was it in that dawn was it to be alive,
But to be young was very heaven,”

as Wordsworth wrote in his Prelude. But was it? In principle I tend to be on the side of changing the world but I’m not sure how much many new ideas I could really accept. The generation of French people who managed to survive the Revolution were certainly challenged.

They had to get used to a new social and legal system as well as a new system of weights and measures, which became the metric system. The Catholic church was of course seen as a pillar of the ancien régime and ‘dechristianisation’ aimed to excise religion from French society. Talleyrand, the bishop of Autun and one of the few clerics to support the measure, argued that all Church property rightfully belonged to the nation and that its return, by helping to bring about a better society, should therefore be viewed as a ‘religious act’. In October 1793 public worship was forbidden and over the next few months all visible signs of Christianity were removed. Churches were sold, closed or converted into Temples of Reason, warehouses, factories or stables. Church bells were melted down, ostensibly to help the war effort, crosses were taken from churches and cemeteries and religious statues, relics and works of art were seized and sometimes destroyed.

Priests who continued to practise were arrested or deported to French Guiana. Under threat of death, imprisonment, military conscription, and loss of income, about twenty thousand constitutional priests were forced to abdicate and hand over their letters of ordination, and thousands more agreed or were coerced into marriage. Some of those who had abdicated continued to minister in secret.

As the old Gregorian calendar was of course Christian, the Republican Calendar was adopted in 1793 by the Jacobin controlled National Convention. There is something rather magnificent about this doomed attempt to reinvent time itself. 1789 became Year I of Liberty and months were named after the seasons. Nivose, from the Latin nivosus, or snowy, started on December 21. A new ten-day week eliminated Sunday as a day of rest and worship and each day was named after a seed, tree, flower, fruit, animal, or tool and was divided into ten hours. Each hour was divided into 100 decimal minutes, and each decimal minute into 100 decimal seconds. Special clocks were made to display this new decimal time. 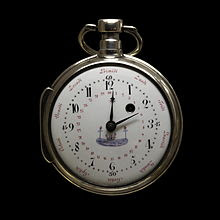 Christmas became Le Jour du Chien and Boxing Day the Day of Lava. Carols were altered by changing the lyrics so that the names of political leaders were substituted for royal or religious characters. Hark the Constituent Assembly Sing? As traditional street nativities were banned, French families started to reproduce the scene in their own house in miniature versions with clay figurines and it seems inevitable that other Christmas traditions continued behind closed doors.

For many the Revolution itself had become a religious cult; they commemorated revolutionary martyrs as saints and regarded the tricolour cockade and red liberty cap as sacred symbols. A new state religion. the Cult of the Supreme Being, was introduced. The Festival of the Supreme Being was held on 8 June 1794 throughout France and presided over by Robespierre in Paris, where Notre Dame was “de-baptized” for the occasion.

“The first festival of reason, which took place in Notre Dame, featured a fabricated mountain, with a temple of philosophy at its summit and a script borrowed from an opera libretto. At the sound of the Hymne à la Liberté, two rows of young women, dressed in white, descended the mountain, crossing each other before the ‘altar of reason’ before ascending once more to greet the goddess of Liberty.” 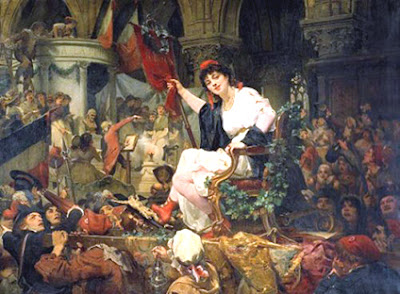 The Republican Calendar was abolished on 1 January 1806 by the Emperor Napoleon I. However, it was revived during the brief Paris Commune, which lasted from 6–23 May 1871 (or from  16 Floréal–3 Prairial An LXXIX).
Posted by Miranda Miller at 00:30

Gosh, I never knew about the decimal calendar, week, clock... How interesting! I can imagine it'd have been pretty hard to get used to: and did you go to the guillotine, as people went to the stake in Marian England, for getting it wrong?

It didn't take long for them to get back to the old ways, did it? I admit I hadn't heard of decimal time either. I'd love to be a fly on the wall at the committee meetings that worked tat out!