I love old school magazines. In 2004, when I was a teacher, I based an exhibition about the school’s experiences in World War One largely around a stack of 1914-1919 school magazines. In 2014, I revisited these magazines as stimulus for my story ‘Each Slow Dusk’ in Walker’s The Great War. I’ve also plundered them for convincing Christian names for my 1918-set teen WIP, and I'm always moved by the juxtaposition of hockey matches and deaths on the Western Front. 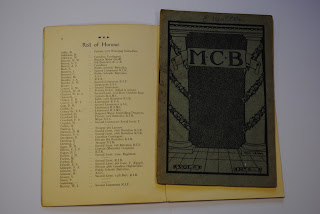 As I’ve confessed here before, I was always a History Girl. ‘Tell me about the olden days,’ I would beg my gran, born in 1908, and she obliged with stories of the shirt factory and Sunday school and naughty Aunt Annie smuggling a kitten up to bed in her pinny. I was enchanted by the kitten but even more by the pinny. The pinny was proof that Aunt Annie came from the real olden days.

The pupils from the magazines – all those Ediths and Kathleens and Gilberts  -- didn’t go to school with Gran and Aunt Annie – they were just that bit older and further up the social scale – but they might have sat beside them on the tram.

Mummy, born in 1947, came from the olden days too: not quite so olden but still firmly black and white, gym frocks and Elvis.

Then the world shifted to boring colour when I was born in 1968.

Because I didn’t come from the olden days. Obviously. And because I don’t have children, nobody has ever asked me, ‘Tell me about when you were a wee girl in the olden days.’ So, though I know rationally, that I lived through history – rather a lot of history, given that I grew up in seventies Belfast, I rarely, in my imagination, think of it that way. History was big, and happening somewhere else.

And then, last week, I saw this tweeted picture from my old school library. 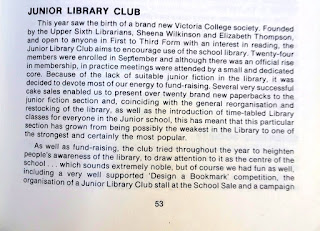 I was charmed. Elizabeth and I are still best friends, and I’m still trying to encourage younger people to read.  I’d forgotten about the Junior Library Club. But there it was, a tiny bit of the history of my own old school, and of my own olden days. 1987, it would have been. Not long enough to be proper olden days, of course. And then I thought again. When I was ten, my mum was thirty. The olden days she described were less than two decades ago. 1987 is nearly thirty years ago.

I do come from the proper olden days. I have only just realised it, thanks to Twitter and an old school magazine.

Just to see the word 'pinny' takes me back to my Grandma who was born on Tyneside & worked in Service around 100 years ago. My mother still calls her apron a pinny too sometimes, but no one else I know has ever heard of the word. Time has moved on so that I don't even wear an apron let alone a pinny!

I've recently discovered a blog set up for the enjoyment of people who went to my school around the time I was there. All those class photos with teachers I remember...

And we all live through history. I remember the day Armstrong walked on the moon - they let us go home early to watch it. You were a baby then. When I was researching the Beatles visit to Melbourne for a story, I found the newspapers fascinating, from the fainting fan being carried on a police horse to the ads for Beatles beakers going free with 30/- worth of dry cleaning! I was able to look up the cost of groceries and what was on TV that week, what was on at the theatre and the cinema.

Oh - and I discovered that the date on my birth certificate was wrong when looking for a front page for my day of birth! I knew I was born on a Friday, knew it without a doubt, but the day I had always believed to be my birthday was a Thursday that year.

Those old magazines - what a great resource!

This post has reminded me that I have some of my school magazines from the 1960s stowed away somewhere. And inspired me to go and look for them.

I have to admit I still wear a pinny occasionally. I'm also an Aunty Annie - but sadly there is no kitten in my pinny.

I've heard it called a 'peeny' before. I still love listening to what life was like 'back then'...and then hear kids of today calling stuff from my childhood 'retro'. Makes ME feel old!