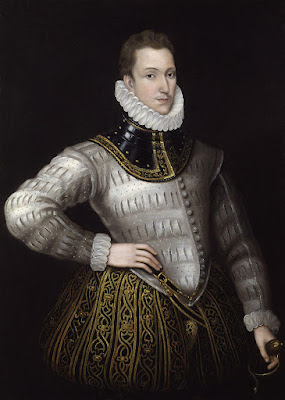 A long time ago when I was a student and reading a lot of 16th century literature, a friend and I got talking about heroes. Her 16th century hero was Sir (or Saint) Thomas More, the man for all seasons, the man who stood up to Henry VIII and paid the price with his head. Sir/SaintThomas for some reason has never really appealed to me, and my own 16th century pin-up was that very perfect knight, Elizabethan golden boy, courtier, soldier, poet and all-round Renaissance man, Sir Philip Sidney. Here he is, looking a bit stern perhaps – but he seems to have charmed nearly everyone he met. He’s still a favourite of mine because not only did he write the elaborate prose 'Arcadia' for his sister the Countess of Pembroke, in which the simple phrase 'It was spring' is delightfully embroidered into:

It was in the time that the earth begins to put on her new apparel against the approach of her lover, the sun, and that the sun, running a most even course, becomes an indifferent arbiter between the night and the day...

– but because he also delighted in the kind of simple old tale 'that holdeth children from play and old men from the chimney corner’. He wrote of popular ballads, 'I never heard the old song of Percy and Douglas that I found not my heart moved more than with a trumpet.'

The last two quotes come from his famous ‘Apologie for Poetrie’ which is a defence of invention: an argument against those Elizabethans who felt, uneasily, that it was somehow wrong and childish to concern themselves with something ‘untrue’. (Plato was the early and probably the founder example of the type, which still exists today, vide Richard Dawkins.) In fact, as Sidney recognised, the perceived gulf between fiction and non-fiction is more mirage than fact. Sidney wrote:

I think truly, that of all writers under the sun the poet is the least liar… for the poet, he nothing affirms, and therefore never lieth. For the poet never maketh any circles about your imagination, to conjure you to believe for true what he writes.

Isn’t that great?  'No circles about your imagination'. If you know that you are reading pure invention with no claims to be either history or fact, you don’t have to worry about belief. You are left free to apprehend the truth of the poet's imagination. Sidney goes on to point out that – surely? – only a fool would describe Aesop's fables as lies, or mistake a play for something 'real':

None so simple would say that Aesop lied in his tales of the beasts; for whoso thinks that Aesop writ it for actually true were well worthy to have his name catalogued among the beasts he writeth of. What child is there that, coming to a play, and seeing Thebes written in great letters upon an old door, doth believe that it is Thebes?

Aesop's fictions are not really about animals, they present succinct points about human morals and behaviour. To miss that would indeed be to miss the entire point.

Sidney’s argument is still valid today. On 5th June 2014 Richard Dawkins wrote in The Guardian: ‘I actually think there might be a positive benefit in fairy tales for a child's critical thinking ... Do frogs turn into princes? No they don't. But an ordinary fiction story could well be true ... So a child can learn from fairy stories how to judge plausibility.’ I find this argument unconvincing. Where Dawkins suggests that ‘an ordinary fiction story could well be true’, Sidney would say boldly that while every kind of fiction is of its nature untrue, it is the ‘ordinary fiction story’ which is the most likely to deceive: it might seem convincingly plausible while containing many factual errors.

Sidney goes on to claim that poetry (invention) teaches truth of another sort:

No learning is so good as that which teacheth and moveth to virtue, and none can better both teach and move thereto than Poetry.

By ‘virtue’, I think  Sidney means correct behaviour: courage, courtesy, gallantry, truthfulness. To this very day, there is an ongoing argument about what effect, if any, books, films, computer games and virtual reality have upon human behavior. Invented realities do affect us: the modern response is usually yes but not that much. Sidney takes fiction far more seriously. He argues that it can teach us nobility. He’s perfectly well aware that it can do the opposite – pornography was alive and kicking in Elizabethan pamphlets – but still defended it, writing: ‘granted that not only love but lust, but vanity, but scurrility, possesseth many leaves of the poets’ books; yet [say not] that Poetry abuseth man’s wit, but that man’s wit abuseth Poetry.’  Invention, Sidney acknowledges, is a two-edged blade, and it’s up to us how we use it. Further on in the Apologie he writes:

Poetry is the companion of the camps. I dare undertake, Orlando Furioso, or honest King Arthur, will never displease a soldier... Homer, a Greek, flourished before Greece flourished. And ... as by him their learned men took almost their first light of knowledge, so their active men received their first motions of courage ...  Alexander left his schoolmaster, living Aristotle, behind him, but took dead Homer with him ... [and] found he took more bravery of mind by the pattern of Achilles than by hearing the definition of fortitude.

If so, famously Philip Sidney learned the same lessons and put them into practice at his own death. There’s a story, repeated in the Notable Names Database, that while fighting for the Protestant cause in the Netherlands, ‘He owed his death to a quixotic impulse. Sir William Pelham happening to set out for the fight without greaves [the armour which protects the thigh] Sidney also cast off his leg-armour.’ He was struck by a bullet which smashed his thigh, and died twenty-five days later at Arnheim, 17th October 1586. Quixotic is the word. If it’s true, Sidney deliberately exposed himself to danger because honour – the chivalric, heroic code – would not permit him to venture into battle better-protected than his friend. What a waste, what folly. Yet what about his famous saintly deed, when he refused a cup of water in favour of a dying soldier?  Sidney's friend Fulke Greville, who wrote his 'Life', tells how,


Thirsty with excess of bleeding, he called for drink, which was presently brought him; but as he was putting the bottle to his mouth he saw a poor soldier carried along, who had eaten his last at the same feast, ghastly casting up his eyes at the bottle; which Sir Philip perceiving, took it from his head before he drank, and delivered it to the poor man with these words: "Thy necessity is yet greater than mine."

I now know this story may not be true. The writer and historian Kevin Pask explains that 'the interest of Greville's narrative is grounded at least as much in heroic as religious life-narrative' and claims that 'Greville most likely borrowed the story, which is mentioned nowhere else in the early accounts of Sidney's death, from Plutarch's Life of Alexander.' If I recall this story correctly, Alexander is marching his army through the desert. All are suffering from terrible thirst, but two of his soldiers find a tiny spring and bring him a little water cupped in a helmet. Since there is not enough for anyone else, Alexander refuses to drink it and heroically pours the water into the sand.

How interesting that Alexander appears again here, the very example Sidney cites of the active man inspired by poetry. And was Alexander a hero? Hardly in modern terms, though sure, he was brave.


It’s easy to forget that such far-off wars, for us still hung with the picture-book trappings of chivalry, were just as terrible as modern wars to the individuals concerned – and with far fewer resources for treating casualties. Sidney died horribly of gangrene. It wasn't his poetry or his martial skill, but a possibly fictional gesture of generous, yes, even heroic compassion which earned him his place as a storybook hero in the sort of Books for Boys which were read, along with Homer, by the generation which died at the Somme. This is a hero who fought and died for his country. This is how you should behave.

Fiction is powerful. Heroes are troubling.
Posted by Katherine Langrish at 16:14

Hey thank you so much for this great informative article!!! You have made my day. I will be reading some of his poetry later today as I already found some on the net. Again thank you so much and keep up the great work please.

Great post, Katherine! Nice to quote to the next idiot who sneers at me for loving science fiction and fantasy because "You're trying to escape from reality!" My usual response is that if I want "reality" I'll read a newspaper, but these days his comment that at least fiction doesn't pretend to be true is more relevant than ever. Newspapers are written to appeal to whoever is most likely to buy them, and there's no guarantee that you're reading the truth. "Alternative facts", eh?

That thought was certainly in my mind, Sue!

I adore his poem to the moon: With how slow steps, oh moon, thou climbst the sky.
I guess he was a young man, and young men do silly, impulsive things. As you say, what a waste.