A visit to Marseille and its stunning MuCEM, by Carol Drinkwater 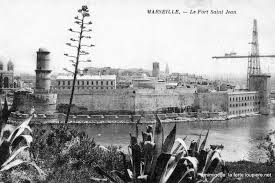 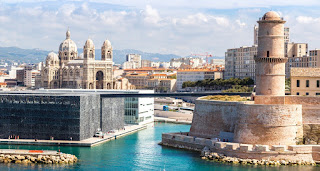 Although I live but an hour's drive from Marseille, France's principle Mediterranean port and second largest city, I do not visit it all that frequently. This month, however, I had the opportunity to spend an entire day there and I decided to dedicate most of that precious time to a first visit to MuCEM. If you have been then you will understand my excitement, if you haven't, it is a must.

What is MuCEM? It is the Museum of the Civilisations of Europe and the Mediterranean.  (Le Musée des Civilisations de l'Europe et de la Méditerranée). It was conceived in 2000 as part of the seven-billion-euro Euroméditerannée redevelopment of the city's dock areas.
It was built alongside and integrates several medieval stone structures. The complex is situated on the waterfront at the far extreme of the western arm of Marseille's huge and very splendid harbour.
MuCEM was opened on 7th June 2013 to celebrate Marseille as European Capital of Culture, 2013. It is the first museum anywhere to be dedicated to the culture of the Mediterranean.

There is so much that is remarkable about the place that it is hard to know where to begin to describe it. Its architectural brilliance is what struck me first and, of course, its location. I spent hours, literally hours, wandering around the old stone Fort St-Jean built in 1660 on a site previously occupied by the Knights of St John, hence its name. The fort guards the entrance to the Vieux Port and sits across the water from the cuboid museum, which is accessed by a high-flying footbridge.
I left the fort area mid-afternoon making my way by the footbridge to the museum. It was with some regret that I felt bound to move on because I had been told that with its westerly aspect, watching the sun set from the fort is a very memorable experience. 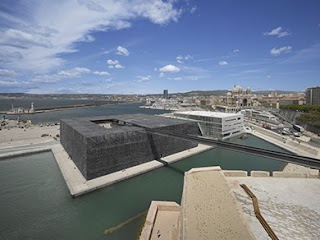 The high footbridge that transports from the old to the new.

The newly-constructed museum space, designed by the French architect Rudy Ricciotti (born in Algeria of Italian descent), is a giant cuboid encased in a lattice-work shell made from fibre-reinforced concrete. The concrete has been painted, rendered black. It gives the impression that the place has been wrapped in webbing or chain mail, or a giant mantilla. (Or perhaps it also hints at the idea of a hijab?) From the interior, the lattice-work creates a dappled effect (see photo below). It protects from the burning heat of the sun and yet the overall effect is dazzling. The sea and sun are omnipresent. The Mediterranean, veiled and at bay, still dominates. 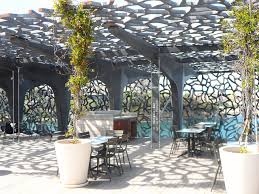 The space within the cuboid, laid out over several floors, is very fluid, interconnected in such a way as to create what feels like one enormous meandering space where exhibitions, restaurants, sitting areas, bars, a cinema, and a large and comprehensive bookshop co-exist. 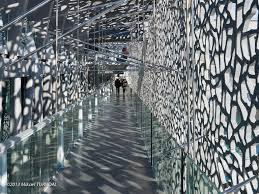 Walking one of the corridors within the museum.

Seating, (over at the fort there are felled tree trunks used as benches), have been placed everywhere to offer the opportunity to pause, sit, to stare out to sea at the busy shipping channels, the pleasure yachts tacking and rolling. At every moment there is the opportunity to reflect upon what a mighty seaport this city has been for close to three thousand years.
From this vantage point, it is easy to see the small island, part of the four-island Frioul archipelago, that houses Château d'If, made famous by Alexandre Dumas's novel, The Count of Monte Cristo. You can take a boat to the island and the château if you fancy the short ride.

Attention back within the museum. Glance about at all the visitors, eating together, strolling to and fro, visiting the temporary or permanent exhibitions. This place is for the community as much as the tourists and I think, ultimately, that is what I find so inspiring about it. Entrance was free the weekend I visited because I was fortunate to fall upon one of the days of Journées européennes du Patrimoine 2017. So many languages were being spoken all around me. It made me feel excited to be European, to be living alongside a city that celebrates diversity and its multiculturalism.

Marseille is a gritty city with many stains on its history. I felt that Ricciotti's design for MuCEM, its remarkable waterside location, is entirely in tune with the dichotomies which are Marseille. 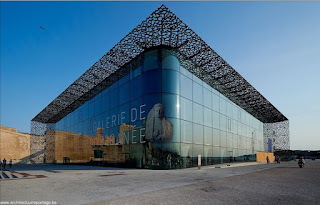 In all my travels for THE OLIVE ROUTE and THE OLIVE TREE, much of the history I was uncovering frequently re-routed me back to Marseille. Marseille, or Massalia as it was originally called, was founded as a trading post on the waterfront site, the Lacydon, a rocky cove, that later became the city's Vieux Port somewhere around 600 BC by Phocaeans who crossed the Mediterranean by sea from Phocaea, modern Foça, on the Aegean coast in what today is Turkey. Back then, that coast belonged to Greeks from Asia Minor. The Phocaeans are credited with bringing olive culture to France.

The trading post flourished, became a city-state and the preeminent polis in the Hellenic region of southern Gaul. It retained its independence throughout Roman rule until, siding with Julius Caesar, it lost its independence during the Siege of Massilia in 49 BC.

A splendid silver drachma with the name Massalia engraved on it.

It was an early seat of Christianity and retained its position as one of the most important maritime trading posts in the Western Roman Empire.

However, over the centuries to come, it went on to suffer sacking, a major loss of population through the Black Death. Its fortunes rebounded when, during the sixteenth-century, it hosted naval fleets belonging to the Franco-Ottoman alliance.

Over its long and sometimes troubled history, Marseille has been a renowned soap-producing location. It did business with the Venetians when Venice was controlling the eastern Mediterranean shipping routes. The soaps that were fabricated in Marseille were made, as they still are today, by the same methods as they have been for millennia in Syria, in the now devastated city of Aleppo. Like Aleppo, Marseille operated many factories and produced soaps that were sold to the textile industries. Marseille soaps, as in Aleppo and Nablus in Palestine, are olive oil based.

Throughout the Middle Ages, the land at the far end of the port was used to cultivate hemp for the manufacture of rope for the ships. This is the origin of the name of the city's principle street, the Canebière. 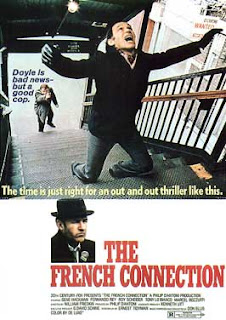 Do you remember the 1971 film, The French Connection? Marseille was portrayed as the drug capital of Europe. It was seedy, dirty, dangerous and corrupt. From before WWII, the city was riddled with heroin laboratories. The Italian Mafia had much of the city in its grip. The port was the ideal location for importing vast shipments of Turkish or Lebanese opium and exporting to the United Sates via Canada, billions of dollars worth of heroin. It was not until the 70s, forty years on, that the drug rings were dismantled. Still, the city was left with a very grubby image. Few tourists cared to venture there.

With its large Mahgrebian population, including huge influxes of Algerians after the Second World War, a great deal of cheap and not very attractive housing was constructed. The Algerian War of Independence, which cost the French so dearly, also brought about hatred towards France's fast-growing population of northern African residents. In 1972, The FN (Front National) party was founded. Jean-Marie Le Pen was its first leader and president. Marseille was one of the regions of France with the greatest support for this far-right nationalist movement.

Marseille's reputation as a city to visit was in shreds, but over this last half century, Marseille has worked hard to embrace its multiculturalism, to re-educate its citizens, to present itself as a melting pot with many positive aspects. To embrace its rich and muddled history.

Strolling about the city in the sunshine before and after my visit to MuCEM, I watched many of the local fishermen with their families setting up for a port-side feast. Some were in Provençal costume, some were talking in Provençal. A few were playing accordions, others grilling fresh fish caught overnight at the water's edge. Elsewhere, I drank mint tea in a cafe where customers were smoking narghile water pipes. I wandered through some of the old squares with lovely ochre-façaded buildings and coloured shutters, to the cobbled Arsenal district with its book and music shops, its lively cafés and clothes stores. I ate an Italian ice cream. I bought bricks of local soap. I booked us dinner for a fine bouillabaisse ( a Catalan-influenced dish) down at the waterfront. I glanced up towards the lovely neo-Byzantine basilica of Our Lady of the Guard. Perched on high, it overlooks, protects the entire sweep of the harbour. 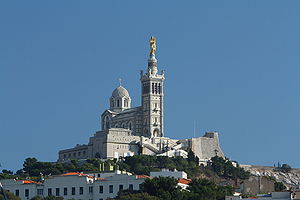 I wished I had longer, several days. There is much to see. Marseille has come a long, long way. 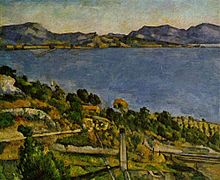