The other day a promoted Tweet landed in my Twitter feed. These unasked-for, supposedly targeted, advertisements are usually little more than an annoyance but this one drew my attention. 'For Gabrielle Chanel passion is a movement, an impulse, a breath,' it waffled, inviting me to click on play to watch the stylish little animation it was offering.

Now, I know this is a history site and so far this doesn't seem to be going anywhere historical, but bear with me, it will. I clicked on the arrow to be assaulted by the kind of aphoristic nonsense particular to fragrance launches, for this is what it was: the launch of Chanel's new parfum, Gabrielle.

Over clever graphics in chic monochrome a dulcet voice described the philosophy of Gabrielle Chanel (better known as Coco), delivering unmoored words: PASSION SIEZE DARE CREATE. 'Never do things by halves...embrace radical decisions...continue your journey without worrying about the past or posterity.'

It was the last point, suggesting carefree abdication of the past, that particularly drew my attention, given that Chanel's past was less than savoury. I clicked 'reply', hastily punching out into the Twittersphere: 'She was a Nazi sympathiser, hardly something to celebrate!'

Surely, I thought, the marketing gurus at Chanel, whoever they are, are aware that the woman they have chosen as their glossy icon was a collaborator during WW2, who swanned about the Ritz rubbing shoulders with various Nazi officers including Goerring and Goebbels and that her affair with the German officer Baron Hans Gunther von Dinklage is well documented. 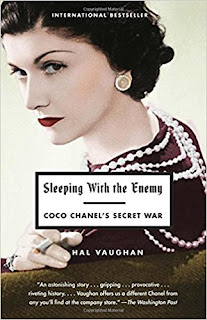 Indeed, if Hal Vaughan's meticulously researched 2012 biography, Sleeping with the Enemy: Coco Chanel's Secret War, is to be believed, the 'past' that is being ignored in the frivolity of this fragrance launch is worse than that. Vaughan is clear that Chanel was working for German military intelligence under the Abwehr label, Agent F-7124 and her code name was, somewhat wittily, Westminster – she had reputedly had an affair with the Duke of W.

Chanel, the company, is not alone in having links to murky wartime affairs. Most such organisations have changed beyond recognition and I'm not suggesting that driving a Volkswagen or shopping at Hugo Boss, or indeed Chanel is wrong. But what I take particular issue with is that this particular fashion behemoth would make the unforgivably crass error of holding up Chanel, the woman, as a role model. The fashion and beauty trade is necessarily superficial, but in this case a little depth and concern about the past would have been appropriate.

I, for one, will not be spraying myself with Gabrielle – the stench would be too much to bear.


Elizabeth Fremantle's latest novel The Girl in the Glass Tower, a Times Book of the Year 2016, is published by Penguin.
Posted by Liz Fremantle at 06:00

Well said - the stupidity of the beauty industry should no longer surprise but, particularly in the light of the current rise of Nazi and Fascist doctrines (I refuse to say alt-right, it sounds like something from a sat-nav) it is particularly distasteful. As is the ad itself with its undercurrents of violence. Presumably they selected the focus group very carefully.

Well said - have just been reading about her goings on in Anne Sebba's book about women in Paris during the war.

Very true: you show how ugly it is to be 'non-political.'