What does ‘Roman’ mean to you? by Alison Morton

Traditionally, Rome was founded in 753 BC. It grew into one of the largest empires in the ancient world with roughly 20% of the world’s population and an area of 6.5 million square kilometres at its height.

Plagued by internal instability and attacked by various migrating peoples, the western part of the empire broke up in the 5th century, giving way to the pre-mediaeval ‘Dark Ages’ of Europe. Only Italy, Dalmatia, an isolated part of northern France and parts of Mauretania remained under Roman or Roman shared rule. The last western emperor Romulus Augustulus, abdicated in AD 476, kneeling in the dirt to Odoacer, who styled himself King of Italy.

The western Roman state existed for 1229 years. Although development has moved at rocket speed in recent years, a simple comparison would be from AD 680 to AD 1909 – what a lot of history that covers!

Popular but not always accurate, depictions include plays like Shakespeare’s Julius Caesar, Coriolanus and Anthony and Cleopatra, feature films like ‘Ben-Hur’, ‘The Fall of the Roman Empire’, ‘The Robe’, ‘Gladiator’ and series such as ‘I, Claudius’ and HBO’s ‘Rome’. Visual depictions often stay in the public’s eye more firmly than images conjured up by books. However, we have every sort of fictional account from humorous with grim undertones such as Lindsey Davis’s Falco series to gritty campaigning and power grabs by inter alia Simon Scarrow, Ben Kane and Douglas Jackson.

But over more than a millennium, what really symbolises 'Roman' for us?
Do we go back to Romulus, founder and first king of Rome 753-717 BC?


Or do these pottery heads found on the Capitoline Hill in Rome and dating from 6th century BC tribal societies indicate the essential Romans?


Maybe the ‘great’ Marcus Furius Camillus c. 446 – 365 BC Roman general and statesman who defeated the Etruscans at Veii in 396 BC and expelled Brennus and his Gauls in 390 BC. But patrician to his core, he stoutly resisted granting the plebian representatives rights until 367 BC during a further war against the Gauls when he negotiated a compromise which united the two orders.


Perhaps the influential Cornelia Africana, the daughter of Scipio Africanus, mother of the political reforming brothers, the Gracchi. She died at age 90 in 100 BC, and was remembered by the Romans as an exemplar of womanly virtue by saying she needed no other jewels than her children.


Or this soldier from the Altar of Domitius Ahenobarbus, known as the “Census frieze”, circa 122 BC? 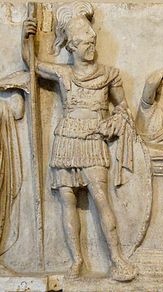 Maybe Augustus 63 BC – AD 14, the first Roman emperor, founder of the Julio-Claudians; power grabber and great reformer. He certainly ensured his image was disseminated throughout the Roman Empire during his lifetime which has left us plenty of evidence of his existence.

Or his influential and clever wife, Livia, or staunch friend Agrippa, the builder, general and administrator?

The Plinii, Elder and Younger, polymaths, scientists, narrators of the minutiae of Roman life?

The eruption of Vesuvius in AD 79 which has sent us so many poignant messages from Pompeii and Herculaneum into the present?


Or perhaps Eurysaces, an eccentric baker, who made a fortune out of the grain trade who was introduced to us by Mary Beard?

Does Claudia Severa’s birthday dinner invitation to Lepidina testified by the Vindolanda tablets resonate with us today as we email that invitation to some friends for next Saturday night?

Or perhaps Constantine the Great AD 272 – 337, the first emperor to convert to Christianity?

And there’s Flavius Stilichio, the half Vandal general who was magister utriusque militiae (commander-in-chief) of West Roman forces AD 395–408.


And near the end, Emperor Majorian AD 457-461 who was one of the last emperors to make a concerted effort to restore the Western Roman Empire. Possessing little more than Italy, Dalmatia, and some territory in northern Gaul, Majorian campaigned rigorously for three years against the Empire’s enemies.


Late Antiquity was a very different place from the days of Romulus and Remus, but people very much regarded themselves as Romans. Indeed some vestiges of Roman ruled lands such as the Domain of Soissons persisted almost until the end of the fifth century  And of course the Roman church, the systems of government, law and administration persisted for further centuries.

What does the word “Roman” conjure up for you?

Alison Morton's latest book in the Roma Nova thriller series, RETALIO, is available from the usual retailers as ebook or paperback.

To me, they mean all of the above, Alison as well as the dark side of colonialism, slavery, the cult of the Emperor, bread and circuses, and both the spread of Christianity as well as the persecution of Christians in the early centuries. Finally, there is the legacy of culture and language that remains with us.

I studied Latin to A level and did a further unit at university on translations so for me it's a) the writers, especially Catullus, whose poetry inspired me, Ovid,Horace,Virgil, Cicero and Julius Caesar (sad lack of female writers duly noted)and b) the Roman gods, myths and legends. More practical influences were Monty Python's 'What did the Romans ever do for us?' and visits to monuments like the Pont du Gard.

**Confession** I don't retain the concept of Roman Christians. It clashes with my obsession with gods/goddesses and legends.

This is a big subject, isn't it!

Catherine: Yes, Rome encompassed every dark side of the human story yes somehow seems to have remained attractive, fascinating and somehow admirable. People were never more prosperous as in Roman times until the Victorian age. Many of the Victorian 'achievements' such as public water supply and drains had been used in Rome as a matter of course. industrial scale farming and mining as well as complex trading and legal systems were standard. I'll have to stop before I write an essay!

Jean: Ah, Catullus, the most lyrical and the rudest poet ever! The myths and legends, the ideas of culture and the levels of literacy were impressive. As you say re religious persecution, the favour was returned by the vicious persecution of the pagan families in the later empire especially by Theodosius II and his fanatic religious policeman Ambrose of Milan.