The House of Beaufort by Mary Hoffman 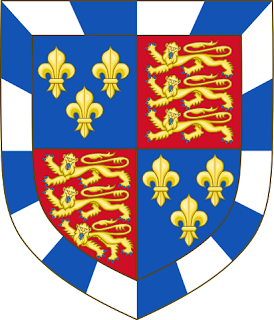 I can't remember when I first became interested in the Beauforts, the children conceived by Katherine Swynford by her lover, John of Gaunt, and later legitimised by their marriage.

Unlike many History Girls, I never read the novel "Katherine" by Anya Seton. It was published in 1954 and has remained popular ever since but somehow passed me by. (The only historical fiction I read before adulthood was the Regency romances of Georgette Heyer).

Perhaps it was the RSC's performances of Shakepeare's History Cycle, from Richard the Second to Richard the Third in Michael Boyd's exhilarating productions of a decade ago. We saw them as they came out, in Shakespeare's writing order and then plunged a terrifying amount of money on seeing all eight in their chronological, historical order in four days, named "The Glorious Moment," in Stratford in the spring of 2008. And there were many glorious moments in that long weekend at the Courtyard Theatre, from the astonishing appearances of Jonathan Slinger as both Richards, and Katy Stephens as both Joan of Arc and Margaret of Anjou, to John MacKay as the Dauphin, along with the rest of the French court in dazzling costumes on trapezes, while Geoffrey Streatfeild excelled on the ground as Henry the Fifth and Jonathan Slinger (again) popped up through a trapdoor as the Bastard of Orléans.

Thrilling stuff. But what of the Beauforts? Well, it all begins with John of Gaunt, the third son of Edward the Third. Which of us did not learn at school the "sceptred isle" speech from Richard the Second? I remember even singing it in the setting by Parry in school choral competitions.

But I didn't know then that the dying Duke of Lancaster, King Richard's uncle and father of the perplexingly named Bolingbroke, was the richest and most hated man in the England Shakespeare makes him praise so lyrically. The man whose most lavish home, the Savoy palace, was burned to the ground in the People's Revolt of 1371, the proud and arrogant lord who liked to be called king, by virtue of his second marriage, to Constance of Castile, the venal man whose sexual adventures might have caused him to die horribly of an STD and – mind-bogglingly – Chaucer's brother-in-law.

Finding out all this was to come but in was in another of the History plays that I first encountered my first Beaufort, the Bishop of Winchester, who later became a Cardinal. He is the one who has the huge speech about Salic law in Henry the Sixth, part one, justifying the English right to the French throne.

And Shakespeare dramatises the cardinal's feud with Henry the Fifth's brother, Humphrey, Duke of Gloucester, and his presiding over the trial of Joan of Arc in the next play.

This Beaufort was Henry, the second child of Katherine Swynford by John of Gaunt and brought up to go into the Church, like many second sons.

Shakespeare doesn't portray Katherine, or her daughter Joan. The only female Beaufort descendants we see on stage are – briefly –  Joan's daughter, Cecily Neville, Duchess of York, who was mother of Edward the Fourth and Richard the Third, and Anne Neville, Cecily's great-niece, who is so memorably seduced at the beginning of Richard the Third.

And yet, the more I researched this remarkable family, the more I became aware that it is the women who drive the story of the House of Beaufort, from Katherine Swynford to Margaret, the mother of Henry the Seventh. After all, Henry claimed the throne through his mother's line and his descent from John of Gaunt; without Margaret we'd have no House of Tudor.

Along comes Nathen Amin's The House of Beaufort: the Bastard Line that Captured the Crown (Amberley Publishing) a beautifully produced hardback that satisfying fills out the history of the women as well as the men who descended from John and Katherine's long-lasting relationship and provided the backbone of the house of Lancaster.

And yet, and yet ... Cecily Neville, Katherine and John's granddaughter, married Richard Duke of York, a possibility of uniting the houses of Lancaster and York long before Henry Tudor came along. It was not to be.

Amin reminds us of the entangled and complex relationships within the royal line of England.  John of Gaunt, Duke of Lancaster by virtue of his first marriage, to Blanche of Lancaster, who inherited her father's great wealth, was the third son of Edward the Third. The first was Edward the Black Prince who died before his father, leaving Richard the Second to inherit the throne when his grandfather died. The second was Lionel Duke of Clarence, who died without male heirs, but his daughter Philippa married Edmund Mortimer and their granddaughter Anne Mortimer married Richard, Earl of Cambridge. The fourth son of Edward the Third was Edmund, Duke of York and it was his second son that Anne Mortimer married.

So if you accept inheritance through the maternal line, as you must if you believe Henry Tudor had a legitimate claim to the throne, then the Yorks had the better case.

(If you find any of this confusing, I urge you to read John Julius Norwich's Shakespeare's Kings, which sorts it all out once and for all.)

These are the amazing "history girls" of the Beaufort family:

Born Katherine de Roet in Hainault, she came to England where her sister Philippa was lady in waiting to Blanche of Lancaster, John of Gaunt's first wife. Philippa married Geoffrey Chaucer, who wrote The Book of the Duchess, to celebrate Blanche, at the request of his friend and almost exact contemporary, John of Gaunt. Katherine married Sir Hugh Swynford and bore him at least three children. He died in 1371 and Katherine must have started her affair with John soon afterwards, since their first child John was born a year or two later.

By then Blanche had died of the plague and John had married Constance of Castile, by whom he had one daughter and a son who died in infancy. But in the course of that marriage he fathered John, Henry, Thomas and Joan on Katherine Swynford, who had been governess to two of his daughters by his first wife.

Not laudable behaviour on either side and the medieval equivalent of the tabloids had a field day with the scandalous story. But what was remarkable was that two years after after Constance had died, John married his mistress. She brought no fortune to the marriage or any dynastic advantage, unlike his first two wives, so one must conclude it was a love match.

Whatever you think of Katherine's morals, she was clearly a remarkable person with a strong hold over the richest lord and most powerful person in England after the king.

The children were all given the surname Beaufort, after a lost castle in France. After their parents married, Richard the Second declared them legitimate. Joan, like her three elder brothers, was cousin  to the king and there was clearly some contact between them.

When Bolingbroke deposed his cousin Richard, the Beauforts were now even closer kin to the throne, half-siblings to the new king. Like her mother, Joan married twice, first to  Robert Ferrers by whom she had two daughters before he died. Her second husband was Ralph, Earl of Westmorland, who had also been married before, He had twelve children by his first wife and went on to have fourteen more with Joan. (This is a story of fecundity; if Edward the Third and his wife Philippa hadn't had quite so many sons to war for the succession, history would have been very different).

Joan and Ralph made advantageous marriages for all their children, playing on their close relationship with the king. Their youngest child was Cecily Neville, famed for her beauty and nicknamed "the Rose of Raby." When Joan died she was buried with her mother in Lincoln Cathedral.

Married Richard, Duke of York, who so nearly became king and fathered two sons who did, Edward the Fourth and Richard the Third. Shakespeare portrays her as a strong matriarch, the Duchess of York, who rails against her youngest son as misshapen and evil.

She was a tenacious and fiercely loyal woman who fought for the rights of the house of York and believed she should have been queen. 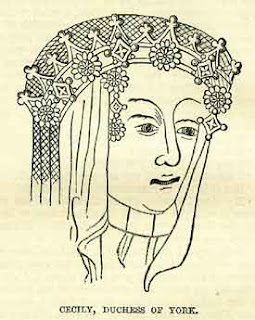 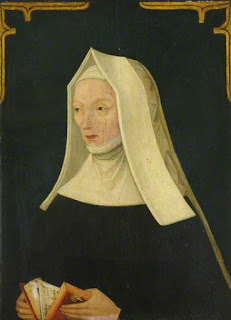 The granddaughter of John Beaufort and Edmund Tudor, Henry the Fifth's half-brother by his mother's second marriage. She gave birth to her only child, Henry, when she was only thirteen. Although Margaret married twice more, there were no more children and it is assumed that the difficult birth at such a young age damaged her physically. She was separated from her son for most of his childhood and youth, as the Wars of the Roses raged, but remained fanatically attached to her only child and devoted to the idea of his inheriting the throne.

This aspect of her was memorably portrayed by Amanda Hale in the television adaptation of Philippa Gregory's The White Queen, a somewhat fanciful re-imagination of what was known then as The Cousins' War.

Nathen Amin has done his research and filled in a lot of the gaps. No-one interested in the remarkable Beaufort line will want to be without it. 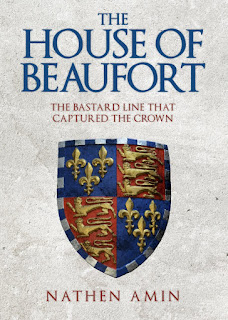 The House of Beaufort: the Bastard Line that Captured the Crown by Nathen Amin (Amberley Publishing 2017)
John of Gaunt by Anthony Goodman (Longman 1992)
Shakespeare's Kings by John Julius Norwich (Viking 1999)
A Pride of Bastards by Geoffrey Richardson (Baildon Books 2002)
Katherine Swynford: the Story of John of Gaunt and his Scandalous Duchess by Alison Weir (Jonathan Cape 2007)

At the weekend, we stayed in Lady Margaret Hall in Oxford, and I was intrigued to notice in the dining room a portrait of Lady Margaret Beaufort in the place of honour. LMH was only founded in, I think, the 19th century, and I wondered why it was named after Lady Margaret - you don't happen to know, do you? I've always felt interested in her since visiting Pembroke Castle, where there was a tableau that told the story of her giving birth at such a young age - she must have been so frightened.

Fascinating blog, Mary. I thoroughly enjoyed Anya Seton's "Katherine" in my teens, so it was good to be reminded of how she became "the mother of kings".

I have to agree with you that Edward III had way too many sons! You're right, history would have been very different, just as it would have been different, centuries before, if Henry I's son hadn't died along with so many other young aristocrats in the White Ship disaster. I am currently reading another John Julius Norwich book, Four Princes, my first. Goodness, he has a chatty style! But I'll check out that one and the one you recommend by Nathen Amin. There were some tough women in that time, weren't there?