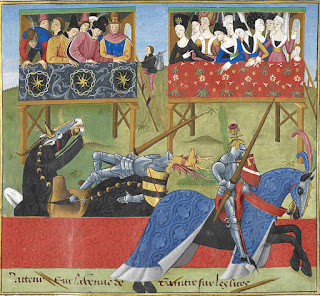 I've recently been re-reading the medieval satirical poem The Turnament of Totenham, (Tournament of Tottenham). It was written by an unknown author sometime before 1456 and is set in Tottenham which was, in the Middle Ages, a little village near London, though its country lanes are now city streets.

The poem tells the story of a tournament in which the men of the village, some of whom already have wives, compete for the hand of Tyb, the reeve’s daughter, after the potter, Perkyn, boasts that he is the only man worthy of her. To add to her charms, the lovely Tyb comes with a dowry of an old grey mare and a spotted sow. The men ride to the joust on field mares, with pots and buckets on their heads instead of helmets. The tournament quickly descends into a pitched battle and come nightfall, the women and wives have to take their bruised and crippled menfolk home on hurdles, cratch (fodder rack) and in wheelbarrows.

Academics continue to argue over the target of the humour in this poem. It’s been suggested that it could be depiction of a mock battle which might have been enacted by villagers during Shrovetide, a time of the year notorious for the performance of bawdy plays and songs full of sexual innuendo. Others have claimed that the poem was penned as warning to those participating in the increasing rowdy knights’ tournaments telling them not behave like peasants, or was it a warning to the lower classes not make fools of themselves by trying to ape their masters?
﻿
Whatever the aim of the poet, the interest for me is in the rich details of everyday day contained in some of the lines. The villagers rode to the tournament on their wooden saddles which could be piled all round with goods as high as the rider’s waist when he or she was going to market, which also helped prevent them falling off if the horse bolted. The poet has the villagers carrying winnowing baskets as shields, which in fact were used by the farm lads if pressed into battle. Their weapons were rakes, hoes and flails. Flails were used by the Cornish wool and tin smugglers in the Middle Ages to defend themselves against those sent to hunt them down, since a man who had years of practise using a flail on a farm could use it to disarm a man wielding a sword. And if the smugglers were caught with flails on the road they could not be accused of carrying weapons.

But one of the most telling lines for me, comes towards the end of the poem -

'All the wives of Tottenham come to see that sight,
With wyspes and kexis and ryschys their light,
To fetch home their husbands, that were them troth plight.'

There is so much history hidden in those three words wyspes, kexis and ryschys or wisps, kexes and rushes, for these were the poor man’s means of lighting. Wisps or wispies were made when extracting honey from the bee skeps. The warmed honey comb would be pressed through straw, and after the honey had dripped through, the straw, covered in melted wax, would be pressed into bundles and left to harden. These would be used as candles or tapers when bright light was needed, though they did not burn for long.

Kexis, kexes or kex refers to hollowed-stemmed plants of the umbelliferous family, such as hemlock, cow-parsley and chervil. The folk-name for cow-parsley in some parts of England is still keckies. The stems of these plants would be dried and stuffed with tow, the waste fibres of flax or hemp, to make lights. These would burn longer than wispies, but would be much smokier.

Ryschys or rushes, were either bulrushes with the heads soaked in wax or, more likely, rush candles. These were not easy to make, though children had to master the art early on, for a great many were needed especially during the winter months. Soft rushes, Juncus effusus, were cut in summer and plunged into water straightaway, so they didn’t shrink and bend. They then had to be peeled, leaving just one narrow rib of peel to support the pith. It took skill to do this evenly and leave the pith intact. The rushes were then left out for several days to bleach and absorb the night dew before finally being sun-dried. Finally came the eye-stinging process of dipping them in scummings, melted animal fat saved from cooking. Sometimes this could be mixed with melted wax if you had any to spare, which would make them burn longer and clearer. A rush light of around two and half feet long was reckoned to burn for an hour.

Another plant used to make these ‘rush candles’ was Common Mullein (verbascum). One of its old folk names is the Roman name Candelaria, because since ancient times it has been stripped of its leaves, and the resinous dried stalk dipped in tallow, and burned as lights or tapers. Hence its other names such as hedge-taper and Our Lady’s candle. 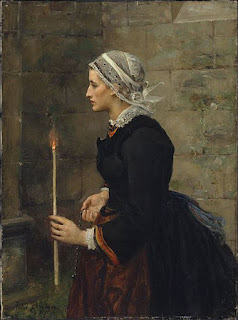 Satire or not, the poet paints a wonderful picture of some of the everyday objects and tools that would have been so familiar to the medieval audience, and leaves such a valuable insight for us.

By the way, if you don’t know the ending of the story in the poem, Perkyn the potter wins the tournament by being the only man left standing. He and Tyb spend the night together as result of which they find they are compatible and agree to marry or in other versions are declared by the poet to be married - an interesting allusion to the wide-spread custom of common-law marriages.

Guests are invited to a marriage feast, at which each fifth man is served with a cokenay. Some define this as a bad egg or a small egg, otherwise known as a cock’s egg. Misshapen or small eggs were said to be laid by cocks. It is also a vulgar pun, in that this term was also used for small or misshapen testicles or men believed to be impotent. 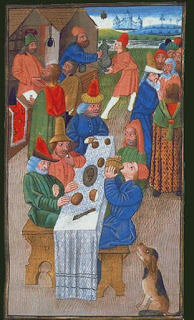 Ms Maitland, I do love your posts. This is fascinating, as always.

From a position of complete ignorance, I would plump for the aristocracy as the target of the poem, with perhaps a side-serving of the ever popular pastime of laughing at the funny poor who produce your wealth.

The details of the girl's dowry and the avarice of her suitors, the mayhem of the contest - it all seems too neat a mockery of the upper class jostling for power and property. Without that angle, would the poet have bothered? After all, everyone knows the peasants are laughable - why point it out at such length?

Thank you so much, Susan. I think you're right about the aristocracy being the target, a far more tempting one for any writer than the poor, which makes it all the more intriguing as to the identity of the poet.