THE RASPUTIN DAGGER by Theresa Breslin. Reviewed by Adèle Geras.

Theresa Breslin needs no introduction to the readers of this blog. She was one of the Founding History Girls and is well known as the winner of a Carnegie Medal and a writer of great distinction. She has never shied away from difficult topics, and has a deep interest in historical subjects. She's written about the First World War, the Spanish Inquisition, and about the divisions in her home city, Glasgow, in her wonderful novel THE DIVIDED CITY, which is about Catholic/Protestant divide as shown by characters'  loyalty to either Celtic or Rangers.

In THE RASPUTIN DAGGER, which was published last month, Theresa tackles a part of history which has entranced many: the end of the Romanov family, the death of the Mad Monk and the beginnings of the Bolshevik Revolution. This year marks the centenary of that event and this is the first novel I'm aware of that deals with this very thorny subject.

Nina and Stefan are our heroine and hero. The book manages to be many things at the same time: a love story, an education in Russian history, a tale threaded through with the folk tales Theresa loves and has also retold to great effect. There are thrills and surprises along the way, and the invented characters mingle with those taken from the historical record. Most importantly, we meet the Romanov family and what a fascinating collection of people they were! Rasputin, who had such power over the Tsarina and many others, is someone of whom one could definitely say: you couldn't make it up. The novel is a very good way to introduce young adults to these extraordinary people. 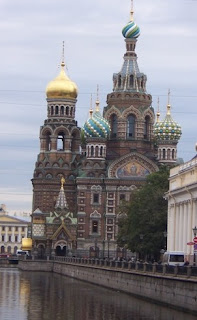 (The Church of the Spilled Blood)
All Photos: Theresa Breslin Books: ©Scarpa

Nina is forced to flee her home  in Siberia when her father dies. A horrible lawyer wants to marry her and also incidentally steal her inheritance.  She runs away, hiding among her possessions  a dagger studded with pearls and with a huge ruby set into the handle. 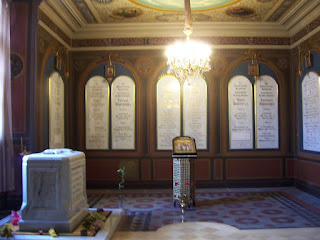 
Later, when she meets Rasputin, it turns out that he has a matching dagger. What is the connection between the two weapons? Is one blessed and one cursed? And why does the dagger belong to Nina? 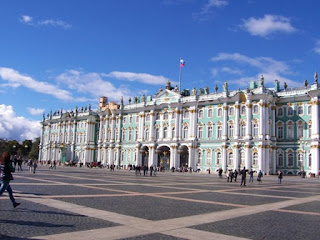 We find out the answers to this and other things along the way. The historical story of what happens to Rasputin and the Romanovs is known to many adults but in Breslin's account it's made more accessible and understandable.  The novel is also framed as a love story. The terrible fate that befell the Romanovs occurs, as it were, out of the frame, but it's clear what's going to happen to them and a postscript from the author tells us what happened next. 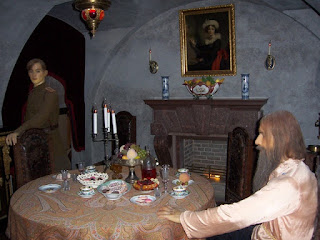 
Breslin is very skilled at showing day to day life, as lived in houses, streets, universities, hospitals and she does so mostly through the eyes of a heroine of singular charm and bravery. Nina is a very sympathetic character and we are rooting for her all the way through the book.

I hope very much that this novel will be read by many, not only in a 'this looks like a really good read' spirit but also in a classroom context where it would provide a wonderful stepping stone to further reading about the world-shattering events of 1917.

I've taken advantage of knowing Theresa personally to ask her a few questions which follow:

I've always loved history and am attracted to writing about it. It's such a great opportunity for adventure as young people lived in dangerous and daring times. When growing up our family home was full of books of Folk and Fairy Tales from many lands, which made me want to travel. I found Russian tales fascinating - with stories of deep forests and enormous snowy mountains and bears and wolves. Probably about five years ago I was aware that the centenary of the 1917 Revolution was approaching and, after the success of The Medici Seal and Remembrance, it seemed a natural progression to focus on Russia. And the mysterious monk, Rasputin, is a fascinating character. Then I found out about the actions of the women of the Bread Queues in St Petersburg. On International Women’s Day 1917, (quite newly created to be celebrated on 8th March, but in Russian Old Calendar in 1917 it was late February) they came on to the streets to protest about the lack of food and the continuing slaughter of World War One. Over the next few days they encouraged both female and male factory workers, and then others, to join them, thus bringing the city to a standstill. Many sections of the army, who’d been ordered to stop them by any means, refused to fire upon the crowds. This led directly to the abdication of the Tsar. This was the February Revolution, which is somewhat overlooked in favour of the more well-known October Revolution. By the summer of 1917 in Russia, women aged 20 and over had won the right to vote and stand for election – compare that with the UK! I felt strongly that this story must be told.
So, The Rasputin Dagger being published this centenary year of the Russian Revolutions is not a coincidence, no…

2) How much research do you do? And is it necessary for you to visit the actual places you're writing about?

A LOT of research. The librarian in me is very meticulous, but I also research around the subject to get an emotional feel for the times. It's not always possible, but I do try very hard to visit the places I write about. I managed to visit St Petersburg and Siberia too - both locations are beautiful and amazing.

3) Did you find your sympathies changing as you wrote this book? What I mean is: did you feel sorrier for the Romanovs at the end than you thought you would be when you started?

Yes, I think that is a fair comment. Essentially they were trapped in a golden cage - with no way out. Prince Harry has spoken about this recently re his own family situation. Tsar Nicholas II watched his grandfather, the liberal Tsar, Alexander III, die a most violently horrible death at the hands of an assassin which put Nicholas off continuing with reforms. Also the Russian Empire was so vast as to be almost ungovernable. And the Tsarina, who could not feel a twinge of sympathy for her? She gave birth (no epidurals then!) to daughter after daughter, until finally the fifth ‘essential male’ child arrived who would inherit the throne and carry on the line of the Romanovs. Then she finds out that her son has haemophilia, a debilitating and incurable condition. On a personal level this is an exceptionally painful discovery for any parent; on the level of the responsibilities of State, it was a catastrophe. I believe the Tsarina was constantly physically and mentally unwell. However…,  my emotions see-sawed. I was endlessly frustrated at the actions of the Imperial Family and angeredby their appalling ignorance, determined foolishness, and lack of empathy. Towards the close of the book I sympathised with them through the last years of their lives – drawn out days of suffering, which they bore with fortitude – ending in brutal murder.

4) Who do you hope will read this book?

Everybody and Anybody – all ages and not gender specific. My older historical novels are read by 12 year olds and over, with a significant adult readership.  In particular, Remembrance, my book about youth in WWI, - has an adult readership of about 50%.  Because The Rasputin Dagger covers war and revolution, passion and politics, a Storyteller, touches on Folk Tales and their meaning, with some mysticism thrown in, I’m hoping it will have wide-ranging appeal.

5) Can you say anything at all about what you're working on  next?

Mmmm.... it’s at that fragile little seedling stage where it needs to be cosseted. I’ll have to wait and see if it comes to anything..... 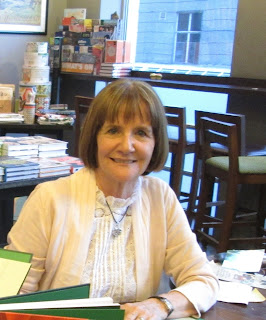 THERESA BRESLIN is the critically acclaimed Carnegie Medal winning author of over forty books for children & young adults whose work has appeared on stage, radio and TV, and is enjoyed worldwide in many languages. Her writing, which has won many awards, extends over a variety of genres and a wide range of ages: from picture books to longer novels with an adult following. Her historical novels include Remembrance a tale of youth in WWI: Prisoner of the Inquisition shortlisted for the Carnegie Medal and voted favourite book by the school pupil shadowing groups: and The Medici Seal which features Leonardo da Vinci.
Her latest novel is The Rasputin Dagger. Set one hundred years ago in St Petersburg during the stormy days of the Russian Revolutions, it tells of Nina and Stefan, two young adults caught up in the chaos of a city in revolt.

Yup, I want to read that one!