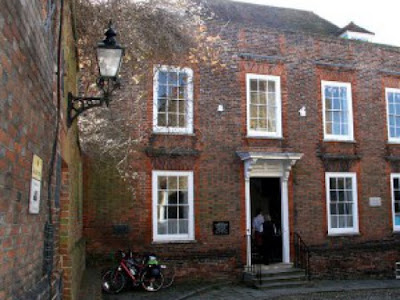 On a recent visit to Rye I was very excited to visit this beautiful early eighteenth century house. Henry James is one of my favourite novelists and he lived in Lamb House for most of the year from 1897, when he was 55, until just before his death in 1916. After years of living in London he began to find the city exhausting and fell in love with Rye: “ the little old, cobble-stoned, grass-grown, red-roofed town, on the summit of its mildly pyramidal hill.” He called the house his “hermitage,” and wrote in a letter to his old friend Oliver Wendell Holmes, “ Only Lamb House is mild; only Lamb house is sane; only Lamb House is true.” Far from feeling cut off from literary life James, who was sociable even when claiming to be a hermit, entertained many writers there, including Joseph Conrad, Rudyard Kipling, Edith Wharton, H.G. Wells, A.C.and E.F. Benson, Max Beerbohm, Hilaire Belloc, G.K. Chesterton, Stephen Crane, Ford Maddox Ford, Edmund Gosse and Hugh Walpole. 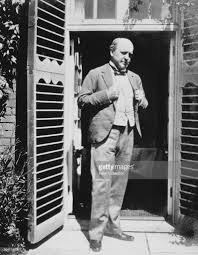 Here’s a rather faded photo of Henry James standing in the French window of the dining room, looking out at the garden he enjoyed so much. In summer he wrote - or rather dictated - in the little Garden House which stood at the top of West Street, at right angles to the main house. The Garden House was destroyed by a bomb in 1940 but the walled garden itself is still very attractive. The peace and charm of Lamb House were productive for James and while he lived there he wrote The Awkward Age, The Wings of a Dove, The Beast in the Jungle, The Ambassadors and The Golden Bowl. Colm Toibin has written a brilliant novel about Henry James, The Master, which vividly describes “the house where James wrote all his later masterpieces, the house where his old ghost, quiet and refined, and dedicated still perhaps to art at its most pure and life at its most complex, walks proudly now that his reputation as an artist continues to grow....” “ The imagination is a set of haunted, half-lit rooms....” (From an article Colm Toibin wrote in the Daily Telegraph in 2004).

The reference to haunting is very interesting. Years ago an old friend told me that when he visited James’s bedroom in Lamb House he felt possessed by a sense of loneliness and desolation which he believed to be the spirit of Henry James. He was sceptical about such things, as I would say I am, but I was certainly looking forward to visiting James’s bedroom and was disappointed to discover that the National Trust no longer allows this. You can only go to the downstairs rooms and the garden now. In a letter to Bay Emmet, the niece of his muse Minny Temple, Henry James wrote: “I feel your ghosts, all there, hovering tenderly & softly from room to room in poor little empty Lamb House now, & creaking gently on staircase & on old crooked floors.”

EF Benson, who lived in Lamb House after Henry James, wrote ghost stories as well as his better known Mapp and Lucia books. During the summer of 2014 Lamb House was used as the fictional "Mallards" for a BBC TV adaptation of E.F. Benson's Mapp and Lucia.

Joan Aiken, the author of a children’s book I love called The Wolves of Willoughby Chase, also lived in Rye and wrote a book called The Haunting of Lamb House.

Another author, Rumer Godden, lived in Lamb House from 1968 for five years. My mother, who grew up in India, adored her novels, which describe “ a world of nuns and sinners, ballet dancers and one-legged soldiers, foolish fathers and knife-sharp daughters, obese hoteliers and wizened Indian nannies as thin and dried up as liquorice root - the British, the Indian and the Eurasian in the middle.” Three of her novels, Black Narcissus, The Greengage Summer and The River, were made into successful films. When she lived in Lamb House she claimed to hear the voices of Miles and Flora, the children in Henry James’s Turn of the Screw, when she was writing.  Here she is with one of her beloved pekineses.

Haunted or not, a visit to Lamb House is a rich and memorable experience. It’s open to visitors two days a week from April to October. 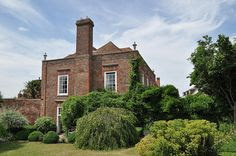 I don't thin this has much to do with Henry James. Was it because I mentioned ghosts?

Good blog. I went to Lamb House looking for Benson, Mapp and Lucia - and found them. So sad that the garden room was destroyed. I also was introduced to Rumer Godden's work, thanks to my visit, and was really glad. Rye is altogether fascinating and enjoyable.

Sorry, Miranda; we keep getting this Spam - deleted now.