Another in my occasional series about books from the past.

The New Illustrated Universal Reference Book is neither new nor of much practical use as a reference book in 2017.  It takes up too much space on my shelf. It’s cheaply mass-produced and worth nothing. But I won’t be throwing it out because it’s one of the few things I have which belonged to my grandfather. 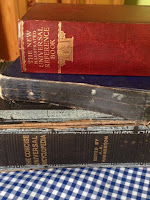 Granda died in 1978 when I was nine. I was close to him, but my memories  are piecemeal, mostly involving Fox’s Glacier Mints and evening walks around red-brick streets where we used to stand like the Bisto kids and breathe in the milky smell from the Co-operative Dairy and then the much nicer aroma of baking bread at the neighbouring bakery. He called sweets ‘ju-jubes’ and umbrellas ‘gamps’.

He was bright, with a thirst for knowledge, but, as the oldest son, he had left school at fourteen to be the breadwinner. He worked in a shoe shop, studying at night school to be a chiropodist, which business he ran from his terraced house. He was a lay preacher in strange mission halls and believed in the literal truth of the bible. Had he lived until I grew up, we would have argued bitterly. 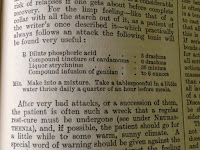 But if we couldn’t share our religious beliefs, we would have bonded over our love for information. He’s one of the people who made me a History Girl. His bookshelves were crammed with Dickens and Reader’s Digest and an array of what I suppose were the self-help books of their day, 1920s and 30s editions of Home Lawyer, Home Doctor, Enquire Within (Upon Everything), The Book Of Etiquette, Home Nursing and of course The New Illustrated Universal Reference Book. As a child, already in love with anything old-fashioned, I pored over the tiny print and drank in their facts, out-of-date and useless as they might have been. (Today, as I watch University Challenge with my mother, she often says, ‘How did you know that?’ and I realise it’s from one of Granda's books,  and not the benefits of twenty-one years of fulltime education.)

The New Illustrated Universal Reference Book is a jewel. It speaks to me of more than nostalgia. It’s a leftover from a world where knowledge wasn’t at the click of a mouse, but at the turn of a page. Where you had to pay for the doctor and thus might want to consult the Home Doctor section first; where you didn’t call in an expert to lag the boiler or wire the house, but consulted the Home Maintenance. One of the most interesting sections is the Home Gallery of notable paintings from the great art galleries of the world, pictures that the aspiring working classes of Belfast would have had little chance to see in real life. 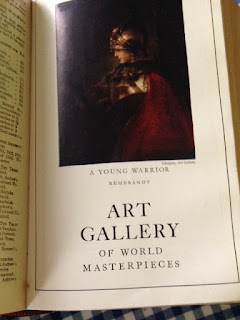 In the Household Pets section, there is a great deal about keeping chickens and rabbits (for eggs, meat and fur) and even as a child I knew the ‘popular’ dog breeds were no longer fashionable. I had only ever seen a Sealyham in the pages of Enid Blyton. 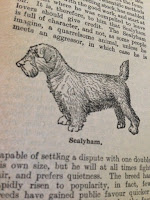 When did Granda buy this book? I thought at first it might have been a wedding present, when he set up home with my granny in the early 1940s, but it predates that. Like many books printed between the wars, it has no date – but I did some detective work in its pages, especially the Notable Biographies. It mentions treating diabetes with insulin, so it is post-1922. George V was king, so it was pre-1936; and there is no mention of Adolf Hitler as Chancellor of Germany, so it was pre-1933. However, it mentioned a death in 1931, so my not-terribly-brilliant deduction is that this edition dates from 1932, when Granda was a young man, studying at nightschool, and eager, as later his granddaughter would be, for all kinds of knowledge.

My gran was a widow from 1978 until her death in 2004, and she maintained a touching faith in the wisdom of her husband’s books, much to the scorn of my father. When she died, I rescued them. When I die, there will be nobody to reprieve them, but in the meantime I’ll keep reading and learning and remembering.

I salute your grandfather - thanks for this, Sheena!

I love and treasure these old books and what I find so moving is that men like your grandfather spent hard-earned money on them at a time when there wasn't much to spare, which shows how much they valued knowledge and reading. Thank you for sharing this.

My mother was from Dublin, and used many of the same terms as your grandfather - jelly babies were ju-Jubes, umbrellas occasionally gamps, so perhaps they are Irish expressions. I haven't heard these terms since she died, so this post was nostalgic for me too. It also makes me feel a bit old - I also remember Sealyham terriers!

I have such admiration for people like your grandfather, searching out any information they could, often after long working days: men who had had to leave school as early as possible but who had a great respect for study and learning.

We have a set of Engineering Manuals that my husband's father used to teach himself new skills after he came over from Ireland. How such books arrived is often a puzzle - did they come from a wealthier professional mentor or were they bought on an early subscription scheme for a precious shilling or so a week?

I sometimes wonder if such books were bought for sons who didn't return from wars or who didn't survive long afterwards.

My grandfather, who taught adult ed classes as well as teaching engineering in Bristol, used to quote Gray about the flowers that are born to blush unseen... But this kind of book, as you say, is not just a curiosity (and a gift to anyone writing about the period) but evidence of the hunger for knowledge of uneducated but intelligent people. Thanks.

Thanks for all these lovely comments -- I have just returned from holiday to read them. Yes, the books are a wonderful resource and maybe it's not a coincidence that between the wars is exactly the period I like to write about.