Comfort Me With Apples - Katherine Langrish 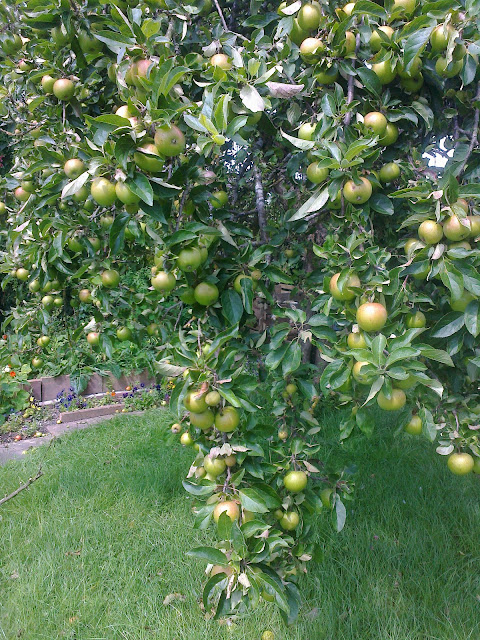 It’s September, and our apple tree has been so laden with fruit this year that branches have actually cracked and broken off under the weight, as though taking Keats’ lines from Ode to Autumn –

far too literally. The lawn is now almost ankle deep in windfalls…

What is it about apples? Why are they so evocative? Why was the fruit of the Tree of the Knowledge of Good and Evil – not actually named in the Bible – assumed to be an apple? Why did the Firebird, in Russian folklore, steal golden apples from the garden of the Czar? Why did golden apples of immortality grow in the Garden of the Hesperides, why was the Norse goddess Idun the keeper of golden apples which preserved the youth of the gods? Why was the Apple of Discord – with its inscription To the Fairest – an apple, and why were three golden apples so irresistible to Atalanta that she paused to pick them up and lost her race? (Mind you, that dress wouldn't help.) 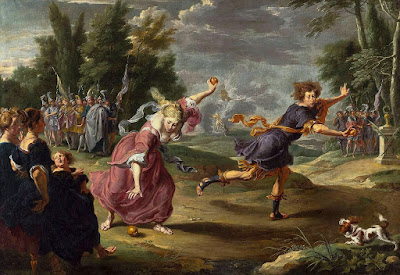 The apple as the fruit of immortality, or perhaps equally of death, appears as a symbol in Celtic mythology too.  Heralds from the Land of Youth might bear a silver apple branch, with silver blossom and golden fruit, whose tinkling music lulled the hearers to sleep – perhaps to everlasting sleep…  And Arthur, after his final battle, went to the island of Avalon, the island of apples, to be healed of his mortal wound. Then of course there’s the apple given by the wicked Queen to Snow-White, one bite of which sends the little princess into a death-like sleep.

Apples are tokens of love and promises of eternity. In Yeat’s ‘The Song of Wandering Aengus’, the lovelorn Aengus seeks forever the beautiful girl from the hazel wood.

Though I am old with wandering
Through hollow lands and hilly lands
I find out where she has gone,
And kiss her lips and take her hands;
And walk among long dappled grass
And pluck till time and times are done,
The silver apples of the moon,
The golden apples of the sun.

But such an eternity is probably also the land beyond death. 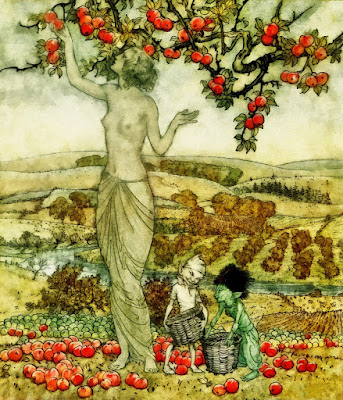 Where do apples even come from, why are they so ubiquitous?  Why, even today, are so many varieties available - even in supermarkets, usually the home of homogeneity? I went into our local Sainsburies the other day and counted eleven different named varieties of apple all on sale at once:  Empire, Royal Gala, Red Delicious, Golden Delicious, Cox’s Orange Pippin, Russets, Granny Smiths, Pink Ladies, Jazz, Braeburns and Bramleys. By contrast, there were only four named varieties of pears, and everything else was generic – bananas, strawberries, oranges, etc.

Apples are related to roses, I’m delighted to tell you.  According to a rather lovely book called ‘Apples: the story of the fruit of temptation’, by Frank Browning (Penguin 1998):

‘In the beginning there were roses.  Small flowers of five white petals opened on low, thorny stems, scattered across the earth in the pastures of the dinosaurs, about eighty million years ago. …These bitter-fruited bushes, among the first flowering plants on earth, emerged as the vast Rosaceae family and from them came most of the fruits human beings eat today: apples, pears, plums, quinces, even peaches, cherries, strawberries, raspberries and blackberries.

‘The apple [paleobotanists believe]… was the unlikely child of an extra-conjugal affair between a primitive plum from the rose family and a wayward flower with white and yellow blossoms of the Spirea family, called meadowsweet.’

Isn’t that wonderful? Apples as we know them today developed in Europe and Asia.  The Pharoahs grew them. The Greeks and Romans grew them. And they keep. You can store apples overwinter, eat them months after you’ve picked them: fresh fruit in hard cold weather when there’s nothing growing outside. So perhaps you would think of them as life-giving, immortal fruit. They smell fragrant. They feel good too: hard-fleshed, smooth, a cool weight in the hand. And all was for an appil
An appil that he toke
As clerkes finden
Written in her boke.

It ends on the mischievously subversive thought that if Adam had not eaten the apple, Our Lady would never have become the Heavenly Queen:

Blessed be the time
That appil take was!
Therefore we maun singen:
Deo gratias.

Here is a poem by John Drinkwater (surely the most poetically-named poet ever!) which captures some of those mystical coincidences of apples, eternity, sleep, moonlight, magic and death.

At the top of the house the apples are laid in rows,
And the skylight lets the moonlight in, and those
Apples are deep-sea apples of green.  There goes
A cloud on the moon in the autumn night.

A mouse in the wainscot scratches, and scratches, and then
There is no sound at the top of the house of men
Or mice; and the cloud is blown, and the moon again
Dapples the apples with deep-sea light.

They are lying in rows there, under the gloomy beams
On the sagging floor; they gather the silver streams
Out of the moon, those moonlit apples of dreams
And quiet is the steep stair under.

In the corridors under there is nothing but sleep.
And stiller than ever on orchard boughs they keep
Tryst with the moon, and deep is the silence, deep
On moon-washed apples of wonder.

Apples a cross between roses and meadow-sweet? No wonder I like them. Cox's Orange Pippin for me, or Braeburn.

Wonderful! I had no idea apples belonged to the rose family.