"In one of the planets that revolve around the star known by the name of Sirius, was a certain young gentleman of promising parts, whom I had the honour to be acquainted with, in this his last voyage to our little ant-hill..."

Thus begins Voltaire's scifi romp Micromegas, published in 1752.  You can read the whole story in its English translation from the eminently addictive Public Domain Review here. A treat for the mathematicians and philosophers among you, it's also a quirky pleasure for those of us who are neither.  I loved the great man's flamboyant comparisons, such as when one character makes a derisive, but mistaken, first judgement of Saturnians, "just as an Italian fidler laughs at the music of Lully, at his first arrival in Paris."  When Micromegas and his new friend, the Saturnian philosopher, decide to go on a jaunt through the solar system, the philosopher's girlfriend berates him - "our five moons are not so inconstant nor our ring so changeable as thee!" - and bustles off to find herself a new beau.  When the rambling aliens reach Earth, their enormous size (did I mention that Micromegas is 34 kilometres tall? while the Saturnian dwarf is only a mere 12 fathoms in stature, so that when they walked together it was "like a very little rough spaniel dodging after a Captain of the Prussian grenadiers") makes them wonder if there is any intelligent life to be found, so what do they do?  Coming across a, to them, minuscule boatload of human philosophers returning from a trip to the Arctic, they create a hearing tube out of their fingernail clippings to catch their tiny voices!

Great literature?  Of course not.  But a guy with a big brain having some fun?  Just look at that smile! 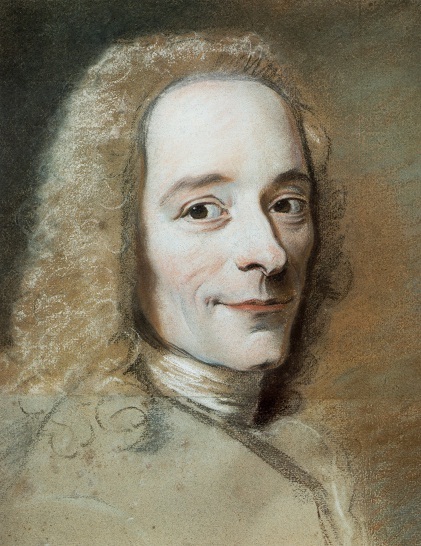 
P.S.  On no level would I compare myself to Voltaire, but my little ears pricked up when he wrote of his character being "a wonderful adept in the laws of gravitation, together with the whole force of attraction and repulsion, and made such reasonable use of his knowledge, that sometimes, by the help of a sunbeam, and sometimes by the convenience of a comet ... glided from sphere to sphere, as a bird hops from one bough to another."   Not a million miles from the way my own comet-riding Drivers manipulate their meteor herds in Walking Mountain.  Me and Voltaire - techno-babble buddies!

I've just read Walking Mountain, Joan and congratulations - it's a great read. Inventive, funny, sad and just fizzing with ideas. I did miss Professor Hurple - but then, I always shall. Books should have more ferret professors in them.

Enjoyed the blog. At one point, I thought Voltaire was going to burst into a chorus of Idle's, 'Let's hope that there's intelligent life somewhere out in space/ Because there's &%£* of it down here on Earth.' An observation that becomes more true with every passing hour.

5am. - Best wishes from Sleepless in Oldbury

I had no idea Voltaire was such fun! Thanks, Joan.

Yes, Sue Purkiss - a complete surprise to me too! And thank you, Sue Price, for kind words - and here's hoping your bad night means tonight you will sleep really well!