My last few posts have been about plant hunters. This is not unconnected with the fact that I have a children's book about plant hunters coming out at the end of the month - it's called Jack Fortune and the Search for the Hidden Valley, and you can find out more about it here.

But this month, I want to write about someone who also travelled the world searching for exotic new plants - but in order to paint them, rather than to collect them.


She was called Marianne North, and what she did would be remarkable if she had been doing it today - but she did it in the Victorian Age, which makes her even more extraordinary. The conventional image of Victorian women is that they sat at home looking demure, painting water colours and occasionally swooning on a sofa. But they certainly weren't all like that. There were some women who not only broke the mould but utterly smashed it - by climbing the Alps, by writing great novels - and by exploring dangerous corners of the world: women such as Lady Hester Stanhope, Gertrude Bell and Isabella Bird.

Marianne North belongs in their company. She was born in 1830 into a comfortably well-off (and well-bred) family - her father was the Liberal MP for Hastings. Her first passion was for singing, but with a background like hers, a career in music wasn't an option. So then she turned to flower painting. Her sisters married, but Marianne thought marriage was a terrible idea, which turned women into 'a sort of upper servant', and she avoided it. Instead, when her mother died in 1855, she took to travelling with her father, who was also interested in botany. Then when he died some 15 years later, she, at the age of 40, determined to continue her travels, exploring far-flung corners of the world and painting the plants and flowers she found there. She usually travelled alone, finding companions a distraction and an annoyance, and she lived simply - it wasn't a case, obviously, of hopping on a plane and staying in a nice hotel: travelling was difficult, but she did it anyway.


She wasn't formally trained, so maybe this is why her paintings are so unlike conventional botanical illustrations, in which the plant is shown against a white background. Marianne shows her flowers in context, where they grew - though she clearly took some liberties in order to show a beautiful view or an interesting insect: she didn't simply paint what she saw. Also, she didn't use water colours, she used oils, so her paintings are dense with brilliant colour - full of drama and absolutely wonderful.

In 1879 she offered her paintings to Sir Joseph Hooker, the Director of Kew Gardens. She designed a special building for them, and decreed how they were to be hung: close together, and grouped according to geographical area. However, she lost one fight. She wanted visitors to be served tea or coffee (so sensible!) but Sir Joseph huffed and puffed and said he was running a scientific institution, not a cafe. But she had the last word - she painted a tea plant and a coffee plant above the entrance.


I think I first heard about Marianne North when I went to Kew Gardens when I was researching Jack Fortune, though for some reason I didn't go to the gallery then - I probably didn't know about her till I'd been to the shop, where I bought a pack of reproductions of her paintings. I was enchanted by their boldness and brilliance, and one of them showed a view of the Himalayas through a framework of foliage, which was in my mind as I wrote about my characters' first sighting of the mountain which plays a pivotal part in the book:

Then, between two houses, Jack saw something that stopped him in his tracks. In the distance he could see immense mountains with snow glistening on their peaks. “Look, Uncle!” he breathed.

His uncle stood still. He didn’t say a word, and Jack glanced at him. He was gazing at the distant peaks with a look of the most desperate longing on his face. Jack suddenly saw just how much his uncle wanted – no, needed – to reach them. On impulse, he touched his arm, and said seriously, “It’ll be all right, Uncle Edmund. We will get there. I promise you we will.”

His uncle looked surprised. Then he smiled sadly. “I hope so, Jack,” he said. “Oh, I do hope so!” 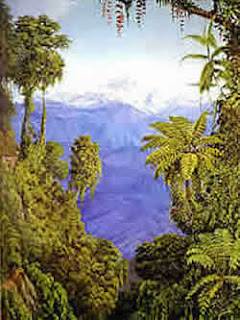 I went to look at her work some years ago. It was a dull winter day and those vibrant paintings were as heartening as seeing the orchid displays in the Kew greenhouses. I do agree that the stories of female travellers and of plant hunting are truly inspiring and exciting. Thanks for talking about Marianne. The book sounds great!

Thank you, Leslie! As I was writing this, I looked back at your post about plant-hunting in China, and thought the points you raised there were very important - the plant hunters were great adventurers, but there was a dark side... http://the-history-girls.blogspot.co.uk/2016/01/victorian-plant-hunters-their-legacy-in.html

I only found out about Marianne North really recently when there was a BBC 4 programme about her - love her story, love her paintings, would love to see her building at Kew! Thanks for posting about her! (And can't wait for Jack!)

As a small girl I got taken to London, we saw the planetarium (which was magical) ate at a MacDonalds (very new and cheaper than most other places) and got to wander round Kew. My Father was disabled so wander wasn't a thing I was allowed to do much, we parked by the side gate and went in. My Mum and brother set off for the pagoda (my Mum's favorite thing) while my Dad sat on a bench not far into the gardens and just beyond him was a building set back a bit and half hidden in greenery.
'Off you go' was all he said and aged about 7 or 8, I wandered into paradise! The pictures were everywhere, all smushed up against each other, with labels of continents which seemed so far away to me then. Colour, life, and wanders kept me there for ages, my Mum came looking for me and commented 'umm nice but we need to go now'. Pulling my body out but not my mind, I spent the next few years trying to paint and catch the colour, of course being young I only had those old style plastic colour palettes that came cheap and washed out. Despite many years passing as a student in London the only thing I bought every year was an annual ticket to Kew, I revised in the shade, studied on the grass and dreamed in the gallery! Leaving London was like being called away again, I have been back but the family in London are mostly on the opposite side of the city, but I plan to go again, and again :-)

How wonderful, Ruan! I hope someone from Kew reads this...

I like the bit about the tea plant and the coffee plant! She sounds like a remarkable woman, a botanist in her own right, not just an artist. She would have to understand how it all worked. Lucky for her she was middle class and had the money to indulge her passion - if she had been the daughter of a sweeper or a factory worker, she would never have been able to do this. I assume her father left her an income?

Wonderful article! It's so lovely to see that Marianne North is being acknowledged for her extraordinary life and work. My company, Creative Force, is delivering a project in Hastings about Marianne North. Next week, w/b 21st May 2018, we are working in the Sacred Heart Catholic Primary School on the Old London Road. It sits next to the house Marianne North was born in and the school sits in what used to be her gardens. The children are very excited as we are taking a fabulous artist in to make art with every child in the school and they will be doing some exploring too, in the grouns of their school which was, of course, Marianne's garden. In year groups they are covering different countries. Each piece or art will be framed and put on exhibition in their school hall in the same fashion, according to country, as Marianne's work in Kew. The project is rather more extensive than that and will continue for a few months with the aim of raising the profile of this amazing woman in Hastings, her home town. Our 'Exploring Marianne North' web site is soon to be published. Do take a look. It woudl be great if you could also like' the Exploring Marianne North Facebook page where we'll be keeping people up to date with our programme of work.