Why Historians are Hoarders by Sarah Gristwood


Blame it on too many women’s mags, but I started sorting out the other day. Not before time - the piles of papers had reached the point where we burrowed between them like tunnellng moles. But that doesn’t mean, as I threw anything towards the dustbin bags, that I didn’t feel a little guilty. Some of those papers had been there longer than I had. Some were there before I was born, actually.

In one chest of drawers, they went in layers, like the strata of rock they taught us in geology. In others, previous attempts to sort (or simply to find something for the taxman!) have resulted in an earthquake-like overthrow, so that my father-in-law’s World War II permission to travel is in among a stack of 1980s press releases. 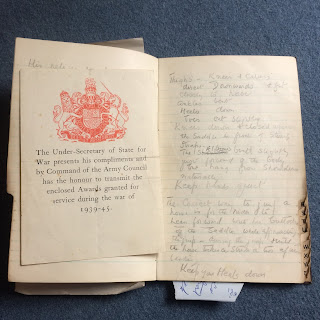 A backstage pass to join Bruce Willis’ band in Berlin, some time in the 1990s. A shooting script for Last Tango in Paris. A letter, dating back to the Fifties, from the then head of an Oxford college, pouring out his affection for my husband’s mother. A handful of share certificates, a thousand old German marks . . . And an enormous quantity of sheer junk, naturally.

The point is, how to distinguish? Fashionable (essential!) though it might be to minimalise, how can you really be sure of what will and won’t be valuable some day? And by valuable, I don’t mean the German marks, or the share certificates - I mean something that makes me feel I’m touching history. Even if it is only my own history.

Those press releases can go, surely? Or the letter from a press officer making arrangements for me to travel to an interview, and giving details of a flight that landed several decades ago? Except . . . Don’t I want to remember that once (before I left journalism for the ultimately more rewarding, but certainly less glamorous, world of Tudor history) I used to jet around the world interviewing Hollywood celebrities? That ladies-only lunch with Sharon Stone at the Hotel du Cap, outside Cannes? That LA lunch with Clint Eastwood, that flight back from a film location in Ireland, with Anthony Hopkins giving me life advice I remember to this day?

OK, so maybe that remembering is the point? Maybe I don’t need the paper to remind me? But somehow there’s a need almost to prove my case - as if someone else might be interested, some day.

Many years ago I wrote a book about women’s diaries, and one of the questions that came up then was why so many of us, ordinary people, feel impelled to leave a record of ourselves for posterity. I remember one diarist declaring openly that it was in case, one day, someone wanted to write her biography.

Most of us can’t flatter ourselves with that possibility - but all the same I was aware that, researching the subjects of biographies I’ve written, I’d have been ecstatic to come across hoards of the kind I was about to throw away.

It doesn’t, after all, have to be the person themselves who is so notable, to whet a historian’s appetite in future years. Sometimes ordinary people find themselves acting extraordinarily. The papers in our flat, transported in their crates from my husband’s old home, and simply dumped unsorted in a boxroom, have already helped him write a book, Family Secrets, about a murder in his family. Sometimes they are simply swept up in an extraordinary event. That wartime ‘permission to travel’ - the card that came with a WWII medal - carry with them the whiff of a whole world turned upside down, of courage and of tragedy.

But what about the souvenirs of more mundane occasions? What about the playbill from the 1950s, featuring my husband - as ‘A Gaoler - in a university production of a Shakespeare comedy? (It’s lying on top of a season’s programme for the Guardian cricket club, and a pair of handcuffs. Handcuffs. I like to think they were sent to us as a publicity gimmick for some movie.) 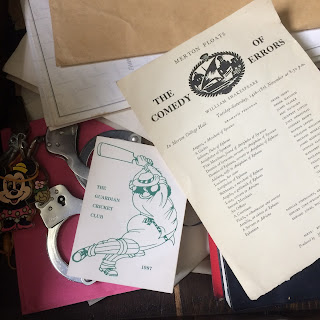 If, perish the thought, I’d had done amateur dramatics in my own youth in the Eighties, I’d have no illusions that I was keeping that flyer from anything but pure vanity. But this, older, one feels like an artefact, a message from a vanished era. Even the yellowing paper seems to have something to say.
So what - does junk become valuable after x many years, and if so, how many? Does someone ring a bell and the past becomes history? It’s a question for Antiques Roadshow, maybe. But meanwhile, you know what, I think I’ll stick to throwing away old make-up bottles. That’s safe - surely?

Our thanks to Sarah for this "anytime" post. Celia Rees will be back soon. 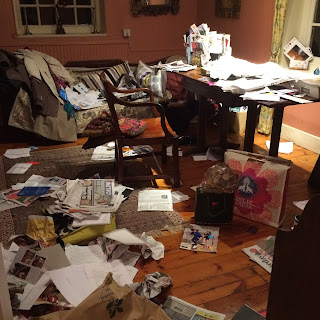 Delightful--I too have many thoughts about the saved memorabilia of my own little life...but not for anything in particular, just that it all got too heavy to do the work after seventy (I am)...I've gleaned and continue to cull, but much is saved despite witnessing the last stop for those without family and or live friends, those whose brilliant lives never made it into the history books (some do), those who don't own but just rent their abodes (and grateful to have one in this high priced world run wild and thoughtless...the big 'dumpster' I've seen outside the building full of the detritus of folks I once knew as neighbors, some of whom I loved. But, there's a great consolation knowing that once I'm dust, I won't care a bit :-->

As a pre teen I decided to keep the radio times and tv times each week, I would slide the old one out and pop it upstairs to my room on the quiet. I would sort them out every month and store them in a giant cheat of drawers in my bed room. I had somewhere in the area of three years worth when disaster struck, the end wall of our home had cracks in it, the wall was starting to bow and twist and my parents were starting to worry! a hunt of the house found 12 years worth of catalogues my mum had been 'saving' and had put in the far end of the loft, this led to a hunt of the whole house as the structure was not coping with weight in strange places. no one rooms was safe, but my brother had nothing more than dirty dishes and an old eraser collection, my mother lost her rather large and heavy catalogue collection, as well as a few other things which she had put away since before she married and brought to the house when they moved in! parents bed room had the gun safe moved to a better bit of floor that would hold the weight better, but my room... they asked for all the drawers to be opened! the bottom 4 drawers and under my bed was just solid paper of magazines! all radio times and tv times! it took hours to shift it out of my room, and had to be taken away in chunks (pre recycling habits) I was told off and my mum made me bin each paper in front of her every week. Sadly I have never collected like this since :-( I also had to clear my parents home last year and had to throw away things I loved but have no use for and no space for, as the comment above says you must cull as well as Glean!