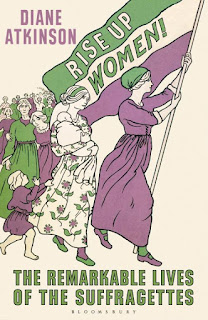 Only this month I realised that although I was not born until 1952, I am among the first generation of women born in Britain to have the right to vote: my mother was born before 1918. A few months after my 18th birthday, in 1970, I was also among the first Britons under 21 years to vote. I knew it was a big deal, but until I read Diane Atkinson’s excellent new book Rise Up women! The Remarkable Lives of the Suffragettes, I didn’t realise what extraordinary sacrifices so many women had made for British women. Apparently, my paternal grandmother chained herself to the railings of Buckingham Palace. Sadly, she died before I was born, so I can’t ask her about it. But this energetic and detailed history brings the fight to life, from the Chartists of the 1830s, to the start of women’s suffrage in 1918.

A question often asked is ‘What is the difference between a suffragist and a suffragette?’ Suffragists hoped to achieve votes for women by gentle persuasion. Although there were fewer suffragettes, they were noisier, more militant, often violent, and so got noticed. They showed, as many activists have done since, that being polite and asking nicely may not get you as far as attacking property and blowing up  post boxes.
From the start of Edward VII’s reign in 1901, the suffragettes’ actions were public and militant and as a result, they endured public derision, assault and imprisonment. In the Great Pilgrimage of 1913, courageous suffragettes marched from Newcastle, Cromer, Bangor and Land’s End, meeting in a rally of 50,000 people in Hyde Park. Women of all classes walked together, camped together and stayed in each other’s homes. They also endured being stoned, beaten up, having dead rats thrown at them and their speeches interrupted. But it gave them even more strength, solidarity and purpose; and they refused to be crushed.
Atkinson relates the tales of women from all classes who fought with flair, energy and imagination: mill workers and actors; teachers and doctors; seamstresses and scientists; clerks and boot-makers. The stars of the suffragette movement are well known: the Pankhurst family, Emmeline and her daughters Christabel and Sylvia; and Emily Wilding Davidson who became a martyr after running under the King’s race horse at Epson. There were also female students at Oxford University (a rare breed) who opened a hat- repair shop to raise funds; the Honorable Evelina Haverfield whose talent was to stand beside police horses during demonstrations and get them to lie down; and Mary Richardson who after slashing Velasquez’s Rokeby Venus in the National Gallery was sentenced to six months imprisonment with hard labour.
Phyllis Keller broke the windows of anti-suffragist Lord Curzon and in her Holloway prison cell longed for Camp coffee and potted meat. The government refused to treat suffragettes as political prisoners, so they stopped eating and went on hunger strike. And the stronger the women, the crueler became their punishments. Kitty Marion, a comedian by profession, was force-fed lumpy soup through a tube 232 times during her three months sentence in Holloway Prison in 1914. It made little difference to her nutrition: she vomited for hours after each ‘meal’ and lost 36 lb. “I found blessed relief to my feelings in screaming, exercising my lungs and throat after the frightful sensation of being held in a vice, choking and suffocating,” she wrote later.
The infamous ‘Cat and Mouse Act’ (officially the “Prisoners (Temporary Discharge for Ill-health) Act, 1913”) allowed suffragettes early release if they had been on hunger strike, but once their health was restored, they were re-arrested, and the starvation and force-feeding began again. Atkinson relates the stories of many who endured horrific prison sentences, when they could easily have led comfortable lives as dutiful wives or daughters. While recovering from a hunger strike at home, Annie Kenney donned black clothes and escaped from the police by climbing down a rope ladder at night. After secretary Hilda Burkitt and bookkeeper Florence Tunks were arrested for a campaign of arson in Suffolk, Burkitt told the judge to put on his black cap “and pass sentence of death or not waste his breath”. You have to admire these gutsy women, and what they did for us, the next generations.
At the outbreak of the war in August 1914, an amnesty was announced and all suffragette prisoners were released. They threw themselves into the war effort and in February 1918 were rewarded with the Representation of the People Act, which gave the vote to women over the age of 30 years, albeit only if they were married or owned property. It wasn’t everything but it was a start.
History is about remembering the people who got us where we are, and Rise up Women! certainly does that. At over 600 pages,this is a definitive history of the suffragettes’ determination during the decade-long militant campaign they fought on our behalf. This book would make an apt present for anyone, female or male, on their 18th birthday. Then they will appreciate what was done to win half our population the right to a vote.
Rise Up Women! The Remarkable Lives of the Suffragettes by Diane Atkinson is published by Bloomsbury.
Posted by Janie Hampton at 00:30

Hmm, it must have split th suffragettes ro have th vote only given to some of them, not all...

I believe the first women in the world got the vote in New Zealand in 1893, closely followed by South Australia in 1894.