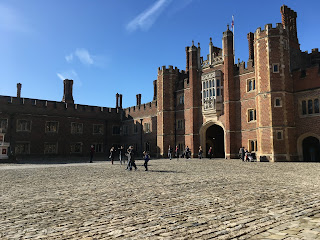 OK - I know that statement needs a bit of unpacking. You see, what this photograph of Base Court at Hampton Court doesn’t show is a series of speakers cunningly hidden under the cobbles alongside the central path and in the wine fountain (out of the picture). It also doesn’t show what they are playing: a rich soundscape of passing carts and horses, the yapping of a lap-dog and the conversations of courtiers, ladies and servants going about their business one morning in 1536.

Eustace Chapuys is extracting gossip from Elizabeth Somerset by the fountain, and later locking horns with the Duke of Norfolk over the refusal of the Holy Roman Emperor, Charles the Fifth to recognise Anne Boleyn as Queen. Thomas Cromwell is interrogating the kitchen boys about the fancies to be served later that day, and the Lord Chamberlain is assigning rooms and chivvying the servants to get on with the unloading of their master’s goods.

When the team at Hampton Court decided they wanted to recreate in sound the bustle and business of Base Court they turned to design agency Chomko & Rosier, who have already come up with some technologically advanced and sympathetically imagined ways of engaging the public with the context of a particular place, including work for Historic Royal Palaces. They've won awards. So Matt Rosier found a brilliant sound artist called James Bulley, and me.

Readers of this blog will know that I am not a sixteenth century specialist, at all, but before I was a full-time writer I was a TV, film and radio director working on such classics as The Shiny Show and The Numberjacks. Hang on ‘Numberjacks Seaside Adventure’ which I directed between getting the deal for Instruments of Darkness and publication has had 15 MILLION views. Please stand by while I hyperventilate for a bit.

Just imagine if one in ten of those viewers grew up and bought one of my novels. I’d be J.K. Rowling.

Anyway, I’m still on a number of mailing lists from my TV days, so I saw Matt’s search for potential writers and sold him on my experience working in production to get myself the gig writing for the Base Court project.

It’s been fascinating. This is a continuous loop of action where visitors might pause for a few seconds, just absorb the atmosphere as they wander by in search of an audio guide, or spend time seeking out bits of gossip and conversation. That means that any conventional ideas of storytelling are out of the window. On the other hand, it all needs to make sense as a coherent whole as invisible characters (Norfolk, Cromwell, the lap-dog) move around the space over the twenty minutes or so the piece runs.

In the end I thought of it like the staging of a ball scene in an opera on a grand stage. Lots of characters and individual members of the chorus have their own sequence of actions around the space, all happening at once, and the viewer decides which bits to focus on, or they let the whole thing wash over them.  In this case what they get to focus on will depend on where they are.

Because the scene is set at a particularly gossipy time (everyone is waiting to see if Anne will produce a son and wondering about Henry’s wandering eye), coming up with the conversations was relatively straight forward. I plunged into the notes from Hampton Court and, of course into the works of some great historians, such as the lovely Alison Weir. I also freely admit that my ideas of the personalities are deeply influenced by Hilary Mantel. Interestingly, I would find that a problem were I writing a novel about the Court, but not on this project. This project is nothing to do with what I think of the period, so it’s wonderfully ego-less compared with the business of writing novels. Also I know Mantel really, really does her research.

I had, of course, the usual fears about accuracy, but not too badly, because everything I wrote was checked by Tracey Borman. (God, I wish I could get Amanda Vickery to go through my Crowther and Westerman novels. Or maybe not.). 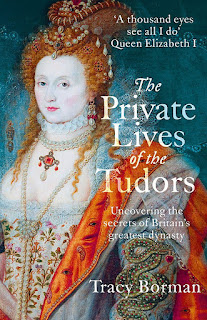 The real joy of the process comes after the writing though. Working with actors again is such a pleasure, they bring so much to the text and convey with an inflection, a breath what would take you forever to get across on the page.

Then there's the edit. The sound I’ve been involved with in the past is designed to come out as a stereo mix from your TV while you sit and watch the pictures. This is a world you can walk around in, and which will sound completely different depending on where you are in the space and when.


James did most of the work of putting the piece together, and creating the underlying atmosphere, then we gathered to listen, discuss, move things about, add space, swap lines, find lute music and decide what a goblet being chucked on the cobbles sounds like. The back and forth is great. With novels, after months working in isolation, the whole process of waiting for comments, responding to them, working out the ramifications of changes through a text of 120K words is slow and painstaking. Here decisions are quick, the effects immediate, and the ownership shared. It’s…enlivening.

As with novel editing though, a lot depends on the relationships you have with the people you are working with and at the moment I’ve lucked into working with people I thoroughly like and admire. Which is nice.

I don’t seem to have put them off with my helpful comments yet either. Since recording Base Court, we’ve also been working on both sound and vision elements for the Tudor Kitchens.

The research and writing has been more of a challenge this time, as it involves delving deep into the specifics and practicalities of this huge operation rather than the skim of gossip, but the same pleasures pertain - having the experts on hand to consult throughout including Richard Fitch and his team, the collaboration with Matt, James and now Kyle Waters on images, and the practical, hands on elements of filming.


I still love the megalomaniac’s paradise of world-building in novels, but it is a great and particular pleasure to get out into the world and be part of a team.

Oh and as I have a longstanding and almost Trumpain tendency to try and rope family members into things wherever possible, I just thought I’d point out that the cute little voice of ‘0’ and ‘1’ in that Numberjacks video is now one of the teenaged servant boys being quizzed by Cromwell in Hampton Court. Thank you, Dylan.

If you want to see what we’ve been up to, the Base Court soundscape is now live, and the Tudor Kitchens should be ready for inspection by early May.

What a brilliant project! I'd love to hear your creation.

What a wonderful idea, like listening to the ghosts whispering. I'm sure visitors will love it.

Echoes of the past, excellent.

Sounds really interesting - wish I lived closer!
On another subject, when's your next book out? It seems ages since the last one and I do enjoy them.

Thanks, everyone! Yes, I'm really enjoying it. And I'm very glad you like them, Pam, and sorry it's been a while. Long story, but I promise I haven't stopped writing novels. No pub date at the moment though.... but there definitely, definately will be!

Amazing, Imogen. I cannot wait to visit and listen in. It is so clever too. Wonderful and exciting.