Heavy industry on the River Meon: Iron by Carolyn Hughes

We are accustomed to thinking of the Meon Valley as a peaceful, very rural place, where cows graze in the meadows, sheep crop the short turf on the hills, and grain and rape and watercress are harvested from the fields and paddies that border the river.
I have said before that, from early times, there were many mills along the banks of the meandering Meon. They were mostly used for grinding grain for flour but also for a number of manufacturing processes, including iron working, cloth processing, paper making and tanning – quite heavy industries.
Today I’m going to look at iron working, and next time I will consider brick making. Both industries were centred around the lower reaches of the Meon, at Titchfield and a little further upstream at Funtley, and both have been very important to the economy of the area and the country.

Iron smelting had been going on in the Meon Valley since Roman times. Evidence of a Roman “bloomery”, a type of furnace, was found during excavations for one of the Forest of Bere’s car parks in Soberton Heath. This method was used from the Iron Age to mediaeval times, and used charcoal and iron ore. The charcoal would have been made from local timber, in this case trees from the Bere Forest, and the iron ore would presumably have come from the Wealden sandstones, found to the east in Sussex and Kent. Once extracted from the ground, the ore was “roasted” before being smelted with the charcoal in the bloomery furnace, which initially was just a hole in the ground, but later was built above ground out of clay, or stone with a clay lining. The bellows used to increase the heat inside the furnace were operated by hand or foot. The result of the smelting was a spongy mass of iron and slag, which needed to be heated again and hammered, as many times as necessary, to remove the slag and produce iron suitable for making plough-shares, cart fittings, weapons and so on.
Later on, iron smelting became increasingly located where water power could be exploited to speed the process.
From the 15th century, “finery” forges used pig iron to produce bar iron. Charcoal was again used to burn the carbon off the pig iron, and the resulting “bloom” was beaten with a hammer to remove the impurities and then draw the iron out into a bar for working.
A slitting mill, invented in the 16th century, was basically a watermill for slitting bars of iron into rods. It consisted of two pairs of rollers turned by water wheels.
The first blast furnace in Britain was recorded in 1496, and they spread across the country during the 1550s. The blast furnaces made pig iron from iron ore, and the basic principle was similar to that of the bloomery, using charcoal, but the smelting temperature was higher. Water was used to drive the bellows to create the draught. Later, in 1709, Abraham Darby used coal/coke as a fuel at his Coalbrookdale (the Midlands) furnaces and, within 100 years, the use of coke was almost universal in iron working.
So what do we know about the Funtley iron mill?
As I have mentioned in a previous post (History Girls, August 2017), until the seventeenth century, the Meon was navigable as far as Titchfield, which at that time was a significant port. Eventually, silting restricted the passage of ships and the busy life of Titchfield as a port began its decline in 1611, when the 3rd Earl of Southampton, Henry Wriothesley, took the decision to block off the estuary of the River Meon from the sea. He built a canal adjacent to the river, one of the very first canals to be built in England, and a sea lock was built across the estuary. However, several years before he blocked off the estuary, the Earl had established an iron mill a little upstream at Funtley, powered by the River Meon, which might suggest that he expected (or hoped) his actions over the port to support, even boost, Titchfield’s prosperity (though in many ways it did decline). Over time, the Funtley iron mill produced a huge quantity of iron.
The iron mill seems to have been built on a virgin site by the Earl in 1603-5. As already suggested, its establishment seemed to be part of the Earl’s attempt to restore Titchfield’s economic health but also his own fortunes after his release from the Tower of London. Wriothesley had been deeply involved in the Earl of Essex’s 1601 rebellion against Elizabeth I. He was sentenced to death, but it was commuted to life imprisonment through the intervention of Sir Robert Cecil, Elizabeth’s Secretary of State. However, on the accession of James I in 1603, Wriothesley was released and resumed his place at court. And he built his iron mill.
A tin mill was apparently also established in the vicinity in 1623, producing utensils for London and perhaps also Portsmouth, although the origin of the tin itself is not clear but was probably Cornwall. However, in the ensuing decades, the iron mill produced an annual total of c.200 tonnes of iron, so clearly the Earl’s strategy worked, and industry in Titchfield did not slump entirely following the closing of the port. The productivity of the mills was already great enough before 1611 to have seriously depleted the local region’s wood resources, used to make charcoal to fuel the furnaces. 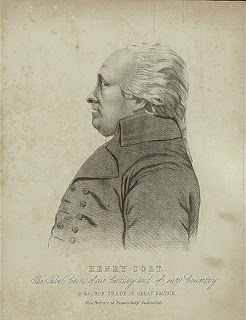 From the 1770s until 1789, the Iron Mill at Funtley was owned by Henry Cort, the inventor of the rolling mill and the puddling furnace, important for the production of iron during the Napoleonic Wars.
As a young man, Cort was a supplier of naval provisions and by the 1770s he had built himself a small fortune. In 1768, he married Elizabeth Heysham, whose uncle William had inherited the family ironmongery business in Gosport, which supplied the navy with mooring chains, anchors and hundreds of different items of ironmongery. Henry took over the business and, after years of experimenting with improved methods for wrought-iron production, in 1775 he bought a forge and slitting mill at Funtley. He wanted continue his experiments, hoping to find an easier way to turn cast iron into wrought iron without the need for hammering.
In 1780, the Royal Navy hired him to re-roll the iron hoops for their barrels. Henry wanted to install new equipment at Funtley, and he turned to Adam Jellicoe, chief clerk in the navy’s pay office, to help finance the venture to the tune of nearly £30,000. (It was apparently normal for pay office clerks to use surplus funds temporarily for their own benefit, though this would later prove Henry’s undoing.) As part of the deal, Samuel, Jellicoe’s son, became a partner in the Funtley works. Jellicoe lived at Fontley House, situated close by the mill, a house that still survives.
In 1783 and 1784 Henry took out patents for new processes, which represented major technological advances in the production of wrought iron. First came the process called “rolling”. In this, the red hot iron was passed through grooved rollers (the design of which he patented) rather than using a hammer to draw the iron out into a bar. The bars of iron were reprocessed several times to produce wrought iron of the desired quality. Rolling replaced hammering for consolidating wrought iron and was 15 times faster.
He also invented a new process for fining iron, removing the impurities to enable it to be forged. The earlier method of fining used a hearth fuelled with charcoal, but the wood needed for making charcoal had become too scarce to enable the iron industry to expand. Newer blast furnaces were using with coal/coke instead of charcoal. Henry devised a method of “puddling” iron in a coal-burning “reverbatory” furnace, in which the molten iron was stirred with a long rod before being consolidated, and then rolled into bars with the grooved rollers. The new method produced rolled iron of such quality that the navy soon insisted that all iron produced for their use had to meet the same standard.
Because the puddling method used coal/coke instead of expensive charcoal, and because the system could be mechanised, eventually iron production became much cheaper and faster. It also became essential once blast furnaces were used. Before Henry developed his processes, England imported large quantities of wrought iron from abroad, but within a decade of his patents, the country became a major iron exporter.
However, everything was about to go wrong for Henry Cort. For, in 1789, Adam Jellicoe died, and it was discovered that he had indeed used navy money – public funds – to finance Henry’s business, but he hadn’t paid it back and he died with large public debts. His liabilities passed to Henry, who also didn’t have the money to repay the debts. A court requisitioned the works at Funtley and another one at Gosport. Henry was financially ruined. His partnership with Samuel Jellicoe was dissolved, although Samuel was later able to clear the debt. The Crown later gave Samuel possession of the works at Funtley where he remained for the next thirty years.
As an acknowledgment of the value of the patents, the government did grant Henry a small pension in 1794. But despite his inventiveness and the contribution he had made to British industry, Henry Cort died a poor man in 1800.
There is very little left of the iron works at Funtley, apart from some sections of brickwork surrounding the millstream and a plaque. 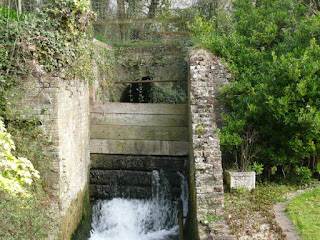 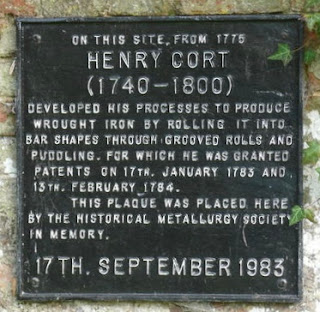 However, in modern day Fareham, Henry Cort’s work is celebrated in the Henry Cort Millennium Project, a permanent exhibition of the work of twelve blacksmith artists from throughout Europe. 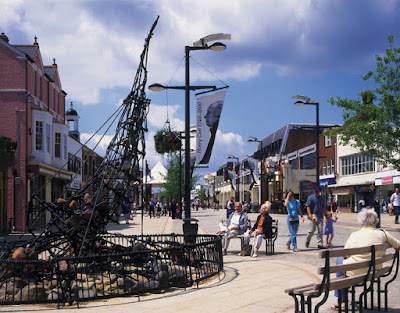 I try to read different historical facts every day. But I lost my phone recently and only advices from https://cellspyapps.org/how-track-cell-phone-without-them-knowing/ helped me to track it. I am glad that I can use my phone again to find out something new.