RICH IN SALT, by Leslie Wilson 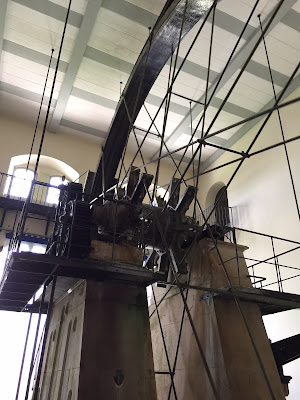 Last year I and my husband went on holiday to the Bavarian Alps, in the region around Salzburg; the name may conjure up an opera festival nowadays, but it means: Salt city. Other names in the area also conjure up salt; the river Salzach, for example, but it's not so obvious, even perhaps if you're a Welsh speaker, that Bad Reichenhall refers to salt. It is so, though. The Celtic name for salt is Hall, and there were once more Celts (I'm not going to get into the argument here about who the Celts actually were) in South Germany and northern Austria, than there ever were in the British Isles. The name element Hall pops up over and over again in this area. Three examples spring to my mind; Hallein, Hallgarten (salt garden), and Bad Reichenhall, the second element of which means 'Reich in Hall', or 'rich in salt.' Reichenhall became a spa (Bad)  because people thought the salt had healing qualities and you can buy a huge variety of bath salts (literally) of different kinds in the area and notably in the museum shop.

Bad Reichenhall has been an area of salt extraction probably since the Bronze Age, but the first documents referring to the salines there occur in the 7th century. By the seventeenth century, they were producing about seven and a half thousand kg of salt per annum.
Salt was, of course, a hugely valuable resource; it was essential for the preservation of food through the long winters, particularly meat. Otherwise, you'd have to live on sauerkraut, which is a good thing, but doesn't contain much protein. It was, essentially, white gold. 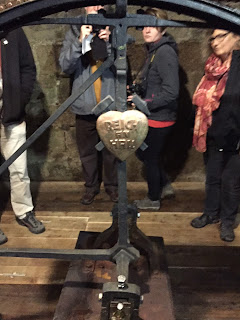 However, if your idea of a salt mine is based on the mines in Cheshire, where rock salt is hacked out of caves for refinement, you have to change your ideas. The salt which was, and still is, extracted in Bad Reichenhall, is a saline suspension, which is pumped up from below. There are two salt works in Reichenhall, but we chose to visit the old one, the Alte Saline. Here you can see the early nineteenth century machinery, still functioning throughout the day, powered by water coming down from the nearby mountain, which ran over enormous wheels and fuelled the pumps. 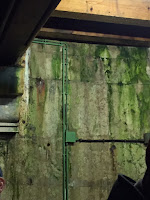 You can go down into the bowels of the earth beneath the Alte Saline, walk along passages slimed green (and probably salty) and see them working. Below is a picture of the salt spring, welling up from below. It was a hazardous business to dig out these tunnels, among the reservoirs of saline. We entered one room which was once such a reservoir. When the workmen broke through into it, twenty-two of them were drowned. 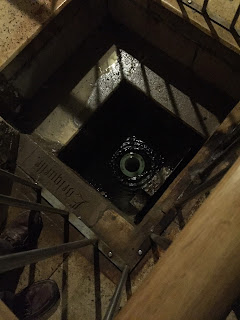 Either the guide didn't tell us, or we didn't hear (the Saline is a noisy place), but I assume that the saline is actually the result of groundwater washing through rock salt, the remnant, as in Cheshire, of ancient seas. The picture below, from the museum at the Alte Saline, shows the salt workers getting precipitated salt from the drying pans; it was packed damp into barrels, and formed into cakes for transportation by road and river. It was a hot and undoubtedly uncomfortable job. The next photograph shows the same process in the early twentieth century, and then you can see the salt being packed up, also in the early twentieth century, but in the new salt works. The Alte Saline went out of production in 1834, after a fire destroyed the works. Nowadays it is a museum only, but one of the most beautiful industrial buildings I have ever seen. 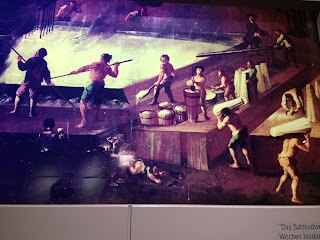 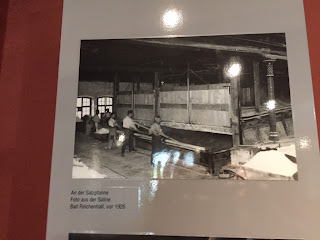 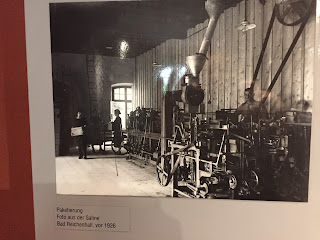 Originally, the saline was processed at the extraction site, but drying it outrequired an enormous amount of fuel, and with time, the area immediately round Bad Reichenhall was deforested. In 1816, the Royal Salt Councillor of Bavaria, Georg von Reichenbach, was commissioned to lead an ambitious project, the 'saline pipeline' (Soleleitungsweg), which channelled liquid saline to forested areas, where new salt works were set up, such as Berchtesgaden. There was a series of pumping stations to deal with the inevitable differences in level of the pipeline. A remnant of this pipeline can be seen above the lovely village of Ramsau, where Joseph Mohr, of Silent Night fame, was once curate, and where we stayed in a house alongside the old salt road last summer.

We walked the Soleleitungsweg on a day of threatening thunderstorm. It's an idyllic track now, leading through fields of wonderful wildflowers, the haunt of butterflies, bees, and of course Alpine cows with clonking bells. 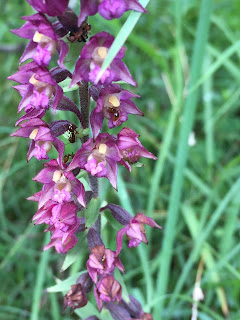 You need a sharp eye to see the old wooden boards on the track, and we missed several on the outward walk, but picked them up later on our return. You can see below, from the information boards on the path, what it once looked like, boarded over all the way. One thing that puzzled us was how they dealt with leaks, which must have occurred from the joints in the wooden pipes, which were simply hollowed-out tree trunks. I suppose they swelled with the liquid, and were preserved by the saline, but nevertheless, leaks there must have been. Perhaps they were just accepted as inevitable. 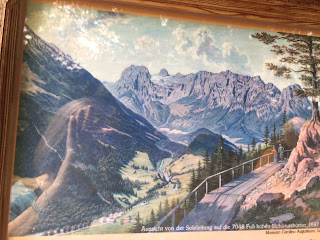 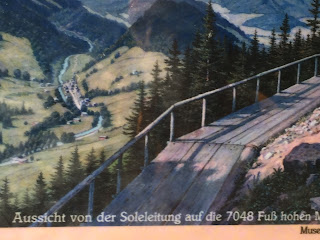 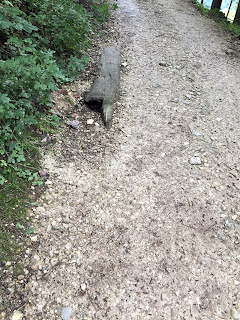 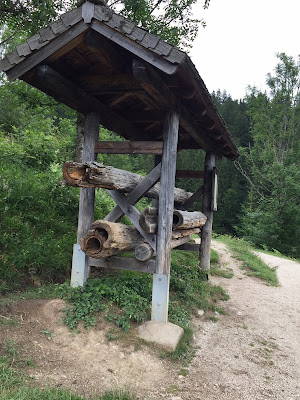 and here is a stand of the old wooden pipes, preserved under a roof, the last remnant of what was an impressive and groundbreaking piece of engineering.


All photographs are mine, except for the one of the Alte Saline. Here is a link to their website

History was one of my fav subjects and I used to write a lot of projects. I just read this and started to write my homework, cause these advices were really helpful.