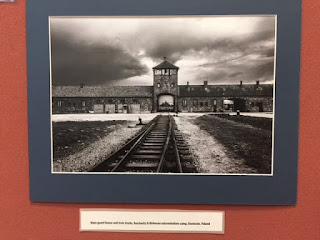 February is really Suffragette month on the History Girls. Out guest on 29th January was Diane Atkinson, who ushered in the centenary of women in the UK getting the vote with her book Rise up, Women!

But before we launch into that, I want to go back five days to Holocaust Memorial Day. I had to be in Oxford on 26th January and stumbled upon a moving and thought-provoking little exhibition in the Town Hall.

It was called Never Again and I was expecting images like the one above of the entrance to Auschwitz-Birkenau death camp. But there was so much more in the exhibition (the photos were all taken on my phone, with permission, so forgive the quality). 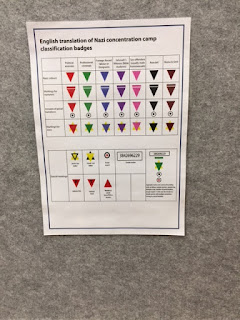 This was the first exhibit to catch my eye - a chart of the coloured badges prisoners wore and what they signified. The headings across the top are:
Political Enemies, Professional criminals, Foreign forced labour, Jehovah's Witnesses, Sex offenders (usually male homosexuals), Asocials, Roma and Sinti).

That was an early lesson for me: I had no idea Jehovah's Witnesses were one of the categories of people rounded up.

There were other lessons too, about the number of children who survived the camps - tiny compared with those who perished but still more than I expected.

My own association with the Shoah is not personal but literary. My German Great-grandfather never returned to his native country after migrating here in the 1870s and two World Wars put paid to my father investigating his ancestors, so that I have no knowledge of whether the Heidelberg Hoffman(n)s were Jews or whether that Georg Hoffmann's lateral relatives supported the Nazis. 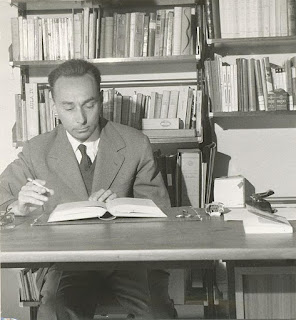 So I found out what I know from books and first among all others, from the writings of the late, great Primo Levi. I was doing an Italian A level course in London in 2000 and our tiny group was offered a choice to study Levi's Se Questo è un Uomo (if this is a Man) or Tomsai di Lampedusa's Il Gattopardo (The Leopard). I voted for the Lampedusa (which I had read more than once in English and have since read and studied in Italian) but the majority wanted the Levi.

I wasn't sure if I'd be able to cope with it but I am SO glad I lost that vote. Not just that book - although that is the best - but The Truce, The Drowned and the Saved, The Periodic Table are all part of my mental and cultural furniture and I can't now imagine not having read Levi.

Another Italian book - a novel, this one - expanded my understanding further of what happened to the Jews in Italy. This was Giorgio Bassani's The Garden of the Finzi-Continis, in which a prosperous middle class Jewish family in Ferrara open their tennis court to young Jews who have been banned from using the towns' tennis club.

At first the Finzi-Contini see themselves as safe from persecution, the benevolent elite, helping those less fortunate, but of course in time their own fate is sealed.

One of our formerly regular History Girls, Louisa Young, has been writing a fabulous sequence of novels which start in WW1 and move through the first half of the twentieth century. The most recent, Devotion, also educated me about the group of Jews in Rome who were members of the Fascist party. Not those who later realised the error of their ways and gave back the tessera, the token that showed membership of the party. But quite fanatical "devoted" followers of Mussolini.

The paterfamilias in Rome simply can't believe that Mussolini meant his kind of Jew when the racial laws were introduced in 1938. After all, he has worked hard for Il Duce, as an engineer involved in many engineering problems. But there is only one end for all the Jews.

All this reading and more taught me how gradual the demonisation of an entire group of people is, how slowly they become classified in others' minds as so "not like us" as to become dehumanised.

And the exhibition showed how this is happening all over again with Muslims. Not an original idea but seeing the two juxtaposed in a small room in a town hall in a city so long associated with learning, enlightenment, liberalism and freedom of ideas was chilling. 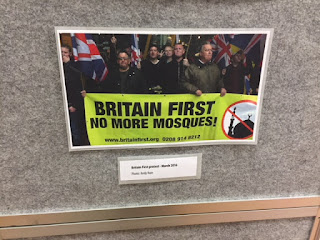 "No more mosques" is no different from the ideology behind Kristallnacht. 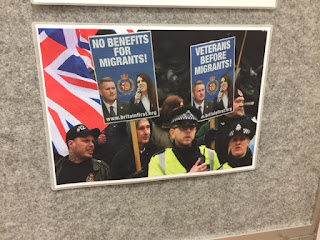 And "no benefits for migrants" is as clear a statement as you will get of the "not like us" approach. Migrants are then not seen as human beings needing food and warmth and shelter and health care and friendship.

And that is why I appeal to all those who care about history and about how the "now" we are living in will one day be the "then" that people of the future will study and shake their heads over. "Why didn't they see what was under their noses?" they will ask.

There is a march against racism on Saturday March 17th, in London, Glasgow and Cardiff, which I urge you to go on.

Remember, women didn't get the vote by reading books and sighing. They got out there and demonstrated. We can do the same. And we can do something to stop the new rise of the hate-filled right.

I'll finish this post with the poem by Primo Levi that I read on every Holocaust Memorial Day:

You who live secure
In your warm houses
Who return at evening to find
Hot food and friendly faces:

Consider whether this is a man,
Who labours in the mud
Who knows no peace
Who fights for a crust of bread
Who dies at a yes or a no.

Consider whether this is a woman,
Without hair or name
With no more strength to remember
Eyes empty and womb cold
As a frog in winter.

Consider that this has been:
I commend these words to you.
Engrave them on your hearts
When you are in your house, when you walk on your way,
When you go to bed, when you rise.
Repeat them to your children.
Or may your house crumble,
Disease render you powerless,
Your offspring avert their faces from you.

http://www.standuptoracism.org.uk
Posted by Mary Hoffman at 00:01

Well said, Mary.
I wish I could say, 'Never Again,' and believe it, but I fear that this viciousness is part and parcel of the human race, part of the cycle predicted by the Niche Space and Breeding Strategy theory.
This doesn't mean we shouldn't resist it to our utmost. I just wish I could feel more hopeful about it.

Just like last time, there's more than one target. A council didn't allow a synagogue to be built in Sydney recently, because they were worried about the safety of locals given the amount of antisemitism that's being expressed.

I've been fighting it for years - for my own cultural group, for everyone else. It's something one does quietly, being Jewish, for it's less safe to be too noisy. It helps great deal when articles like yours appear. I don't have to start with "No, antisemitism isn't fictional. What you're saying to me has a history."