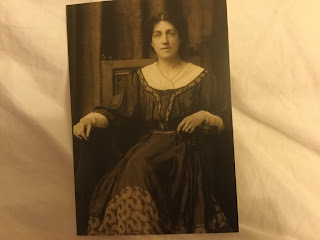 This is May Morris, daughter of William Morris. You can see, I think, that she is a woman of considerable character and intelligence. The exhibition that's just finished at the William Morris Gallery in Walthamstow shows her to be also extremely gifted as an artist and embroiderer. A mere glance at Wikipedia will show you  that she was also a business woman, running her father's company with enormous competence, all the while careful of the conditions of the people (mostly women) who worked under her eye. She campaigned. She worked. She made beautiful things. She had friends. She married Henry Halliday Sparling, secretary of the Socialist League. She had a romance with George Bernard Shaw. Because the Art Workers' Guild didn't admit women, she founded  the Women's Guild of Arts. And to judge by the quotation below, this was what was expected of you if you were born a Morris. To say that William expected great things was an understatement. I have to admit I laughed out loud when I read the quote below and I'll reproduce it here for those with poor eyesight: If a chap can't compose an epic poem while weaving a tapestry, he'd better shut up, he'll never do any good at all." All I could think was: lucky for May that she could easily live up to such standards. 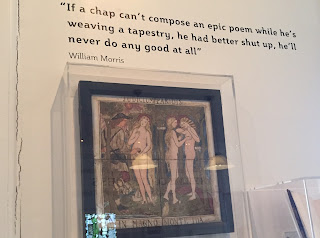 And to prove that she knew her worth, here's a quotation which I'll also reproduce: I'm a remarkable woman - always was, though none of you seemed to think so. This remark makes me wonder whether her father took her a little for granted. 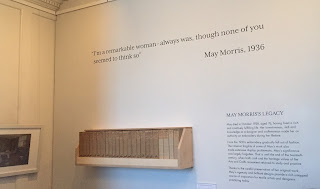 But now she's appreciated in her own right. This exhibition showed off her many talents to the full. As well as the embroideries and  drawings, such as the one.... 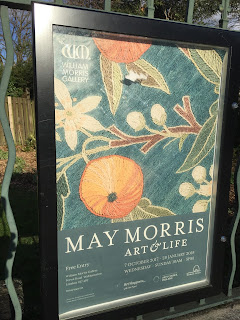 ....shown below, which is part of a pattern that would later become a hanging, all  her gifts are amply demonstrated.  Everyone knows the famous quotation from William Morris about having nothing in your house that isn't beautiful or useful, and clearly May was brought up with this belief and made very many beautiful things, both in her own right and also supervising the work of the wallpaper business that changed the decorating habits of the nation. She lived in Kelmscott Manor in the Cotswolds, and from 1917 her companion was a woman called Mary Lobb. 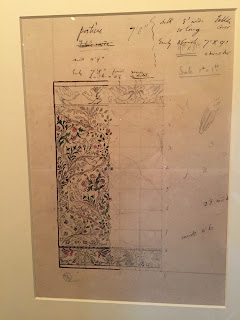 After walking through the exhibition, I was all ready to buy LOTS of postcards to remind me of May Morris's achievements. I had even hoped for a fridge magnet to add to my collection. This image, below and the photograph of May which I've used above were some of the very few images available. It was most frustrating, particularly because William's designs are more than ubiquitous. They are overpoweringly everywhere in every imaginable incarnation: notebooks, cushion covers, mirrors...you name it. 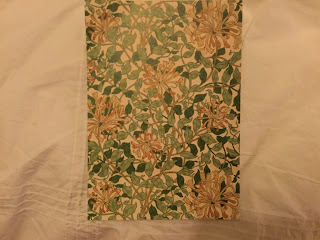 And yes, I understand that they can't produce a great deal of stuff  for an exhibition that's small and temporary, but still, I thought it ironic that the daughter was in the shadow of her father, at least as far as merchandising is concerned! A small quibble after such a wonderful show of a particular woman's talents.  May Morris fought to have embroidery brought out of the purely domestic sphere into the world of art and here it was, on display to hundreds of admiring people. I loved seeing these works and learning more about the woman who made them. 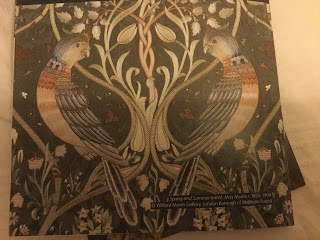 Many women can weave a tapestry while composing an epic poem - it's just that in their case it'll be called a tablecloth and gossip.

Thanks for this, Adele!

Loved this post, Adele - especially the quote about May knowing she was a remarkable woman, "though none of you seemed to think so." It reminded me of something Jane Austen's mother is supposed to have said: "Oh well, Jane writes little pieces to amuse us, but George is the real writer in the family."

Sally Prue - I think you're spot on!
But I also think that if a chap -- or a wench for that matter -- composed an epic poem while weaving a tapestry, neither poem nor tapestry would be as good as they could have been.

Wish I'd got to this, but your post is almost as good as a visit!