Back in Time for Breakfast by Lynne Benton 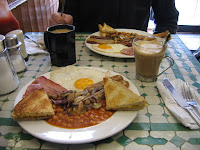 What did our distant ancestors eat when their fresh meat ran out, before they worked out a way of curing meat to make it last longer?  When did they discover that curing it made it taste different? When did they realise that the eggs of chickens, ducks, turtles etc. could be cooked and eaten by humans?

Inspired by the current television series called “Back in Time for Tea”, as well as by a fascinating book called “A Million Years in a Day” by Greg Jenner, I decided to investigate breakfasts through the ages – which has proved remarkably interesting.

Bacon:  Pigs were first reared as domestic animals in the Middle East some 9,000 years ago, and became a staple food, even for poorer people, throughout Europe.  Their popularity was principally because pigs would eat anything, gain weight easily and produce large litters.

Furthermore, as has long been established, every bit of the creature (except the squeak!) could be used.  The ancient Egyptians had worked out how to cure pig meat so it could be eaten all year round (possibly because they were used to preserving bodies for the afterlife!), and we know that bacon and sausages featured on Roman menus, though it sounds as though the sausages the Romans ate bore little relation to those we eat today.  Some cultures and religions banned the eating of pig meat altogether, possibly since pigs were dirty (unclean) and eating it could cause diseases.  Christians didn’t go quite that far: they banned the eating of it on Fridays, holy days and the whole of Lent.  (In mediaeval times this led to a grand fry-up the day before Lent began, when people would use up all their leftover bacon and eggs - Greg Jenner suggests this was a forerunner of the Full English Breakfast!)

Eggs:  It seems the ancient Egyptians were keen on eggs, and on keeping hens specifically for the purpose of using their eggs, though the Chinese and Indians had already discovered the benefits of domesticating fowl.

They learned to cook the eggs in several different ways, most of which are the same as we use today: boiled, fried, poached or turned into soufflés or custards.  Omelettes were also a popular food for the Romans.

Baked beans:  As with so much food, the problem for people through the ages was how to keep it fresh, or at least edible.  During the Napoleonic wars armies on both sides became used to having to eat food riddled with maggots by the end of their campaign.  In 1810 a Frenchman partly solved this problem by sealing food inside a glass jar and then boiling it.  Unfortunately glass is fragile, so it wasn’t ideal, and four years later in 1814 another Frenchman invented the tin can.  This proved to be a great success, except for one thing: getting into the tins to get at the contents.  Hammer and chisels must have been vital kitchen utensils at the time, because, astonishingly, the tin-opener wasn’t invented until 48 years later! 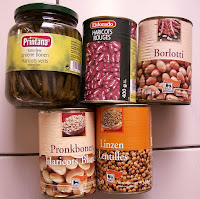 However, once it was possible to store food in tin cans and open them later, people felt they could preserve anything.  Soon an old recipe dating back to the Aztecs for haricot beans baked in tomato sauce and flavoured with sugar, pepper and other spices, became popular as the now very familiar baked beans.

Cereal:  In the late 19th century in the USA, a doctor called John Kellogg had some strange ideas, but was fixated on the idea that a good diet (ideally, as far as he was concerned, a vegetarian one) would cure man of his baser instincts.  In the kitchen of his sanatorium he set his brother, Will, to boil wheat to use as an alternative to bread.  However, one day in 1894 Will became distracted and let the wheat boil over, until it formed a gloopy mess.  Unwilling to waste it, he put it through large rollers, which flattened it and squeezed out some of the liquid.  Much to his surprise, the resulting wheat flakes were not only edible but fairly pleasant.  The brothers fed these to their patients, who reported that they liked them, and after a little experimentation with different grains they invented cornflakes.  The Kellogg brothers then began marketing them to the health-conscious general public, suggesting these were Health Foods, and they became extremely popular. 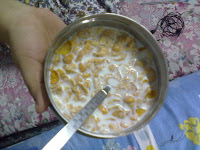 Bread: According to Greg Jenner, “bread is one of the most significant inventions in human history.”  Our ancestors were eating grains and cereal crops 30,000 years ago, but during the Neolithic period they began grinding wheat and barley together, using a stone quern, until they produced flour.  Then they mixed the flour with water and cooked the resulting “loaf” over a fire until it turned into a satisfying food which could sustain life when animals were in short supply.  In the Bronze Age farming became more intensive, so that fewer people were required to produce more food, and by the time of the Roman invasion bread was a staple part of the diet.  Originally all bread was brown, and it was only when “white” bread was invented, which involved throwing away half the ingredients (the husks of the bran etc.) that this became more expensive and thus more desirable among the rich.  This discrepancy in price sometimes led to the unscrupulous practice of adding white ingredients, such as chalk, or even plaster of Paris, to the mixture to make it white so the baker could charge more for his bread.  In this instance the poor were luckier, since they continued to eat the rough, brown bread and thus escaped the nastier side-effects of eating the adulterated white.

But marmalade?  Where did that come from?
I read once (and this may be entirely fictitious) that it was invented in France when Mary, Queen of Scots was a little girl.  When she was feeling ill, the cook would boil up some oranges with sugar as a sort of jam to make her feel better, and called it “Marie est malade”, which in time became shortened to marmalade.  It may not be true, but it’s a nice story. 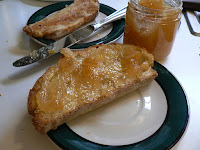 Henry Kellogg considered that if eating cornflakes didn't work, then they could be administered as an enema!

Me again. Marmalade comes from late 15th century French and is taken from the word for quince - marmelo. :-)

Thanks, Elizabeth - I thought the version I'd heard re marmalade was questionable, though it made a nice story. But the thought of cornflakes as an enema is somewhat worrying!