The Bataclan, by Carol Drinkwater 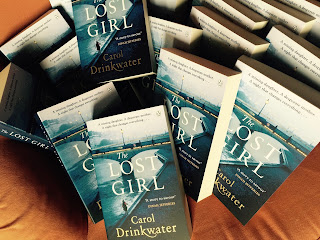 In less that two weeks time, 8th March, it will be the publication date for the paperback of THE LOST GIRL. I have already written here on our lovely HG site about the inspiration for the modern half of the story, which is partially set over the weekend of Friday 13th November 2015 when a series of coordinated terrorist attacks hit Paris, killing over one hundred and injuring more than four hundred.

In THE LOST GIRL, an Englishwoman, Kurtiz, is still looking for, praying to find, her teenage daughter, Lizzie, who has been missing for four years. For reasons revealed within the novel, Kurtiz believes that Lizzie is attending a rock concert, an Eagles of Death Metal concert, which is performing that Friday evening at the Bataclan concert hall, 50 Boulevard Voltaire, not far from Bastille in Paris.

I thought this month I would pull up a few facts about the famous old theatre, the Bataclan, that witnessed such horrors on that fateful night. It is a very curious looking building, Chinese-style, and rather stops you in your tracks if you happen to walk by it without knowing of its existence.

Here is a photograph with its original pagoda: 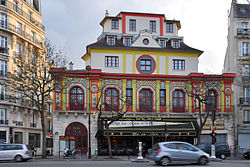 As you can see from the photos, at some point during the twentieth-century the pagoda was removed. With or without its crown, it is an odd piece of architecture for central Paris. It was designed by the architect Charles Duval in 1864 and opened its doors for the first time in February 1865.
Duval, who was trained by his architect father, was also known for his design of another theatre in Coulommiers, east of Paris. He loved theatres and had originally dreamed of becoming an actor.

Why such a piece of chinoiserie? I have no precise answer except that France was taking an avaricious interest in China at this time, gaining in Indo-China. It originally entered Vietnam to give itself a southern foothold into China. France was determined to upstage the British and its holds within the Asian continent.
Between 1857 and 1860, France joined forces with their rivals, the British, to fight the Second Opium War. So, stories from the Far East would have been regularly reported in the newspapers.

The Bataclan theatre's original name was Le Grand Café Chinois. Opulent, capacious cafés were very à la mode in Paris during this period when the theatre and revue scenes were really flourishing. Some of the largest in the world such, as Le Grand Café Capucines, are still going strong. Capucines draws in a huge tourist trade as well as the audiences from the opera at the celebrated Palais Garnier, which is just across the street and was a new attraction to the city back then. An architectural masterpiece finally completed and opened in 1875. 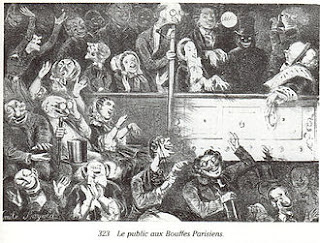 The audience at the Théâtre des Bouffes-Parisiens, the birthplace of Jacques Offenbach's operettas (1860)

When it first opened its doors, Le Grand Café Chinois was a lively dance and music theatre with its stage and bistro/bar on the ground floor and an immense dance floor up on the higher level.
During the Franco-Prussian war of 1870, it was used as an ambulance base. Around this time, after the brief war, France's defeat and the fall of its Second Empire, although I cannot pinpoint the precise date, this appears to be when Le Grand Café Chinois was rechristened. It became Ba-ta-clan and then Bataclan. The nomenclature Ba-ta-clan is interesting because it refers to the title of an operetta,  a"chinoiserie musicale" by Offenbach first performed in 1855, but performed at the Bataclan only in 1885.

Ba-ta-clan is also French slang for 'all that jazz'.

The music hall changed management yet again in the 1890s when it was bought by a famous café-concert singer, Paulus, who towards the end of his career made a series of five short films with George Méliès entitled Paulus Chantant (1897). When showing the films, Méliès had Paulus sit behind the cinema screen and sing the song of the title, thus giving the illusion of cinema sound. Alas, these films appear to be lost now. I have searched all over to find them.

Amongst Bataclan performers at the turn of the century was Buffalo Bill Cody. By 1910, just after the death of Paulus, it offered almost exclusively revue-style shows. For its time, it was 'trendy', offering opportunities to young, up and coming artists such as Mistinguet, Maurice Chevalier and Edith Piaf. Rolling Stone magazine much later described it as, 'one of the funkiest music venues in the city.' Even back at the beginning of the twentieth century that description appears to have been appropriate. 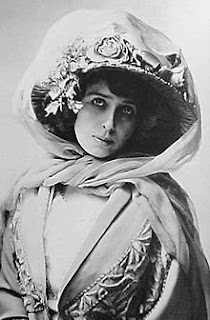 In 1926, due to financial difficulties, the place changed ownership once more, but this time it was transformed into a cinema and remained a cinema until 1969 when after refurbishment, it was re-opened as a concert hall.

I cannot describe how thrilled I was when I discovered the period of the building's life as a cinema.

My second leading character in THE LOST GIRL is Marguerite, an eighty-something retired actress. She walks into the bar where Kurtiz, anxious and uncertain, has settled for the evening, to await the news of her daughter. The two women, seated alongside one another, begin to talk, sharing confidences; intimacies you might only divulge to a stranger.
All the while, although unbeknownst to both women at this stage, the terrorist attacks are beginning to unfold. The Bataclan was the last location of the evening to be targeted.

I was able to use the Bataclan in both the women's stories. When Marguerite was a teenager dreaming of the silver screen, she needed a humble part-time job to feed and keep herself in Paris while she was looking for, auditioning for her "big break". The idea of her selling tickets at a cinema was perfect, she would be quite naturally drawn to cinemas. The Bataclan then, a cinema in post-war Paris. There, quite by chance, she meets a young Englishman who falls in love with her and their stories become intertwined.

One of the great joys of the research work for a novel or film is discovering threads that can be knitted together. I never know where my stitches, threads, will all lead when I begin to write, so when something pops up at you that you feel instinctively is a gift, the work becomes very exciting.
Film, photography, the stage, all of these are subjects that both women in the book are passionate about. These interests bond them. However, as their stories unfold, as the horrors of the coordinated attacks are revealed, we discover that there is another element, far less expected, that brings these two female strangers together. One that neither could have envisaged at the beginning of the evening when they were both strangers sitting alongside one another, ordering their drinks.

The Bataclan has an audience capacity of 1,500. It was packed to the gills on that fateful night in 2015. I discovered the horrors of what was taking place on that Friday 13th on television when I switched it on to watch the news.
I have written a short piece for the Penguin website,
https://www.penguin.co.uk/articles/features/2018/feb/carol-drinkwater-thelostgirl/

about my inspirations for THE LOST GIRL.
The Bataclan and its history is certainly a rich part of my story.

On 11th March 1991, the Bataclan was listed amongst the Monuments Historiques of France. 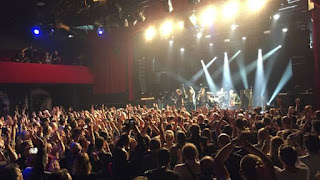 After the attacks, the venue was closed for refurbishment and as a mark of respect for the lives lost. The city was in shock, grieving. The ghosts haunted the music hall, haunted the neighbourhood. It re-opened its doors one year later on Saturday 12th November 2016, the eve of the anniversary. Sting was the performer booked to bring the venue back to life, to make the first step towards exorcising the demons. The concert sold out in minutes even though the nation's reaction to staging a performance there, so soon if ever, was received with a mixed range of emotions.

A formidable security operation was put in place for the reopening. Streets were cordoned off and were patrolled by heavily armed police and CRS, riot squads. Extraordinarily, courageously, some of the audience who had been present at the Eagles of Death Metal concert, 364 days earlier, returned. Several explained to the media that it was really important for them to be there. To celebrate the music, to begin to live again. To help the healing process. That Saturday's edition of the daily newspaper, Libération, praised those who were going to be present; christening them, Génération Bataclan, for their opposition to intolerance and for their faith in France's future.

An organisation has been founded, Génération Bataclan. Its members are fighting to have a memorial, a statue or monument, erected across the street from the Bataclan, to commemorate those who lost their lives during those tragic attacks.

Here are two from the short list of ten proposed: 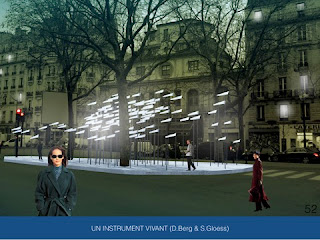 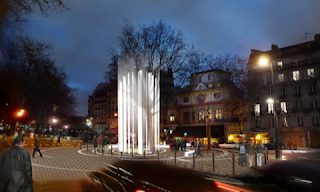 Regeneration, beginning again, is at the very heart, the core, of THE LOST GIRL. 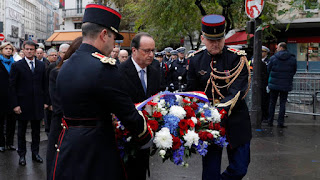 President Hollande, on the first anniversary of the attacks, laying a wreath outside the concert hall. He and Anne Hidalgo, Mayor of Paris, visited each of the six sites where the massacres had taken place one year earlier, and read out the names of everyone who had been injured or murdered. France remembers.

'Rock on, Noble House,' as I have heard say in France of this revered establishment, the Bataclan.

One last link, if you have time and enjoy popular music. The late Jeff Buckley played the Bataclan to tremendous acclaim on 11th February 1995. His concert has become legendary in the world of rock greats. Here is his rendition of Leonard Cohen's Hallelujah It is available on his short album, Jeff Buckley Live From the Bataclan.

It seems a fitting tribute.

I sincerely hope you will enjoy THE LOST GIRL. The reviews have, so far, been amazing.

Email ThisBlogThis!Share to TwitterShare to FacebookShare to Pinterest
Labels: City of Paris, George Méliès, The Bataclan, The LOST GIRL

I had no idea about the history of the Bataclan and somehow learning what a happy place it was throughout its long history, so full of life and everything that symbolised the gaiety of Paris, makes the dreadful atrocity that took place there all the more heat-breaking.