The Rules - by Katherine Langrish 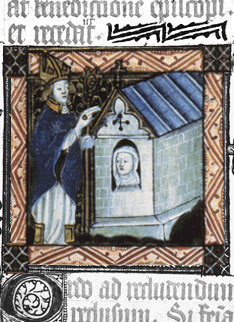 If your new year’s resolutions seem now to be fading like dreams, consider the willpower and strength of character needed to be a medieval anchoress. Wondering what to write for my next History Girls post, I rediscovered a sheet of notes I made a few years ago while researching the background of my story for ‘Daughters of Time’, the History Girls’ very own anthology of short stories about significant women.

My choice was the famous-in-her-own time visionary and recluse, Lady Julian of Norwich, author the first book known to have been written in English by a woman: and I chose to tell the story (aimed at readers of 9 or 10 years-old plus) from the point of view of her young maid Sarah. Lady Julian did have a maid named Sarah, though of course I have no way of telling how old she was when she began her service. 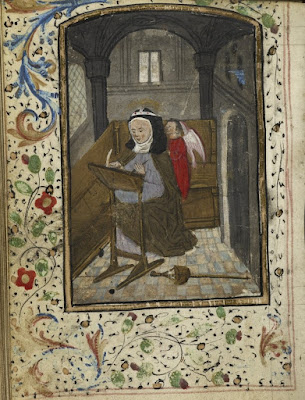 Lady Julian, who spent perhaps thirty years of her life walled up in a small stone room or ‘cell’ at the back of St Julian’s Church in Norwich, may seem a strange character to offer to readers of nine plus. But she was strong, sane and compassionate, and her book, ‘Showings of God’s Love’, is full of imagery drawn from everyday life, as when she describes how God showed her ‘a little thing, the size of a hazelnut’ on the palm of her hand, and when she asked what it was, he told her, ‘It is all that is made’.  Or when she speaks of God as a Mother who tenderly cares for us: ‘for when a child is in trouble or scared, it runs to its mother for help as fast as it can’.

The obvious place to go for information on the life of an anchoress is the 13th century handbook, the Ancrene Riwle, also known as the Ancrene Wisse: ‘The Anchoresses’ Rulebook’, or ‘Information for Anchoresses’. Its unknown author, who drew on advice Aelred of Rivaulx wrote for his sister in the 1160s, was concerned to guide such women (separated as they were from any collegiate discipline) in every detail of their lives, both everyday and spiritual. It was the everyday, domestic details which were of most interest to me when building the world my little servant-girl Sarah was to inhabit. 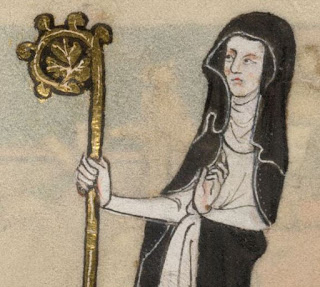 So here are my gleanings from the Ancrene Riwle and Aelred’s advice (remarkably practical and balanced, on the whole) to those women who decided to do this extraordinary thing and spend the rest of their lives shut away from the world in a single room, for the sake of union with the divine. 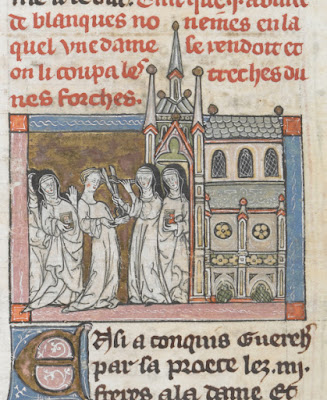 Cut your hair, or shave it.  (In the picture above, a lady has her hair cut before entering a convent.) Let blood four times a year. If you’ve had blood let, though, rest for three days and relax, talk with your maidservants. Wash as often as you please.

When you first arise in the morning bless yourself with the sign of the cross, and ‘in the name of the Father, etc’, begin directly, ‘Creator spirit, come,’ and then while dressing, say the Paternoster and creed, etc.

Eat twice a day from Easter till Holyrood day (Sept 14th , Exaltation of the Cross) except on fasting days, when you mustn’t eat white food.  The entire second half of the year, fast (this means one meal a day, two on Sundays) unless you’re sick. (Eating less in winter sounds odd, but the days would be shorter.) Don’t eat meat or fat. Eat vegetable dishes happily, and only have a little to drink. Don’t, however, try fasting on nothing but bread and water unless you have permission from the bishop. Don’t entertain guests, or hand out charity (you depend on charity). If you do have any poor scraps, send them out secretly. But be generous to women and children and maidens (servants) who work for you. 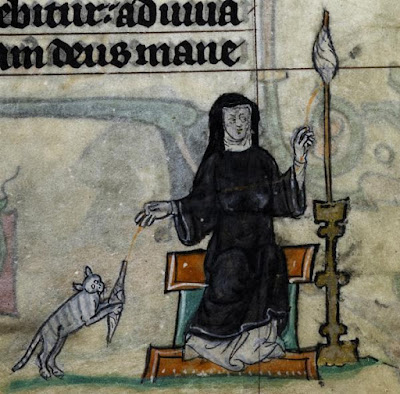 Have no animal but a cat. (How sensible!) Don’t buy and sell. Let your clothing be serviceable and warm; it doesn’t matter if it’s white or black, no one will see you. No linen next to the body; but you can wear a stamin, an undergarment, if you want.  Wear a night-robe, loosely belted.  No chains or hairshirts or hedgehog skins or flagellation (without permission!) Wear soft, large, warm shoes in winter. In summer you can go barefoot if you want. Don’t sleep with your shoes on.  If you don’t want to wear a wimple, wear a warm cap and a white or black veil over it. No rings, brooches, decorated belts, gloves. You can wear a modest gown in a hot summer (a ‘meek surplice’). If you’re going to sew, let it be for poor people or for church vestments. Don’t turn into a school teacher. Your maidservant can teach a young girl, if she likes, and you can supervise, but your attention should be on God. Don’t write letters or receive them.

Have two women, one who stays at home all the time, the other to run errands. The one who runs errands (this was my little Sarah) must not talk on the way and, if possible, she should sing prayers as she goes and go nowhere but where she is sent. ‘Nor must the younger speak with any man without leave, nor go out of town without a trusty companion, nor sleep out.’  If she cannot read her Book of Hours, let her say the prayers with PaterNosters and Ave Marias, and do the work she is commanded to do without grudging. Let the maids’ hair be cut short, their headcloth or cap sit low.  They should keep their eyes down. No brooches, no romping or frolicking. No kissing or embracing men.

If her servants vex the mistress, they should kneel down before her and say mea culpa and accept penance.  However, the mistress is not to nag! If the two women argue, make them kneel to each other and kiss and make up.

The ‘maidens’ are not to ‘munch fruit’ or eat between meals or even drink without permission (but grant permission easily if this is not a fasting day.) Not much talking, and none after compline and until prime next morning, so the anchoress’s silence is not disturbed. Wages: food and clothing only. The anchoress should read to and teach her women once a week.  They should love and fear her, but love more.

Every Friday keep silence. In Advent and the Ember (fasting) days, on Weds and Fridays, in Lent, three days a week, in holy week all week till noon on Easter eve.  (But you can exchange a few necessary words with the maids.)

‘Love your windows as little as possible and see they be small – the parlour’s window the smallest and narrowest. Let the cloth upon them be twofold and black; the cross white, within and without.’  ‘When you go to your parlour window, learn from your maid who it is that has come,’ and don’t become known as ‘a great talker’.  Note: some anchoresses such as Lady Julian became go-to sources of advice and consolation, to whom women especially might address themselves. The other famous medieval woman visionary, Margery Kempe, who was a contemporary of Lady Julian, came to visit her in Norwich. Kempe of course had no calling for the enclosed life and in striking contrast became a traveller to all kinds of holy shrines.

Never be idle, but work, or read, or be at beads or at prayer. ‘The heart is a full wild animal and makes many wild leaps’. (I love this!)

The anchoress and her maidens playing tig and ‘worldly games’ is forbidden!

Take the Eucharist 15 times a year.

True anchoresses are birds of heaven… 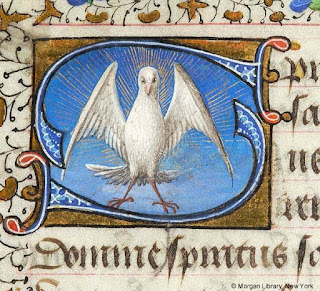 You can read my story 'All Shall Be Well' in Daughters of Time, ed. Mary Hoffman,  Templar 2014

Bridget of Sweden - London, British Library, MS Harley 2850, fol. 47v. Bridget of Sweden (1303-1373), author of Revelationes celestes and founder of the Order of the Most Holy Saviour, comprised of both men and women, ruled by an abbess.

A lady has her hair cut to become a nun: from the Lancelot-Grail (Prose Vulgate Cycle) http://www.bl.uk/manuscripts/FullDisplay.aspx?ref=Add_MS_10293

What a useful resource for your story! And quite sensible, really...

Rather like the tone of all this sensible advice, especially the emphasis on kindness rather than being strict. That Rulebook was a wonderful discovery. Thank you, Katherine.

I must now search out my copy of the anthology, ready to re-read Sarah's story which I remember enjoying very much the first time around.

So strange to our more modern minds, to be held to such high standards with little to break the day, a sort of female hermitage, but not.
Like a convent calling but more solitary, but not alone :-) interesting.