Light as a Feather - The Art of Levitation by Deborah Swift 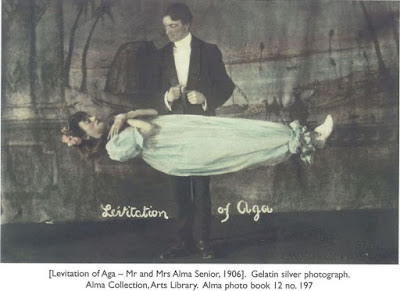 'This is the art of Levitation...

Do these words seem familiar? This is the beginning of the chant for the old parlour game I played when I was a child. Some of you may know it as 'Light as a feather, stiff as a board'. I first came across this at my primary school cloakroom when I was about eight years old. Amid the stink of old gym shoes and wet gabardine coats, a group of girls would gather around another girl, lying with arms crossed on the floor (the supposed corpse), chant a few words and then try to raise her off the ground by only one finger.

The leader would chant; 'She looks pale', to which we would all reply in ghostly tones, 'She is pale!' Leader: 'She looks dead.'
Us: 'She is dead!'

After this somewhat morbid chant we would count backwards from three to one and...oh cripes! The person would actually lift off the ground. Half-terrified, half-amazed, we would scream in horror and the person would fall in a tangled heap back to the ground. Where on earth did this 'game' come from? Do children still do it today? Thinking back on this now, it seems a completely creepy and bizarre activity.

Or it did, until I was reading Pepys's Diary last week.  As part of my research for my next book, I was astonished to come across a report of precisely this activity. Three hundred and fifty years ago schoolgirls were apparently doing exactly this. Now whether the activity came from Pepys's Diary and subsequent girls copied that, or whether it was already existent, piqued my interest. Here is Pepys's version, told to him by a friend on 31st July 1665:

"This evening with Mr. Brisband, speaking of enchantments and spells; I telling him some of my charms; he told me this of his owne knowledge, at Bourdeaux, in France.
The words these:


He saw four little girles, very young ones, all kneeling, each of them, upon one knee; and one begun the first line, whispering in the eare of the next, and the second to the third, and the third to the fourth, and she to the first. Then the first begun the second line, and so round quite through, and, putting each one finger only to a boy that lay flat upon his back on the ground, as if he was dead; at the end of the words, they did with their four fingers raise this boy as high as they could reach, and he [Mr. Brisband] being there, and wondering at it, as also being afeard to see it, for they would have had him to have bore a part in saying the words, in the roome of one of the little girles that was so young that they could hardly make her learn to repeat the words, did, for feare there might be some sleight used in it by the boy, or that the boy might be light, call the cook of the house, a very lusty fellow, as Sir G. Carteret’s cook, who is very big, and they did raise him in just the same manner. This is one of the strangest things I ever heard, but he tells it me of his owne knowledge, and I do heartily believe it to be true. I enquired of him whether they were Protestant or Catholique girles; and he told me they were Protestant, which made it the more strange to me."

I have found no earlier reference to schoolgirls attempting to levitate, but perhaps the idea came from St. Joseph of Cupertino (1603–1663) who was an Italian saint who flew high in the air or hovered just above the ground whilst in mystical ecstasy. His life being just before Pepys's time, perhaps these girls could have heard of him, and the craze started then.

Of course St Joseph of Cupertino was nothing new; in the first century a man named Simon Magnus levitated in full view of St. Peter in a challenge to prove he was endowed with supernatural powers. But Cupertino would have been much talked of in Pepys's period, as his 'floatings' were apparently witnessed by hundreds of people, many of whom testified, as part of his canonization process, to seeing the phenomenon. There are written records in the Vatican from many eminent churchmen, along with ordinary people, giving copious details about Cupertino’s levitations.

Of course in England there was suspicion at that time of anything Catholic. This would explain Pepys's comment "I enquired of [Mr. Brisband] whether they were Protestant or Catholique girles; and he told me they were Protestant, which made it the more strange to me."

I find it surprising that young girls should do it at all, in an age where to float would be tantamount to witchcraft. In fact one of the tests of witchcraft was whether the woman would float in water, and whether she was light enough to fly. 'Weighing' witches was common in this era.

The floating, light and ethereal body is an idea found in most religions, and the wish to levitate akin to a desire to rise above the physical, whilst still inhabiting an earthly body. The idea of levitation was particularly prominent in the Victorian era when it became conflated with Spiritualism and psychic phenomena such as poltergeists. In the Victorian era is nearly always a woman floating, mysteriously under the control of a man, so it is rather nice that this weird ritual has been (as far as I can tell)  mostly the province of girls.

In our popular imagination, to be able to fly and defy gravity is the stuff of dreams. Of course as an eight year old girl, I knew none of this. The unexplained is always thrilling whether you live now or in 1665, and children's games are often much older (and darker) than we suspect. Do any of you remember other versions of this 'game?'

I didn't know Pepys witnessed this!
I've never seen it done or taken part in this trick myself (I don't get out enough) but friends have told me about their experience of it -- though, oddly, none of them mentioned the chant.

They told me that they were asked if they could lift someone sitting on a straight chair 'with one finger'? They dutifully said no. How about if four of you tried, each of you using one finger? They tried and couldn't. -- Then they were told to lean their heads together and 'concentrate and believe.' They then tried again, and lifted the chair and person off the floor, using one finger each.

Perhaps they mentioned the 'light as a feather, stiff as a board' chant and I just forgot about it.
You can find the trick all over YouTube and there's this wiki article -

I gather it's also used a lot in 'team-bonding' courses and other inspirational or aspirational contexts as a way of proving that you can do anything as a team. -- It sounds like my friends' experience of it had been coloured by this or by a stage-hypnotist's performance.

Fascinating that it goes back so far! And if Pepys saw it in 16-something, it's probably much, much older.

This was a craze at my school in about 1968. I remember lying on the grass in the playing field with the others around me chanting 'this boy looks pale...' It's always been a mystery to me how it worked. How interesting that it has such a long history. A lot of traditions get passed down in the school yard I guess.

Fascinating post and game, though not something I've ever played. Thanks.

Great that it is used for corporate team-bonding these days. Would love to see a group of 'suits' doing this. And glad to hear from Rod that boys did it too.

I played this as a child. But I'd completely forgotten about it until I read your fascinating post. We never used a rhyme, but the person used to lie flat on the ground with their arms crossed like a corpse and four people would use one finger each to lift her. I remember being both a lifter and liftee at different times and it always worked. Such a peculiar sensation when you were being levitated, rather like sensation you get with sleep paralysis as an adult. For some reason, the teachers forbade us to do it,which made it all the more exciting. Thank you for awakening that memory!

Hi Karen, glad it wasn't only me. That would have been even more strange - to be at the only school that played that game. Yes, there was asense of subterfuge when we did it too!

So many seem to have experienced this, me included, but nobody seems to be curious about how it's possible. Has anyone seen anything to explain it?