Pictures and Plums for Fingers and Thumbs - by Sue Purkiss

I'm indebted to a friend of mine for this month's post. She was having a clear-out, and decided that a pile of books which had belonged to her grandfather finally had to go. Most of them went to Glastonbury Rural Life Museum - but I managed to divert a few of them my way. Here's one of them. 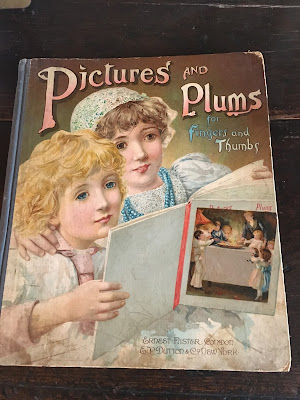 You should just about be able to say that the inscription inside the book is dated 1905, and says:

Rowland Edgar Weston
From his Mother
on his sixth Birthday. 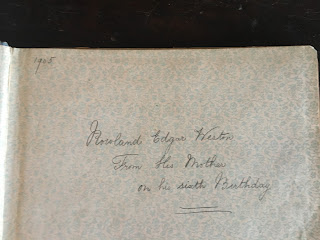 The publishers are EP Dutton & Co New York, and Ernest Nister London. It's a collection of verses, short stories and nursery rhymes: a few are credited to the author, but many aren't - and I can't see any credits to the illustrator. 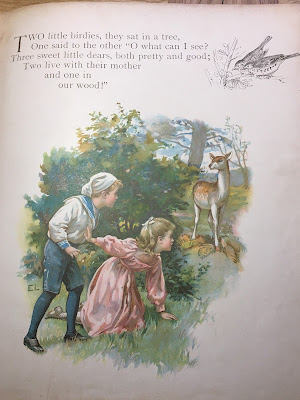 Of course, they are very clearly from a bygone age. But the illustrations are charming, I think. Here's a poem about curly hair. 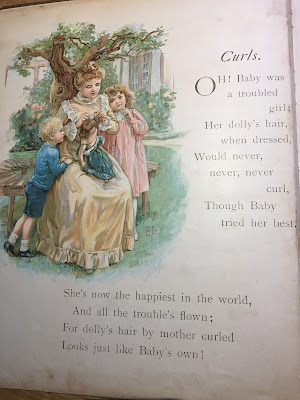 This - below - is not the kind of story you'd find in a modern book. I think you should just about be able to read it - it's about Jessie, whose twin brother Philip catches measles, leaving her bored and with nothing to do. But Mother reproaches her, saying: "I would not cry so much, or you will melt away like the sugar princess on the cake." Suitably chastened, Jessie trots off for a walk and comes back with a huge bunch of daisies and grass, which she puts into a pink mug and takes to Philip, who is "so pleased." (Really?) And that's it. Nothing like a nice little moral message. 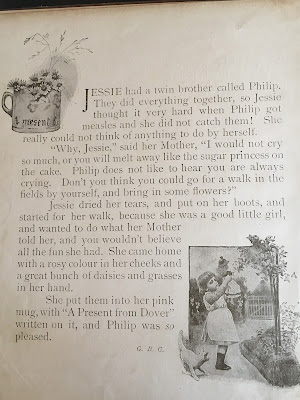 But this is the one I know you're all going to love. It predicts our girl's future. Just in case you can't read it, here are the last two verses:

When I'm in the twenties,
I'll be like Sister Joe;
I'll wear the sweetest dresses
(and maybe, have a beau!).
I'll go out in the evening,
and wear my hair up high
And not a girl in all the town
shall be as good as I

When I'm in the thirties,
I'll be just like Mamma;
And, maybe, I'll be married
to a splendid big Papa.
I'll cook, and bake, and mend,
and mind, and grow a little fat
But Mother is so sweet and nice,
I'll not object to that. 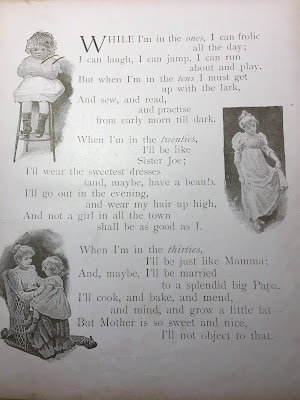 Isn't it sweet? I think Dickens would have approved. It looks as if young Rowland enjoyed it: it's well-used, and he's coloured in some of the pictures and even drawn one of his own at the back, of a house with a hedge beside it with a gate. I love it!

Delightful! I always admired the boldness of those who dared to colour in any b&w book illustrations, a thing I'd never do then - or now.

Thank you sharing this sweet book. They give such a wonderful insight into what people regarded as the ideals of family life, childhood and indeed wifely duties at the time. I have novel for older children from about this date which a 'good' boy is corrupted into swearing and neglecting to say his prayers at boarding school. It ends with the boy repenting on his death bed at school, but we are told his mother was much consoled knowing he died a sadder and wiser child. I do hope these books continue to be preserved.

I think he should have died swearing a blue strip... But they are fascinating. If they were in my house, they certainly wouldn't be leaving.

The art is beautiful! I like the bored little girl having a good time out in the fresh air though you’re right - such a story would not be published today, when parents would be worried the child out by herself in the fields might hurt herself or be bitten by a snake or whatever!

Lovely post, Sue, and what a lovely book! The poem about Curls reminds me of my childhood, when having curly hair appeared to be essential for all girls (and mothers of girls). I'm sure my mother felt that my straight hair was some sort of reflection on her!

I had blonde curls when I was little, Lynne, and my mother had them cut off because I made such a fuss when she washed my hair. I think I still have a curl somewhere!