As readers of this blog may know, I love ephemera. I also hate clutter, so my bits and pieces have to work hard to justify their continued existence in my house and life. This week, a box of photos, coins and – well, junk, I suppose, had a trip to Charney Manor in Oxfordshire, to earn their keep doing what they do best – as writing prompts in a historical fiction workshop for the Scattered Authors Society(which numbers some History Girls in its membership!)

I called the workshop Pennies From Heaven. The premise was simple. Every participant – all published writers for young people, some experienced in historical fiction, others not – was invited to choose a photo from a selection. These photos are a motley crew. Some are of my own family and ancestors, others discarded by a friend, some picked up in junk shops, at least one sent to me by a fellow writer because she thought I’d like it. At this point I can’t tell for certain which are which – they have all become simply themselves. The young man in uniform ready to go to World War One? A great-great uncle perhaps, or maybe not. The girl with the pronounced chin and carefully-waved hair? My granny had several pictures of her but I have no idea who she was.

It doesn’t matter. In the workshop, in the imaginations of the writers, they all became characters, assigned a rough period in history according to the clues of clothes and hairstyles. After a series of prompts, all the writers felt they were getting to know their character, and I was careful not to say who the people ‘really’ were, even when I knew their identity, at least until afterwards. The boy in the picture with my eight-year-old father in 1954 must have been a pal, but now he’s Billy, and he’s got a whole new backstory (and, in fact, a future – ‘his’ writer got so into Billy’s story that she’s got a new book idea!) The young woman with Aunt Annie, dressed in boys’ clothes? I’d always assumed it was Gran, dressed up for a Sunday School play or something, but now I look more closely, inspired by the writer who’s chosen the picture, and I don’t think it’s Gran at all, which makes me wonder anew about my spinster aunt. 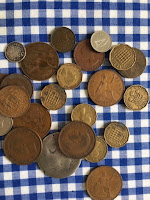 Then I gave them all money, just one coin, from the right period -- this is what gives the workshop its name. I asked them to write down one fact they were confident about from the year the coin was minted, and one thing they thought was contemporary but might need to check. Then it was on with the story – because what mattered about this particular coin was its impact on their character.  Holding and smelling the old coins, letting them jingle, feeling their weight, imagining their character earning, finding, spending or losing them seemed gave the writers a deeper sense of character and period. And not getting too hung up on the historical facts was a reminder that details can always be checked later, and that character and story are at the heart of the writing. Often, as historical writers, we can get so bogged down in facts and research that we can forget about having fun.

Finally I invited the writers to come and choose an object for their character. The objects are all small and valueless but everyone found something of interest – a lipstick with an ingeniously attached tiny mirror; a huge key; a tiny notebook; a lace doily; a savings book. Again, the writers wrote ferociously as the imagined a scene involving their character and one of the objects. 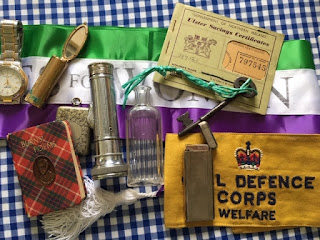 I’ve done this workshop, or variations of it, often. But this one felt special. Possibly because everyone was already a writer, so they tended to produce really interesting material. Possibly because, as we were all staying at Charney together, I heard some lovely follow-up: at least two writers are embarking on whole new books inspired by the workshop!
But as I packed away the dog-eared photos, the coins, and the junk in my suitcase, I also reflected on how happy I was to be able to use them in this way, to let them live again in someone’s imagination.

And in a couple of years, let's hope, you'll be able to read about them in at least two new books!

This is brilliant - wish I'd been there!

Thank you again, Sheena, for the inspiration - Billy's story is still germinating, so I'll let you know when it's fully-grown!

Such a wonderful idea! So much better than the 'here's ONE thing for the entire group to 'hang' an idea on so now get busy and each write a unique story' activity I've encountered so often in writing exercises. The physical items create a connection with the past; and the photos form an individual relationship and allow those persons stories to be told - brilliant!

Thanks everyone! It was a lovely experience for me too, not least because it gave me an idea for this month's blog post!