It's not often you get a Press Release for a book, with a quotation from Hilary Mantel. Here it is in full:
"Alix Nathan cuts against cliché, against the received version, against cosiness. She leaves her reader restless, curious, wanting more. She is an original, with a virtuoso touch."

Having read Nathan's adult novel, The Warlow Experiment, I wouldn't disagree, though I do have some reservations, which I'll get to later.

The starting point for the book was a snippet Nathan found in which Herbert Powyss advertised, in 1793, for someone to live solitarily underground for seven years, without human contact, in return for £50 a year for life.

A tame hermit wasn't a rarity in the eighteenth century but this was not a request for some sort of human ornament to a formal garden. It was a scientific experiment. Alix Nathan takes that advertisement and runs with it. History doesn't relate what actually happened but the novelist fleshes out the situation, the character of Herbert Powyss, John Warlow, who takes up the offer, his wife, Powyss' servants and the relations between them all.


As she tells it, the only person to apply for the "job" is John Warlow, a labourer with a wife and several children, some living, some dead. He must agree, as the original ad stated, not to cut his hair or fingernails and toenails for the full seven years. His meals are sent down to him on a dumb waiter and he gets the same food as Powyss. His bodily waste is sent back up in the same dumb waiter; the details are not for the squeamish.

The apartment created for the experiment in the cellar is comfortable, well-furnished, with books Warlow can scarcely read and a chamber organ he certainly can't play. He has a comfortable bed, plenty of candles and fuel for his fire, tobacco as needed and a laundry service for his clothes.

The bath has only a cold water feed but, as Warlow barely washes, this is hardly a problem.

It is clear that Powyss was expecting a very different subject to respond to his offer. One of the tasks for the confined man is to keep a journal; another to keep the clock wound every eight days. Both tasks prove equally impossible for Warlow.

Powyss, a single man in possession of a fortune but with no inclination to marry, lives in a big house, where he is obsessed with having a paper published by the Royal Society, of which he is an enthusiastic member. his passion is gardening. He collects seeds and other specimens, like many another eighteenth century amateur botanist.

But the incarceration of John Warlow is going to be the subject of his projected paper: Investigation into the Resilience of the Human Mind Without Society.

It is clear from the beginning that the concept of the experiment does not allow for the individual response of the subject: Warlow gradually deteriorates over four years from even the degree of civilisation he had at the beginning. He has literally nothing to do; at least nothing he is capable of doing. In such a situation, the book suggests, a man with gradually run mad and destroy his surroundings.

Meanwhile, up in the rest of the house, Powyss sees Hannah Warlow once a week to give her money for herself and the children. He becomes attracted to her and she to him. And his degeneration parallels that of the man living in the cellar.

The servants are curious about Warlow and one of them, Abraham Price, the gardener, is a follower of Tom Paine, who feels the immured man is being deprived of his rights. As a result of a chain of events, it is Price who releases Warlow ahead of time, a liberation which leads to violence, madness  and deaths.

And here is where my reservations lie. Nathan's novel is an experiment in itself, a forensic study of the effect on solitude on a human being, which pre-empts whatever Powyss might have written in his paper. And every human relationship in the story ends tragically. It is this lack of redemption or any kind of hope which made the book for me something short of great. 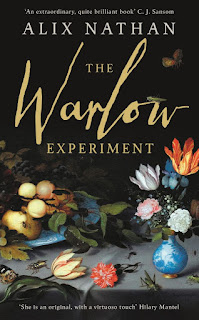 This sounds intriguing. I get what you say about the lack of the possibility of redemption - I generally like my stories to have even a grain of hope in them, somewhere. I'd need to read the book, but possibly the dehumanization of Warlow by Powyss leaves little hope of redemption anyway? Sounds like an interesting read though!