Holding on to the Past by Penny Dolan 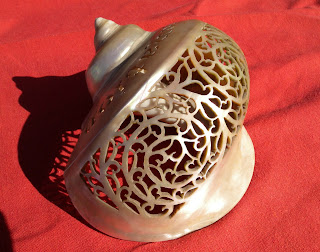 At one time, when working with children in a cross-curricular way, I used to ask what was the oldest object – the oldest “thing” – they had in their homes. Then, gently, I expanded the question, asking for the oldest thing they had held or felt or seen. It was a way of leading into the idea of traditional stories coming “from long ago” and of offering children a way of telling their own stories.  However, as make-over frenzy spewed from the small screen into homes, followed by minimalism with or without storage cabins, the question became harder to answer. Old old was out. New was “in”, even though the decorative style might be brand new “old”.

I have always loved objects with stories or even part stories attached to them, to uncover the how or why or even when. It’s a way of trying to classify things, evident in the Tradescant Cabinet of Curiosities in the Ashmolean Museum, although the objects there are more to do with the natural world than historic artefacts.
Touching, holding, observing, imagining: such valuable occupations! There’s always a special happiness in the museums where children can handle or be close to some of the exhibits, to bring the past within reach. 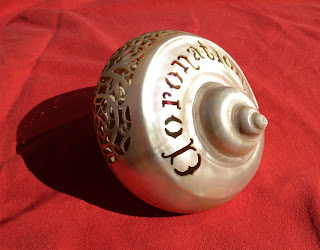 One of the oldest things I own is this shell, with its band of swirls and patterns and the word “Coronation” piercing the pearly surface and is about the size of a largish tea-pot. The only clue about the shell’s age is the knowledge that it was brought back from India by my grandparents sometime around 1918, and is one of several objects my grandmother owned and that I got to know when I lived in her house.


So the Coronation celebrated won’t have been that of the unhappy Edward VIII, because they had been in England too long by then. It might have been from the Coronation of George V in 1910 but having mulled over various family dates and the fact that my grandmother kept the shell when so many other items from her life were discarded, I feel the shell is likely to be a souvenir from the Coronation of Edward VII in 1901, which would have been around the time of my grandparent’s marriage.
Was the shell a wedding present? If so, don’t know the giver. Was it a present from him to her? Or from someone who was a superior officer? This was an army marriage, after all. Was it a gift from a group of his fellow soldiers? The shell never felt a beloved thing, even though she always displayed it in the glass cabinet in her best room. It iwas not loved like her favourite green glass witch bowl, which could be filled with roses. The shell was and is an almost hundred year old mystery.
Nobody ever told its story. We were not a family that believed in the re-telling stories. Stories could stir up trouble or sorrow or memories best shut away. The two World Wars in the first half of the 20th Century quietly buttoned up many mouths. “Telling” never changed anything anyway – and wasn’t “telling stories” what liars did?
Yet I loved to wonder about all the special treasures my grandmother kept in her own glass cabinet and elsewhere. There were many: this carved shell; the tiny leather shoes; a stuffed alligator; a beaded snake, a pair of tiny china dolls and even the “beautiful white palace”, which I’ll write about another day. Not forgettign the box of not quite so ancient grease-paint that led me into a love of the theatre.
I’m sure my need to fix stories into the past grows from a curiosity about these “old” and found objects.
So now, do tell. What’s the oldest object you’ve ever held in your hand?
Posted by Penny Dolan at 07:00

If we don't count fossils, it's probably the stone arrowhead my son brought me back from Belize. It was just lying beside the track in the middle of the rainforest. The point has broken off, but the knapping marks are as clear as the day it was made. Gives me shivers when I handle it.

I love the coronation shell, and so beautifully photographed!

When we were restoring our apartment, we had to remove some salt-rotted bricks and found some Byzantine arches ... 13th century, probably. But the Soprintenza decreed we should re-cover them because the 'tamponamento' was also 'storico'. So I touched them, photographed them, and reburied them. I still see their ghosts through the plastered walls, however.

Your shell is all the more beautiful because one can imagine how many attempts were made where the brittle surface snapped or fissured. I bet there were ten rejected shells for every perfect one. A bit like a book manuscript, really!

Probably an ancient Near Eastern tablet I seem to remember being passed around a class when I was in first year. It was so old and so alien, it was hard to summon up appropriate feelings - it was just too much to take in!

When I was digging at a Roman fort in Somerset I found a Paleolithic handaxe which was petty cool! Other than that, lots of Roman pottery, iron age pottery, roman brooches :)

I love your shell - it's really beautiful. Oldest article I've held - hm. That's tricky. Have obviously seen a lot of charismatic old things, but actually held - my mind's gone blank. I do have a little carved wooden sho which used to belong to my Granddad - some day I'd like to find something out about that. I'm very fond of it. But I don't think it's all that old.

Beautiful post, Penny and a beautiful shell. You HAVE to write the story now. I don't know what the oldest thing I've ever handled was....my grandmother's silver candlesticks perhaps? They must have been from the nineteenth century as they had belonged to her mother! Not too old...no prehistoric stuff. But agree that Museums play a wonderful role in this...

Wonderful Penny!!! Such lovely things to ponder. On a stony 'kopje'(hill) out in the veld somewhere in Botswana between the Shashi and Limpopo rivers I found a piece of pottery shard and an arrow-head. It was wonderful to have in my hand two things that were shaped so painstakingly by other hands so long ago. I like to imagine I am the first to hold them since they were dropped by their owners.
And in the Petrie Museum where I was doing a workshop, the pupils and I were able to handle a ring that had been worn by Akenaten (Nefertiti's husband).

Oooh! What amazing things you've all found and in so many amazing places. The arrowheads and axe! The hidden bricks, the shoe, that ring!(Not to self - do not steal ideas! )

Especaially liked Juliette's tale of the tablet passed around in class and meeting the quiet, private space where there is only you and the object, no matter how many people around.

Needless to say, I have now thought of lots of other things and other occasions. . .

A beautiful thing, that shell. So sad that your family didn't pass on its story.
Oldest thing - and person - I've ever held was a human skull, around 5000 years old, when I visted the 'Tomb of the Eagles' in Orkney. A group of tourists were shown round by the daughter of the farmer who excavated it, and she opened a case, took out this skull, and asked who'd like to hold it. I almost knocked her down. Then, feeling I was being selfish, I offered it to the others - who all shrank back against the wall. Strange people.
It felt beautifully smooth and polished, and I was in awe of it - but, much as I would have liked some contact with whoever originally inhabited it, there was nothing.

I love the shell. I have held quite a lot of ancient things in my hand - pebbles on a beach, for one! Flints in my garden, which are the remnants of ancient sea creatures. But as far as human-made things are concerned, this isn't terribly old, but Stewart the handyman found a little clay pipe when he was digging in our garden to put up my greenhouse, and also we found a bit of ploughshare which is now rusting away on the terrace. Those things connect me with the earth I till too, which contains the remnants of animals, and maybe humans, too. Maybe chemicals from the blood of the Civil War soldiers who died on Balmers Field, which our plot is taken from, on the day 'the dew fell red with blood.'

Your shell is so beautiful. I think the oldest thing I have held is a stalactite. It was found when a new road was built through the woods where much of my novel is set. My stepfather gave it to me and it is very precious - though not at all beautiful!

Once, ironically in a museum near Princeton, N.J., I was given a dagger to look at that had been fished out of the Thames near London Bridge. It was a thousand years old. Holding it made the hairs stand up on the back of my neck.

At the medievalist conference in Kalamazoo I purchased two coins, both from either the late 13th century or very early 14th, one from Ravenna and one from Florence. The idea was to have coins that Dante might have touched, and to touch them myself before starting to write about his life and time. (Real coin collectors would wince, I know, and tell me to leave them in their plastic holders. Nope.)

The oldest book in my collection is from 1699.

Treading grapes in an etruscan stone grape-treading tank on a riverbank . . . Ghosts of feet past. . . My friend makes the wine following etruscan techniques. can't sell it, obv,- health and safety - but it is delicious.