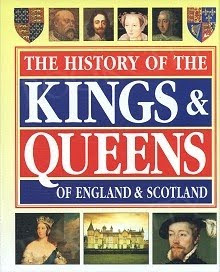 
In my November blog I wrote how I disliked history until I was sixteen. I didn’t ‘get it’. What was history to me? Dates. Kings and Queen. Laws and treaties. But when I was sixteen, I studied the Industrial Revolution and I suddenly realised that history was all around me in my home town of Rochdale. I understood why industry had built up in the town; how people had flocked there to find work; how the new inventions had made manufacturing on a grand scale possible.
At last I knew that history wasn’t just about kings and queens, it was about people and how they lived and how their lives changed, for better and for worse. 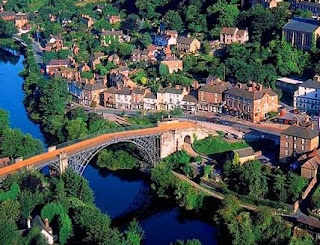 Because my own introduction to history was dire, I feel passionately that children should enjoy the subject from an early age. Have fun with it. Feel a part of it. With this in mind, I must enthuse about the pleasures of living museums and I’m lucky enough to live near one of the very best – the Ironbridge Gorge Museum in Shropshire.
This part of the country is often called ‘The Birthplace of the Industrial Revolution’ because it was in Coalbrookdale (now known as the Ironbridge Gorge) that Abraham Darby I perfected the technique of smelting iron with coke in 1709. It made the production of iron much cheaper and so the great quantities needed for steam trains and bridges and other inventions of the 18th and 19th centuries were now possible. 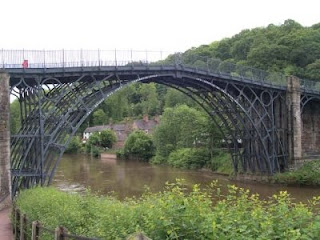 When his grandson, Abraham Darby III eventually took over the running of the Coalbrookdale Company, he built the first major cast-iron bridge over the Severn in 1779 – an amazingly complex structure with joints modelled on those used by the carpenters of the day. The bridge was unique and rapidly became a tourist attraction. Indeed The Tontine Hotel was built opposite the bridge by the shareholders of the Bridge specifically to accommodate visitors who came from all over Europe as well as the UK. A prosperous town grew up around the bridge which became known as Ironbridge.
The area was an interesting one indeed with its ironworks, potteries, tile works, canals and bitumen pools. In fact in 1837 it was described by Charles Dibdin as “the most extraordinary district in the world”. With all this wealth of industry, it may surprise most of us that, until the 1940s, no one was very interested in industrial archaeology. In fact, the expression ‘industrial archaeology’ was first used by the Birmingham University historian Michael Rix in 1955 and we have LC Rolt to thank for stimulating public interest by his enthusiasm for the restoration of canals.


By the 1950s, the Coalbrookdale Company had been taken over by Allied Iron Founders and in 1959 undertook an early excavation of Abraham Darby’s Old Furnace and opened a small museum to commemorate the 250th anniversary of the original perfecting of coke smelting in 1709.
In the 1960s, a huge new town was planned in East Shropshire 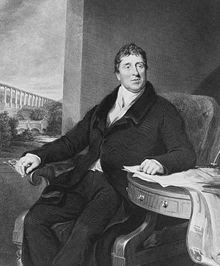 by which time the Ironbridge Gorge was in sad decline and many derelict buildings, both industrial and residential, were ear-marked for demolition to make way for new housing and offices in the New Town which was to be called Telford after the successful civil engineer, Thomas Telford, who was Shropshire’s first Surveyor of Public Works and who built forty bridges in the county.
The Lilleshall Company and Allied Iron Founders were keen to ensure the heritage of the area was not forgotten and encouraged the Telford Development Corporation to halt much of their demolition work in order to protect the early origins of the Industrial Revolution. The young Michael Darby, a descendant of Abraham Darby I and then a student at Birmingham University, became involved at this early stage and is still today a board member of the Museum Trust that was eventually formed . Through their combined efforts, conservation began and the architect of the new town, John Madin, was commissioned to write a report on the practicality of retaining the old buildings. In 1966 he reported that, with care and effort, the area could become of major significance and, thanks to the Telford Development Council and many significant industry supporters and volunteers, the Ironbridge Gorge Museum was set up in the following year.
Telford grew and flourished as did the museum as buildings were renovated or moved, brick by brick, from other locations. The museum sites are located in the Ironbridge Gorge, which in 1986 was designated a World Heritage Site, and spread over a vast area of six square miles. 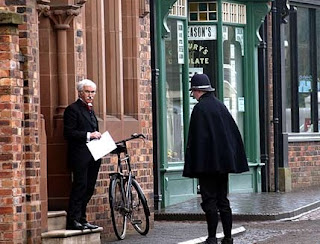 There are now ten family-friendly museums, from the Museum of Iron to the Blists Hill Victorian Town, where you can step back in time and visit a fairground, or sit in a Victorian school and have a lesson from a very strict Victorian teacher. You can exchange twenty first century money for shillings and sixpences and spend them in the sweet shop or the baker’s and eat a pie walking down cobbled streets, passing folk dressed in Victorian costume who will chat to you about the town. If you take a short walk from the Coalport China Museum (European Museum of the Year 1978) you’ll come to the amazing Tar Tunnel where, over two hundred years ago, natural bitumen dripped like treacle into pools and was turned into pitch. You can walk along that tunnel and still see the bitumen oozing through the walls.
You’ll need several days to visit everything but this is a place of delight whether you are six or a hundred and six. A place where you can see and touch and experience how life was lived in another age. This is a living museum. This is history by osmosis
Posted by Barbara Mitchelhill at 09:00

Yes, you've made me want to go, too. If the hotel is still open, there should perhaps be a History Girls joint visit?
x
m

Yes to the History Girls joint visit- you've made me want to go Barbara.