This is an excerpt from VELVET. It is Christmas in London, 1900. Velvet, an orphan, has been asked by her new friend Lizzie to share her family’s Christmas Day...

"Velvet managed not to open Charlie’s present until Christmas morning. When she did, she was disappointed - which was extremely wicked and ungrateful of her, she knew, but she couldn’t help thinking that Charlie’s mum must have chosen
the gift within: a pink-and-green flower corsage for an outer coat, made of felt and not at all fashionable. She’d been hoping that the box might contain a
pretty hair decoration with which to keep back her curls, or even a little silver necklace to enhance the Sunday-best dress that she intended to wear to
Lizzie’s house that day. But what was she thinking of, she admonished herself, for if it had been a costly piece of jewellery or something similar, then she
would have had to return it. A girl couldn’t accept a gift like that from a male friend unless they were engaged - and it wouldn’t do to give Charlie ideas. He was a sweet boy and she liked him very much, but he wouldn’t make a husband for her. He was part of the past which she intended to leave behind.

At Lizzie’s house she was delighted to find that the family kept a good Christmas, the sort she’d never had before. In the doorway hung a kissing ball of ivy and mistletoe, and in the hall the Christmas tree was liberally decorated with candles, gold foil and ivy ribbons. She felt shy at first, but was welcomed so warmly into the family that before long she was joining in
everything - even the raucous singing games around the piano – as if she’d
known them all for years. 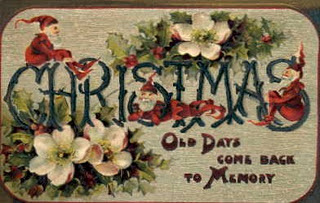 Mr Cameron, Lizzie’s pa, was a source of amazement to Velvet. Whereas her father had always seemed to be teetering on the edge of a display of bad temper, Lizzie’s pa was a
happy-go-lucky chap who whipped off his jacket and waistcoat to show his daughters how to dance the hornpipe, and made paper hats for their dogs. When they sat down at the table and Lizzie’s ma discovered that she’d forgotten to put the stuffing in the breast of the roast goose, Velvet went cold, fearing a terrible row, but Mr Cameron had roared with laughter and called his wife a
flibberty-gibbet, then kissed her and said he wouldn’t have her any other way.

After the goose came a flaming plum pudding containing small silver charms: a
boot, a coin, a top hat, a dog, a lucky horseshoe and a ring. Velvet got the
tiny horseshoe (she decided that Lizzie’s kindly mum had arranged it that way)
and everyone made much of the fact that this was the best token to have and
that the coming year was bound to be very lucky for her. After the meal there
was charades, with forfeits if you didn’t get the right answer in a certain
number of minutes, then blind-man’s buff and – as the afternoon grew more
boisterous - a game with a Ouija board which Lizzie’s sisters played most
enthusiastically, getting in touch with all sorts of “spirits” but failing to
get anything sensible out of them. HSTRETYZZ said one in reply to a question
about his name, WERPRSIT said another when asked where he came from.

At tea time everyone had a barley sugar stick from the tree, a slice of iced fruit
cake and a bon-bon, and when Velvet pulled hers with Lizzie’s mother she was
delighted to discover within it a tiny pair of nail scissors, a paper hat and a
joke (My dog has no nose. How does it smell? Dreadful) which for some reason sent everyone into near hysterics. 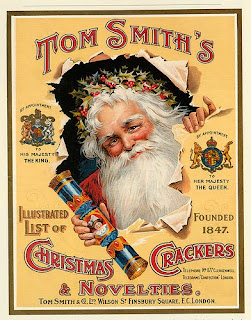 Mrs Cameron on the wonderful fruitfulness of the cake, Velvet, looking around the table and
feeling very happy, wondered if her mother and father had ever had good times together. She decided they had not, for – from as far back as she could remember - her father had been an impossible man to please. Why, only last Christmas she’d made an effort to create a little cheer, buying a ham for their Christmas dinner and studding it with cloves, and her father had sniffed it, said that he hated cloves and thrown the whole thing to the floor.

He’d taken exception to the way she’d decorated the room, too, and tossed the evergreens outside saying they were a pagan tradition which he would not tolerate (although he was certainly not a religious man)."
Posted by Mary Hooper at 01:01

This is one of my favourite parts of Velvet! I would love to see Mary write a whole festive Victorian book! No pressure at all. ;-)

I second that. Love Festive Victorian Christmases...can't wait to read Velvet...this post is a super taster.

My copy of Velvet is on my desk - very much looking forward to reading.

Thank you for this festive posting, Mary. What a delicious taster!

I won Velvet in one of your competitions and absolutely loved reading and reviewing it :)

We've just had snow here in Scotland and it was lovely reading this very evocative post Mary while cosy and warm inside. I'm asking Santa for a copy of this one.

Thank you all, you lovely people!
xxxx