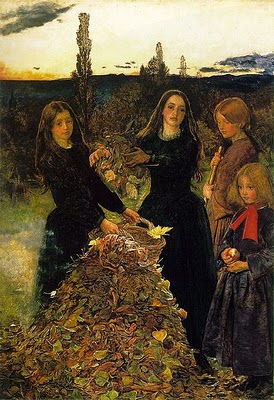 
A few days ago, I went to Tate Britain to view the latest 'blockbuster' exhibition: Pre-Raphaelites: Victorian Avant-garde.

Today, I'm still musing on my reaction to the show, which was more muted than I would have expected, considering my love for the era and art. I found many paintings to be somewhat insipid, even to the point of twee. I found that in life, just as in reproduction, the busy and florid canvasses produced by Holman Hunt are likely to fill me with stark irritation, hardly able to look at one more of his pompous, overblown scenes by the time I'd reached the exit door.

But, what is without doubt in my mind is the fact that, of this group of artists, there are some who really shine for me, and of these my favourites have to be Millais, Burne-Jones and Rossetti; every one of them standing out as great masters above the general throng. And as fascinating as the art are the stories that lie behind their scenes - stories that are, more often than not, linked with the women who they loved; who acted as muses for their art. 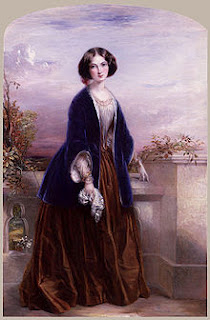 Effie Gray in her youth - painted by Thomas Richmond


Many of Millais' paintings are modelled on the figure of Effie Gray, the woman who became his wife but who, at the start of his career, was married to John Ruskin, the influential critic and patron without whose support the Pre-Raphaelites may never have achieved quite the same success. 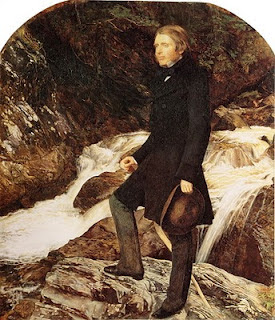 Millais' portrait of Ruskin, produced while he shared a holiday in Scotland with his patron


Millais was often invited to spend time with his patron and admirer. While on a visit to Scotland, both Mr and Mrs Ruskin posed as models for his work. By day the young artist painted. By night he lay in a room in a lodge, only separated from his hosts by a thin partition wall. He could hear every movement and breath of the woman with whom he'd become obsessed - and no doubt he also realised the lack of physical intimacy occurring in the marital bed. 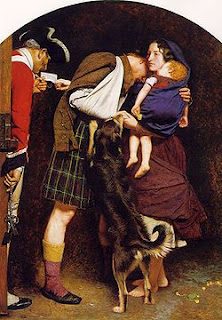 The Order of Release by Millais, with Effie Ruskin modelling as the wife - currently on show at Tate Britain.

Millais' passion for Ruskin's wife led to the three of them being involved in one of Victorian England's most celebrated scandals. Very soon after that holiday Effie left her husband and faced public disgrace when petitioning for a divorce. During the ensuing court case Ruskin was shown to be a man who was cold and detached from reality, who rejected his young wife's amorous requests and left her plagued by nervous distress - the fact of which was illustrated in this letter to her father:

"He alleged various reasons, hatred to children, religious motives, a desire to preserve my beauty, and finally this last year he told me his true reason...that he imagined that women were quite different to what he saw I was, and that the reason he did not make me his Wife was because he was disgusted with my person..."

Much speculation was to arise when these facts were presented in the court as to whether Ruskin's disgust had been at the sight of female public hair or a woman's menstruation. But the fire of gossip was eventually doused. Effie was granted her divorce on the grounds of non-consummation - although only after medical examinations that proved she was a virgin still - after which she and Millais were free to wed. Society re-embraced them and they lived a fulfilled domestic life, during which period Millais produced many more great paintings.

One such painting is Autumn Leaves - an apt image for this time of year when the leaves are beginning to fall from trees and the air will soon be fogged and tinged with nostalgic scents of bonfire smoke. In this scene his wife's younger sister, Sophie, is posed as the girl who is just about to throw more leaves onto the burning pyre. The picture is full of symbolism. The fires of passion about to light in this prepubescent girl. The death of youth and innocence. And what is that questioning in Sophie's eyes as they stare right out of the painting's frame? By contrast, the other girls' expressions seem to be very much 'simpler'. All are engrossed in the pile of leaves rather than who might be watching them. 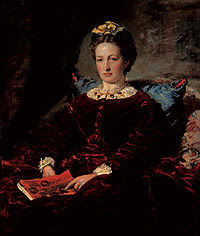 
Could there have been yet another love triangle affecting Effie's marital life - Effie, who by now had grown older and been worn down by regular childbirths, whose husband was increasingly drawn to paint his younger sister-in-law? 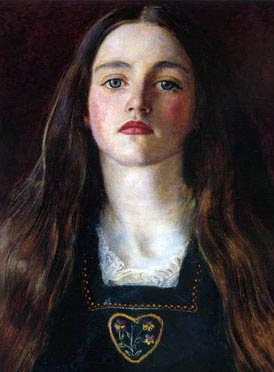 Portrait for a girl (Sophie Gray)


Through other canvasses produced, the viewer is able to view Sophie's transition from a child on the cusp of adulthood to the alluring vision of sensuality where the flushed face is all too knowing, where the red of the lips simply begs to be kissed, and the heart on the front of the model's gown is a blatant statement of growing affection between the artist and his muse.

Whatever happened, or did not, there was talk of Effie being upset and arguments breaking out in the house. The result was that Sophie was asked to leave and, at the age of twenty-four, she suffered a nervous breakdown, going on to exhibit all the signs of what we now call anorexia.

Was that condition caused by Sophie's broken heart? Did the young woman simply wish to retain the form that beguiled her brother-in-law? We shall never know the truth. This affair did not reach the law courts and its intimate details were never exposed as in the case of Ruskin v Gray.

I have a vague memory of reading about this affair. Whatever, I am fond of the pre-Raphaelites, especially the Arthurian themes. :-) It takes me back to my first year of teaching, in which I had to teach The French Lieutenant's Woman, which had three possible endings, one of them with the heroine joining the PRs.

A wonderful post Essie - I never knew about the Millais/Sophie relationship.

Luscious paintings and fascinating insights - thank you for posting!

Lovely to see my fave Pre-Raph painting at the top of this post. All very fascinating!

I hadn't seen the bonfire picture before - it's lovely. I love the richness of colour you get from the pre Raphs... goodness, their women had a hard time of it, though!

What a mystery!
It will make seeing the exhibition all the more interesting.
Thank you, Essie.
Michelle Lovric

Thank you very much for the comments. I am intrigued by all the stories behind so many of the Pre-Raphaelite paintings.

Wonderful post Essie - Emma Thompson has just made a film about it, think it is called Effie, hasn't been released yet, but sounds wonderful. Would love to hear more about exhibition, alas no tube can get me there ( unless it involves a Tardis!)

Oh yes - I went to Venice last year and they were filming on the terrace of the hotel we stayed in. Is it Dakota Fanning in the lead role? Must check. Very much looking forward to Effie the film.

Now I am jealous - Pre-Raphs and Venice - Ruskinian delights! Yes, it is a Fanning, though may be the other one? Not sure...
thevelvetnap.wordpress.com

Autumn Leaves is such a beautiful painting.