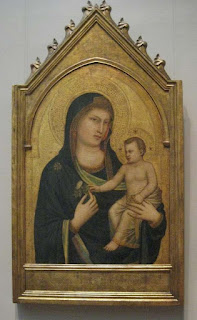 Just a blessedly short blogpost from me today, because life sometimes gets in the way of art or simply sends it spinning sideways.

Speaking of which … only in Italy can the Madonna cure the relentless obscenity that spills out of the football stands, even in a part of the country noted for the ‘turpiloquio facile dei suoi abitanti’ – the fluent foul language of its inhabitants.

At San San Donà di Piave on the Venetian mainland, the local team decided to do something about the filthy chants and shouts of players and fans alike. Fearing the worst in a match against Jesolo, they hung a giant poster of the Virgin Mary on their side of the pitch. You can see a picture of it here.

The directors of the società sportiva Mussetta 2010 explained to a local newspaper, ‘La Madonna rientra nel nostro progetto di sensibilizzazione dei calciatori e del pubblico per una partita corretta e senza bestemmie’ – The Madonna is part of our awareness projects for the football players and the public about the importance of a well-run match without blasphemy.’

Standing at almost two metres in height, the Madonna was placed beside the seats in the little stadium known as Lillo Burigotto, Mussetta. Maria dell’Assunta is a symbol not only of the parish of Mussetta but also of its inhabitants. Davide Finotto, a player for many years, explained ‘For us, Maria dell’Assunta is like the statue of for the . Her image in the stadium should remind us that we are adversaries but also friends.’

By a miracle, the footballers’ and fans’ potty-mouths were cured.

Now the work needs to move on to Montegrotto near Padova where the mayor was obliged to close a little football field near a church because of the imprecations that issued from it.
I myself keep a postcard of a Byzantine icon by a chest of drawers with a sharp corner on which I frequently separate my bare toes, as my cats are still young and impressionable.

Does anyone else deploy imagery from history, mythology or religion to help them abstain from anything that they oughtn’t to do or say? Or to help them in their daily life?

Photo of Giotto’s Madonna by unforth on Flickr
Posted by michelle lovric at 00:30

I love it! Mama Mary watches over her boys to make sure they behave!

It's not exactly similar, but it reminds me of the pervasive awareness of the Evil Eye in ancient Roman times and today in many parts of Greece, Turkey and North Africa. I have a fun souvenir from Mary's shrine in Ephesus (where legend records she lived her final years). It has a ribbon with her portrait on it, two dangly crucifixes and a blue and white glass "eye" against the Evil Eye.

I have nailed it to the wall of my study to keep away bad vibes.

I'm no Buddhist, but I have a gentle stone Buddha in my garden, and can see it from my writing table. So, when the words won't come out to play, my Buddha just sits there as if to say, 'Just chill. It will be fine.' And sometimes it is!

Loved this post, Michelle! And, Jo, I need your desk with a (Buddha) view... that would be immensely useful, I think.

Yes, lovely post. Sadly, I don't think it would work at the English football games I attend.

Very good to see such a fascinating post from you, Michelle. As always, fun and interesting and different from all other posts by anyone else! Thanks!

Being Orthodox I have a houseful of icons. I'm afraid they do nothing to reduce my use of Anglo-Saxon, but an image of Thumper, the Disney bunny wabbit, always serves to remind me 'if you can't say something nice, don't say nothing at all.'

Yeah, but often saying something un-nice gets you much further than saying nothing at all!

Suspect the Thumper bunny would heat up any angry words in my mouth! (As happens, for example, when spotting the comment above mine and below Susan's.)

Such a lovely story, Michelle. Could be straight out of Don Camillo!